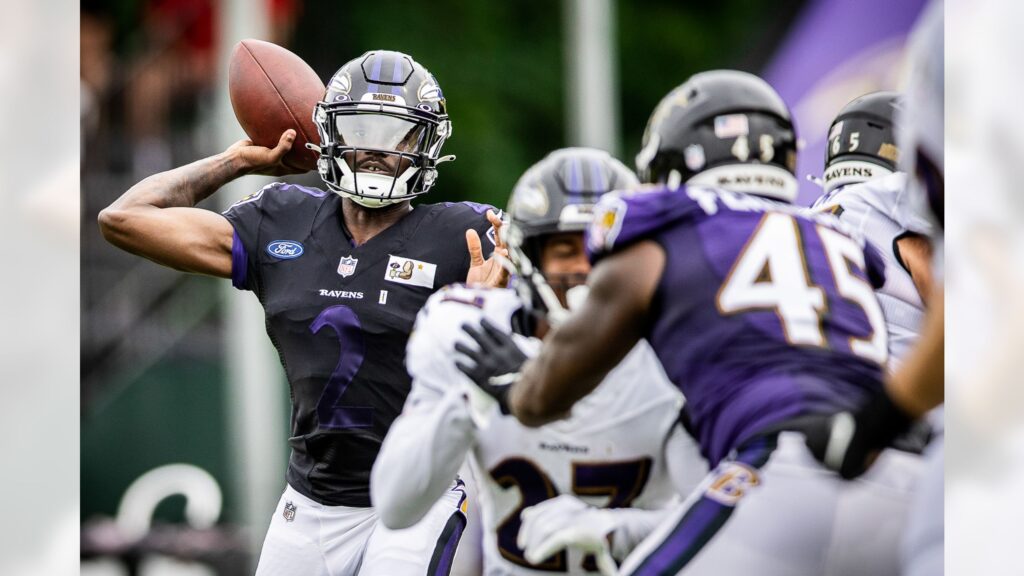 The competition for the Ravens backup quarterback position has been close but through six days of practices, I’d give a slight edge to Trace McSorley. Neither the former Nittany Lion nor Tyler Huntley has set the world on fire but in their defense, the team’s top receivers have not consistently been at their disposal, plus the offensive line has performed poorly up to now.

McSorley is a battler and carries a bit of that veteran moxie despite his limited resume. I could easily see him being a backup in the league for many years due to his workmanlike approach to the game, grittiness and instincts. The reps and experience Trace has received in Lamar Jackson’s absence, will prove to be valuable in his development. but given his average arm strength and below average stature (6’0”), he’s a spot starter at best.

Huntley is slightly taller at 6’1”, has a much better fastball and his mobility is superior to McSorley’s. It isn’t hard to draw comparisons to Lamar, particularly when he utilizes his legs to escape trouble or while directing the team’s RPO run game. His innate tools are simply better than McSorley’s and I could easily see him putting together a career similar to Tyrod Taylor’s.

One last thought on this QB battle. Coordinators like to have backups that can run the team’s offense without much alteration to scheme or game planning. And in this regard, Huntley is the better fit and my pick as the Ravens relief pitcher despite McSorley’s slight edge at the moment.

The offensive line has struggled as a unit. There are just so many moving parts and it may take more time than normal for the starters to gel. Ronnie Stanley might not show up at all during camp. The left guard spot is a revolving door of candidates for the moment and Alejandro Villanueva is trying to settle into a new position at right tackle. And let’s not forget that Bradley Bozeman is manning the controls at center for the very first time as a pro. The potential for a much improved line is there but there’s a lot of work to be done.

Tyre Phillips looks better than he did in 2020 and he has some versatility. Patrick Mekari has played all positions across the offensive front and that is an attractive trait for a reserve. Ben Powers and Ben Bredeson are average players who struggle at times in pass pro and the young UDFA tackles, Adrian Ealy and Foster Sarell are developmental players destined for the practice squad.

By the time the Ravens lace them up for opening night in Las Vegas, I expect the starting O-line from left to right to be: Stanley-Cleveland-Bozeman-Zeitler-Villanueva. But given Stanley’s history of injuries, at the top of Eric DeCosta’s wish list has to be a swing tackle. Andre Smith is NOT that guy.

Heading into camp one of the biggest concerns that many observers had with the Ravens roster was how they’ll account for the losses of Matt Judon and Yannick Ngakoue. Earlier I opined about those losses not being as dramatic as many perceive. I maintain that position, particularly after observing Tyus Bowser, Odafe Oweh and Daelin Hayes during practice. I will however temper my enthusiasm for the time being, because each has feasted on offensive tackle play that has been substandard – for now. Adding Justin Houston helps and with the play from the interior defensive line so far this summer, specifically Justin Madubuike and Calais Campbell, I’m not at all concerned about how the Ravens will replace the 9 sacks that Judon and Ngakoue left behind. But I don’t think that a significant contributor will be Jaylon Ferguson.

Coaches lauded the third-year player from Louisiana Tech this offseason and publicly expressed confidence in Ferguson. But so far, the alleged confidence has yet to manifest itself in practice. Ferguson has been outplayed by rookies Oweh and Hayes. Even Chauncey Rivers has been more threatening to quarterbacks in camp. I hope I’m wrong but I don’t expect much more from Jaylon than what he’s provided in the past for the Ravens.

It has been an annual tradition for fans to fret over the team’s talent (or lack thereof) at wide receiver. Now, they have plenty. When the Ravens roll out Marquise Brown, Sammy Watkins and Rashod Bateman on opening day, this collection of pass catchers will potentially be the best three the team has fielded at one time – with one qualifier. They must stay healthy.

Behind these three are Devin Duvernay, James Proche, Tylan Wallace and Miles Boykin. Duvernay has had a solid camp and Wallace has come on as of late. Most believe that the Ravens will carry just six receivers on their final 53-man roster and that final spot comes down to Proche v. Boykin. If true, it’s no contest. Proche has been one of the summer’s bright spots while Boykin, normally a very good practice player (there have been comparisons to AJ Green – I kid you not), has struggled during camp and now he’s on the sidelines with a hamstring issue.

Boykin’s blocking skills are highly touted but that doesn’t mean that Proche is unable to block. He’s a more instinctive player than Boykin by far and there’s no reason that he can’t refine his abilities as a blocker with commitment to technique and a willingness to be a downfield asset to the running game. Just two thoughts for those supporting the blocking wide receiver. First, if blocking is a WR’s best trait, then he’s really not a wide RECEIVER. Two, how will Boykin support the run game when he’s fifth or sixth on the depth chart?

Truth be told, if you’re hoping for another boundary receiver, Boykin has been outplayed by Deon Cain and Binjimen Victor throughout camp thus far.

JK Dobbins has the makings of a stud RB, particularly in the Ravens offense. He possesses a well-rounded skill set that includes suddenness, speed, power, change of direction ability and balance. Dobbins often draws comparisons to Ray Rice given his size, draft position (both were taken with the 55th overall pick) and jersey No. 27. But for my money, Dobbins is the superior athlete. He has the potential to surpass Rice’s best rushing season (2011) when he ran for 1,364 yards and he’s shown throughout OTA’s and training camp that he’s a very capable receiver. There’s a lot of national hype directed towards Dobbins – with reason.

Down on The Corner

The competition for a roster spot at corner is heating up. The locks are obviously Marlon Humphrey, Marcus Peters, Jimmy Smith and Tavon Young. Anthony Averett is probably safe and under normal circumstances one might think that Shaun Wade will make the cut, given that he’s a decorated collegiate corner from Ohio State and a 2021 5th-round pick. But Wade has been outplayed by second-year player Chris Westry so far during training camp. Wade’s pedigree gives him the edge but the 6’4” Westry has made more impactful plays than the former Buckeye – and it’s not even close. The roster chess move is likely to be Westry to the practice squad since a corner one year removed from being one of the best in the Big Ten Conference won’t escape the waiver wire predators.