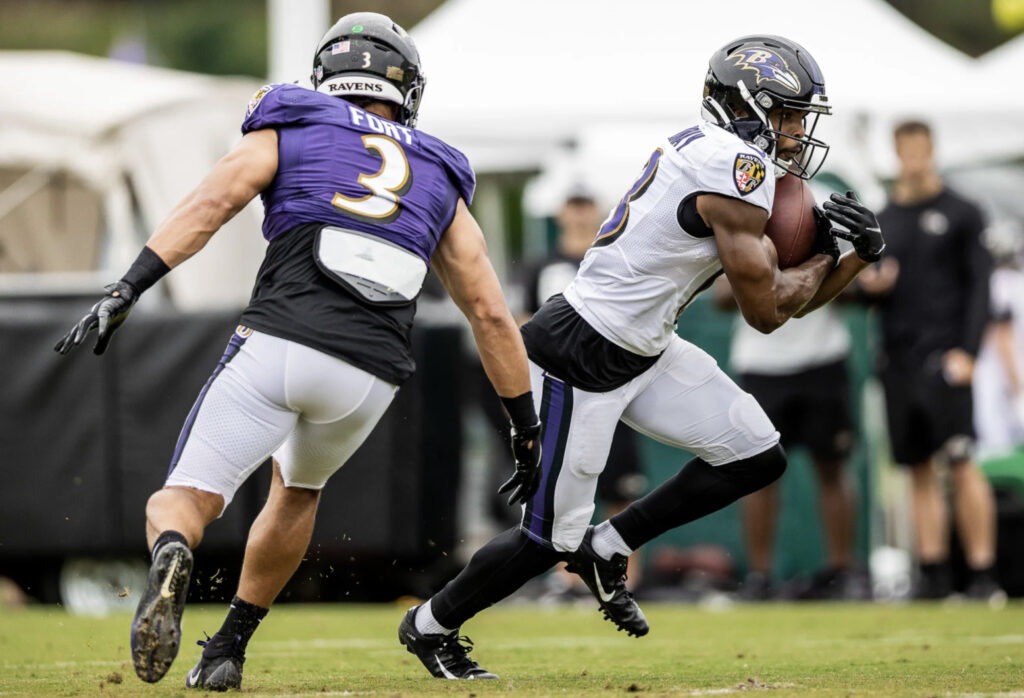 There was the return of a familiar face, the premier of a new one and an all-too familiar image of an oft-injured veteran being carted off the field. Ravens practice on Friday ran the gamut of emotions for those in attendance, but there was also some action between the white lines to digest.

But before we get to the on-field shenanigans, one welcome sight was seeing running back Gus Edwards take part in practice. Fresh off a new contract and a positive COVID test, Edwards got back on the field to a warm reception from the fans in attendance. New signee Justin Houston also made his first appearance with the team, only taking part in a few team drills as he acclimates himself to his new surroundings and scheme.

The sobering part of the day, obviously, was watching cornerback Jimmy Smith being carted off the field after getting tangled up with tight end Mark Andrews during live reps. There was no immediate word on Smith’s condition, so stay tuned…

Looks like ankle sprain for #Ravens Jimmy Smith. Should be okay.#RavensFlock

Let’s get to the nitty gritty of the football that was played on the practice field today, and see who stood out.

— Second-year receivers Devin Duvernay and James Proche continued their strong camps, and both have shown a propensity to get uncovered from their man quickly, present a good target to their quarterbacks and catch the football.

— Tylan Wallace, Proche and Duvernay were fielding punts in position drills at the start of practice. I was just opening my mouth to say this was the “good hands” team when Wallace muffed one, reminding me yet again that I do better at pointing out what just happened than trying to guess what’s going to happen next.

— Last Proche comment, I promise. He and rookie safety Ar’Darius Washington had some nice battles in one-on-one drills, and they both turned to tap each other’s helmets after Proche pulled one in with Washington all over him. These are two tough competitors who rely more on heart and technique than pure physical attributes. They’re both easy to root for, and both have had nice camps to my untrained eyes.

— Back to Duvernay, he seems much-improved in his short-area route-running, as well as his ability to translate double moves into deep gains. This morning, he got the best of Davontae Harris in one rep and hauled in a deep pass. He later got past Shaun Wade for another deep pass from Trace McSorley.

— Chris Westry, Chris Westry, Chris Westry. I’ve covered three practices so far, and Westry has impressed me each time. The 6’4 corner broke up a deep pass to Deon Cain on one rep, flashing good closing speed and ball skills. He’s either a camp star, or the lucky benefactor of my good looks and charm on days I’m at camp. I’m leaning toward him being a very interesting prospect at this point.

— Edwards had some nice runs, as did Justice Hill, as the offensive line seemed to fare a little better today in both the run and pass game. But JK Dobbins just looks like a potential star at this point. He explodes out of the muck sometimes like a shot, and has made more than one defender (on a very good defense, mind you) look a little bit silly trying to corral him in the open field.

— Firmly on my 2021 “Crush List” is running back Ty’son Williams. He shows patience and an abrupt jump cut in the pile of humanity that forms each run play, and has a way of finding a crease to get out into fresh air.