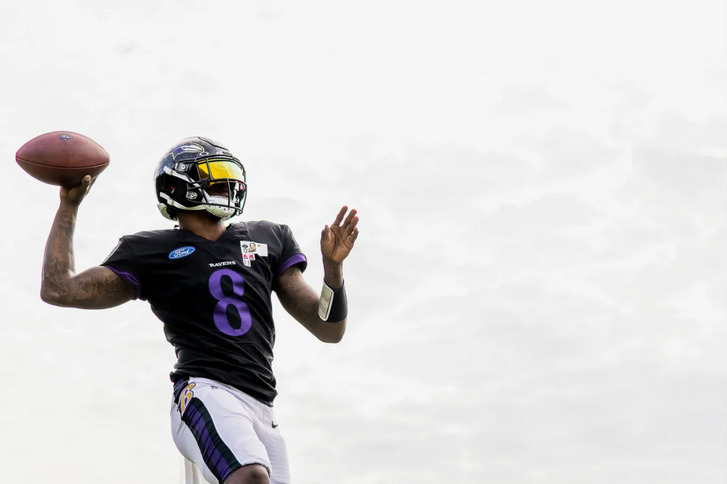 On a field filled with — quite literally — world-class athletes, Ravens quarterback Lamar Jackson manages to appear like he enjoys a distinct physical advantage over everyone else out there. In this morning’s practice, Jackson’s first of training camp and in limited snaps, he still captivated the imagination with one 11-on-11 rep when he scrambled away from the rush, rolled out and lofted a beautiful deep pass off the fingertips of tight end Mark Andrews.

In that moment, Jackson reminded all in attendance of the promise he provides the Ravens’ offense each and every snap — the promise that you could miss something amazing if you look away for even a second.

But it was a somewhat limited appearance for Jackson, and there were a few misses out there that you expect him to complete once the rust comes off with more practice. Still, there was also a back-shoulder throw to Devin Duvernay against Marlon Humphrey and a nicely lofted pass down the middle to Sammy Watkins, who got a step on Patrick Queen.

Trace McSorley and Tyler Huntley, in my opinion, have not been bad this summer. But the offense looks different when Jackson gets behind center.

In other notes from this morning:

— There was a rep during 11-on-11s where I was reminded once again to kind of take a step back with the knee-jerk reactions. I’m not going to mention players, because I don’t want to inadvertently give away any kind of coverage strategies the team is using, but I watched a receiver pull in a pass against a linebacker and heard a coach give a defensive back “the business” for allowing that to happen. So, please, as you read my observations, remember that I’m just going with what my eyes see, and those eyes might not always be seeing what they think look obvious at the time.

— I like watching offensive line coach Joe D’Alessandris work with his unit in drills. He is straight out of central casting with how you’d imagine an NFL offensive line coach should look and act, but he is always providing instruction. Always teaching. You get the feeling he would be a successful manager in any field he so chose.

— Josh Oliver made a nice diving catch on a ball from Huntley in drills. Oliver seems to provide the most out of the tight ends not named Mark Andrews in terms of receiving, and he appears to be a willing blocker. I’m not sure we’re looking at a dynamic third tight end in Oliver if he wins that job, but I think he can be a solid player, health withstanding.

— Deon Cain has made his share of plays in camp, and looked good hauling in a slant from Jackson in tight coverage. Cain does a nice job of using his body to shield defenders, and shows good ball skills on fades. File this under “Things I Didn’t Expect Out of Camp This Year,” but I’m not sure I’d value Miles Boykin over him at this point.

— Duvernay had another nice practice this morning, and is showing an ability to win both deep and quickly off the line. He and James Proche are two of the most improved offensive players I’ve seen this season (is this the impact of coaching additions Keith Williams and Tee Martin?).

— I counted two plays where Odafe Oweh was there to make a sack, two more where he blew up a run play for no gain and another where he seemingly appeared out of nowhere to chase down an outside run on the other side of the field. On one of those “sacks,” Oweh arrived with rookie defensive back Shaun Wade, who also had an active practice playing around the line of scrimmage. Oweh seems to have a high floor from what I’ve seen. Absurd physical abilities that mix with an engine that doesn’t seem to go cold leads me to believe he will make plays this season simply based on the fact that he’s a better athlete than most everyone else on the field. In terms of athleticism, he does remind me of a defensive version of Jackson — sometimes he’s just too strong and fast for the other guy to stop.

— McSorley threw a few nice balls this morning, but one he tossed down the sideline to Devin Gray, that he squeezed in between Iman Marshall and Davontae Harris might have been his best.

— Justin Ellis and Broderick Washington both got penetration a few times to blow up runs, and linebacker Malik Harrison seemed to emerge from the pile on every short run stop. Washington also had another play that could have been a sack if, you know, those things were happening. Justin Madubuike, once again, got in the backfield a handful of times. He is really living up to the hype surrounding him this offseason.

— Proche made an absurd leaping catch in the end zone on a long pass from Jackson, but landed out of bounds. His hands are legit.

— In a battle of training camp stars, Chris Westry was matched up against Proche on a long fade from McSorley. Westry won that rep and the ball fell harmlessly to the ground. Westry had a few more pass break-ups today, and does something to stand out each practice.

— My running-back crush of the summer, Ty’son Williams, made another highlight play today when he caught a short pass, broke through a tackle and turned quickly up the sideline.

— Aaron Adeoye had a pretty active day today, as did Ar’Darius Washington.

— Massive rookie Ben Cleveland got quite a few reps today, and there were some really good reps, and a few where the penetration came from that spot. Remember, however, I don’t know the responsibilities of every player, so what looked good could have been the wrong assignment, and vice versa.