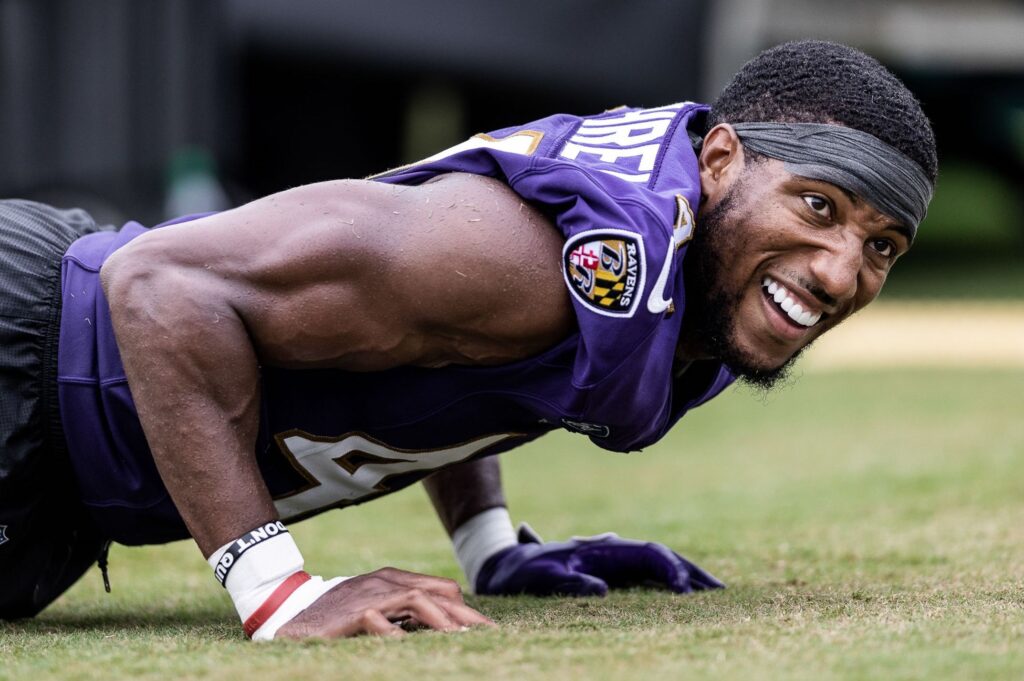 One of the things you hope for from every training camp practice, good or bad, is to escape from the practice injury free. Unfortunately for the Ravens, that wasn’t the case today during the fully padded practice.

Rashod Bateman early during the session, competing in one-on-one drills and drew Marcus Peters. As he’s done throughout camp Bateman made a laser sharp cut, planting his right foot to cut across the face of Peters to present a good target. But Peters read the route and closed on the ball quickly to break it up. In the process, Bateman went down and stayed down for probably 30 seconds that felt like hours. When he got up, he limped noticeably to the sideline where he was aided by a Ravens assistant. A few moments later he popped up, still limping and went directly into the locker room, followed by Eric DeCosta.

As a bystander, it’s hard to focus after such a potential blow is dealt to your club. I’m sure we’ll find out soon enough the severity of Bateman’s leg injury, but the player who everyone believes will alter the course of Ravens history as it relates to drafting wide receivers, just suffered a detour on his journey.

• The quarterbacks were all fairly inconsistent today. There were a few good throws which I will get into later but for the most part they were not crisp at all, particularly McSorley who slammed his helmet into the ground in disgust after a few off the mark throws during 11 on 11.

• The injuries across the offensive line tilt the competitive balance during practice. So much so that at times it appears like the offense as a whole isn’t getting their work in.

• While observing individual drills, the edge defenders had some interesting pairings. Jaylon Ferguson worked with Aaron Adeoye; Tyus Bowser teamed with Chris Smith; Daelin Hayes and fellow rookie Odafe Oweh tangled; while veterans Pernell McPhee and Justin Houston exchanged reps. The groupings were practicing pass rushing technique and took turns alternating between OT and Edge. The biggest takeaway is just how oak strong McPhee and Houston are. You can almost feel their contact from 50 yards away. That thick, organic strength is on par with the likes of former Ravens OLB Courtney Upshaw.

• Back shoulder throws were in vogue today but the quarterbacks were generally off the mark. That might explain why Marlon Humphrey had four passes defensed (PD’s) on four consecutive plays. It reminded me of the definition of insanity.

• Two of the standouts during Training Camp 2021 have been James Proche and Chris Westry. Today the pair competed against each other in a matchup won by Proche. He hauled in a comeback pass along the left sideline much to the visual disgust of Westry. He was but a step off. Credit Proche’s plus change-of-direction skill for the completion.

• Save a decent day or two, Shaun Wade has struggled consistently during training camp days I’ve attended, even against less than first-tier competition. Today he was torched twice by Jaylon Moore on deep throws, one during individual drills, another when the Ravens cut the field in half and work combo routes to one side of the field with three receivers.

• The Ravens have never fielded an offense that executed screens very well. The 2021 edition looks to be no exception. On a couple of attempts, McSorley essentially dirted his attempts. They did connect on one TE screen to Josh Oliver that was well schemed. OC Greg Roman had his guys working on screens shortly thereafter.

• Averett had a very good day today. On one play he went stride for stride with Moore and by the time the pass arrived and the struggle ended, Averett had stripped the ball from Moore as both fell to the ground.

PLAYS OF THE DAY

1. Lining up in the left slot, Watkins ran a post angling for the opposite hash mark. Initially pitted against Humphrey, the corner retreated to a zone expecting help from the middle of the field that never arrived. Lamar dropped a dime on Watkins for a 75-yard score.

2. Shortly thereafter, Mark Andrews was flanked right and drew double coverage. Lamar threaded the needle and got the ball into the outstretch arms of his TE before the safety converged. It was difficult to see from my vantage point who the two defenders were due to the players along the sideline, but I believe it was Averett and Geno Stone.

PLAYER OF THE DAY

Despite this play during which he lost a one-on-one match with Watkins, Marlon Humphrey was without a doubt the Player of The Day.

Probably the only time that Sammy got the best of Marlon today. pic.twitter.com/DmJoNTktWo