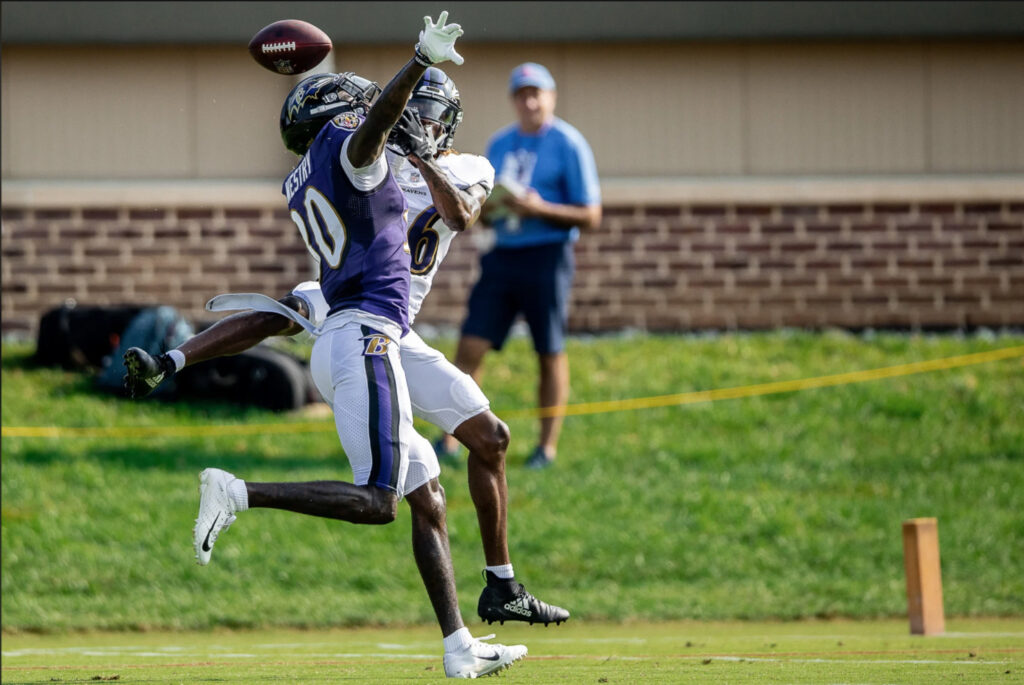 Training camp has seemingly become a bit mundane for some players. It’s right about this time that the monotony of competing against the same players and doing the same things can begin to wear on the gears. Tempers can get testy. It’s part of the grind. Tomorrow the team will have a preseason game walk-through and then on Saturday night they’ll have a chance to compete against players donning a different color – the Saints, after which they’ll get Sunday off.

But until then let’s get to the activity on the field today at the Under Armour Performance Center.

First, let me say it was blistering out there today. I thought that I prepared accordingly by wearing a white Henley t-shirt. But just standing on the sideline watching, the shirt was soaked by the halfway point of practice. I can’t even imagine what it was like for 300 pound athletes running around for 2 hours in helmets. But as noted, it’s part of the grind.

James Proche has been the recipient of many accolades this summer. And he deserves them all. He just seems to outwork everyone on the field and the Ravens multi-media group certainly has taken notice. When James trotted off the field to hydrate, the camera followed him, recording his consumption of Gatorade. There’s a new camp star in town. I guess the videographer didn’t want to miss the next spectacular catch. He notched a few more today. Now it’s time his developing game to the next step – to the preseason field on Saturday.

James Proche stepped up to be the first to take on this cone drill. His work ethic is impressive! pic.twitter.com/wpaZxPdxaf

I was asked my opinion on whether or not Proche has climbed ahead of Devin Duvernay on the depth charts. Only the coaching staff knows that for sure but I will say this. Proche has been used across the offensive front – on the boundary, in the slot and in motion. His route tree is a bit more advanced than Duvernay’s although Devin has better speed and runs more purposefully after the catch. It appears that Greg Roman is trying to connect with Duvernay on slants, screens and jet sweeps to put those skills to use. He did haul in a deep toss from Trace McSorley on a post. The ball was underthrown and enabled Davontae Harris to recover a bit to prevent the score but not enough to prevent the 40+ yard completion.

As for other observations, I’ll break it down into the Good, Bad & Ugly followed by some other notes.

Lamar Jackson had a productive outing all things considered. His throws were accurate and packed a little juice. His best throws of the day included a fade to the back left end zone to Proche, beating Anthony Averett for a 10 yard score. On the very next play Lamar hit Binjimen Victor on a fade to the same location. Victor leaped over Averett and snatched the ball from the defender to haul in the contested catch. I liked Lamar’s timing on the throw and his willingness to let his receive make a play. Victor has been quiet for some time during camp after some really solid showings during OTA’s. Today was a good day the former Buckeye who spent last season on the Giants practice squad.

Lamar also threaded the needle on a throw to Sammy Watkins on a 15 yard crosser between Averett and Chuck Clark…The best long tosses on the day belonged to McSorley. He hit Victor on a 9-route down the right sideline beyond the corner and in time to prevent the converging safety from making a play…on the next play Trace threw a dart inside the hash marks to a tightly covered Eric Tomlinson…Tyler Huntley didn’t do anything particularly good or bad but if today is any indication, judging from the number of reps distributed, McSorley is next in line after Lamar at quarterback.

Victor had the catch of the day – a diving grab on a crosser from left to right during 7-on-7’s. He extended, made the catch, tucked like a gymnast after the catch, went into a roll, popped up immediately and started running before being touched. Put that play on the Red Zone on a Sunday and Victor is a rock star… Mark Andrews continues to move very well and it appears that G-Ro is looking to exploit the matchup problems the big tight end creates. He’s such a big target, knows how to get open, has refined his route running and now he’s been taking reps with the wide receivers, which suggests to me that the Ravens will use him outside the numbers more frequently in 2021…The only successful screen today went from Lamar to Ben Mason who made a nice grab on a low dart. It was the only time in recent memory when I saw a wall of blockers properly set to spring the screen.

Defensively, Chris Westry continues to impress on the boundaries. He had a couple of passes defensed today in the end zone. If there’s one weakness to Westry’s camp performance is that he struggles in the slot against smaller, quicker receivers. It’s a challenge for him to compete inside the numbers because he’s so long. But outside the numbers he’s been a beast throughout camp…Marcus Peters had a productive practice, picking off one pass from Lamar and nearly had another that would have gone for a pick-6…Kristian Welch had a pick-6 off a screen pass delivered by McSorley that caromed off the hands of RB Nate McCrary…Geno Stone is starting to assert himself with well-timed blitzes. He would have produced two sacks today, both on Lamar…Averett, filling in for Marlon Humphrey who got the day off, made a nice recovery on a 9-route down the left sideline thrown nearly perfectly by Lamar towards the waiting Watkins. Averett deflected the pass with a late close on the ball.

The offensive line continues to look like patchwork – probably because it is. MIA’s today included Ronnie Stanley, Alejandro Villanueva, Ben Cleveland and Kevin Zeitler. This remains the camp’s biggest disappointment. Without them, the line can’t develop the needed cohesion and it stymies the development of the passing game. At times today the Ravens tried Ben Powers, Michael Schofield and Tyre Phillips at tackle. Phillips was flagged at LT for a false start. He was pulled from the scrimmaging afterwards, by a frustrated (O-Line Coach) Joe D’Alessandris…Trystan Colon spent some time at left guard…Tylan Wallace made a nice move on a crosser to beat Harris, only to have the corner catch up from behind and strip the ball…Maybe it’s because Lamar is so confident in his escapability, he seemingly ignores DB’s showing uncontested blitzes off the edge. He’ll need a pre-snap answer for that come September. If today had been live action, he would have been hit no less than three times on such blitzes.

The Ravens have never executed screens effectively, at least not with any consistency. This training camp has featured more of the same. I’m not sure if the line prematurely tips off defenders or the intended receiver or even the quarterback. It might be all of the above ruining the intended deceptiveness of the play. Maybe G-Ro and Joe D. should study film of Andy Reid’s teams…McSorley missed a wide open Duvernay on a right to left crosser. The ball sailed, Duv tried to make a play but only managed to tip it into the waiting arms of DeShon Elliott who made the pick.

One-on-one drills are always fun to watch despite the fact that the defenders are at an extreme disadvantage. The quarterback’s vision is clean and he has plenty of time to throw without having to worry about other defenders dropping into coverage. A win by the defender is a big one. Here’s what I observed today: 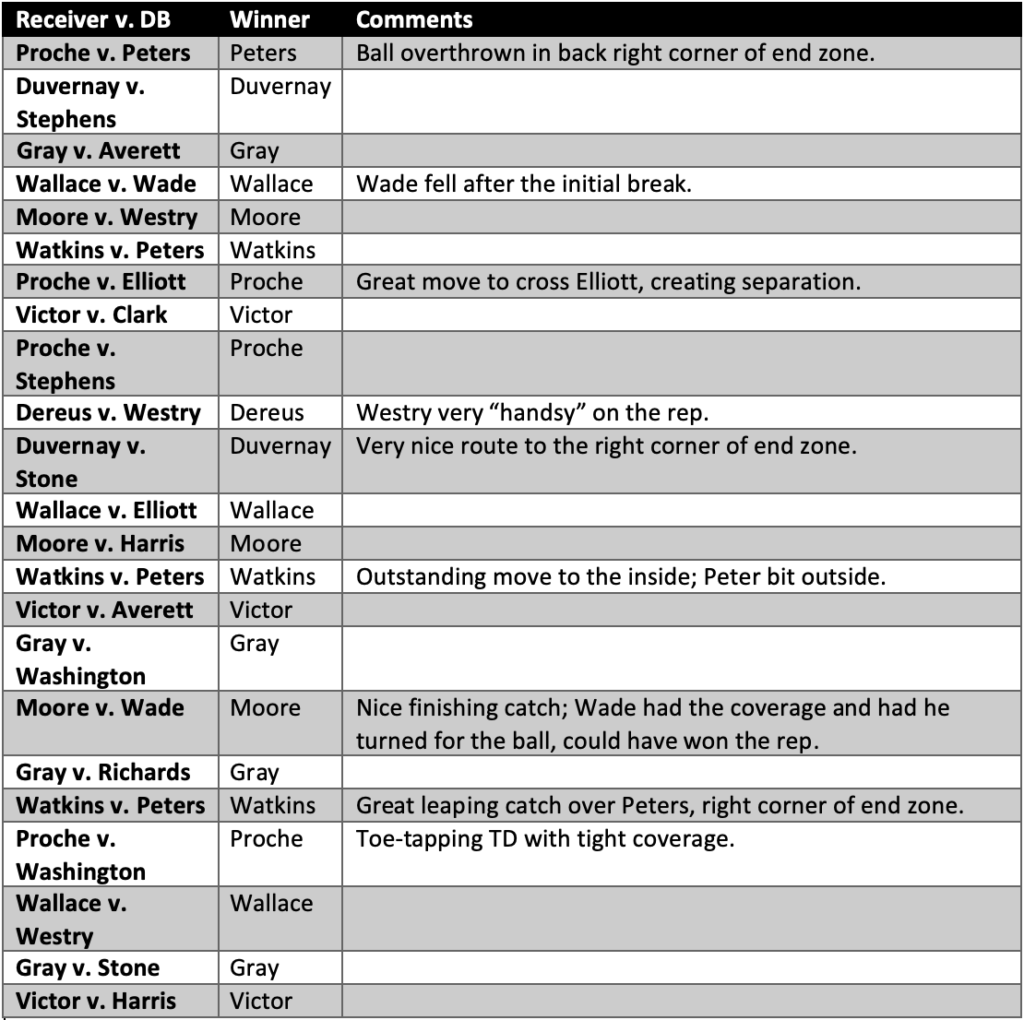 This is the result of red zone scrimmaging, both 7-on-7 and 11-on-11. The situation is predetermined by the coaching staff and isn’t necessarily determined by the success or failure of the previous play. 1-10-13 means first and 10 from the 13 yard line. 3-G-08 means third and goal from the 8. 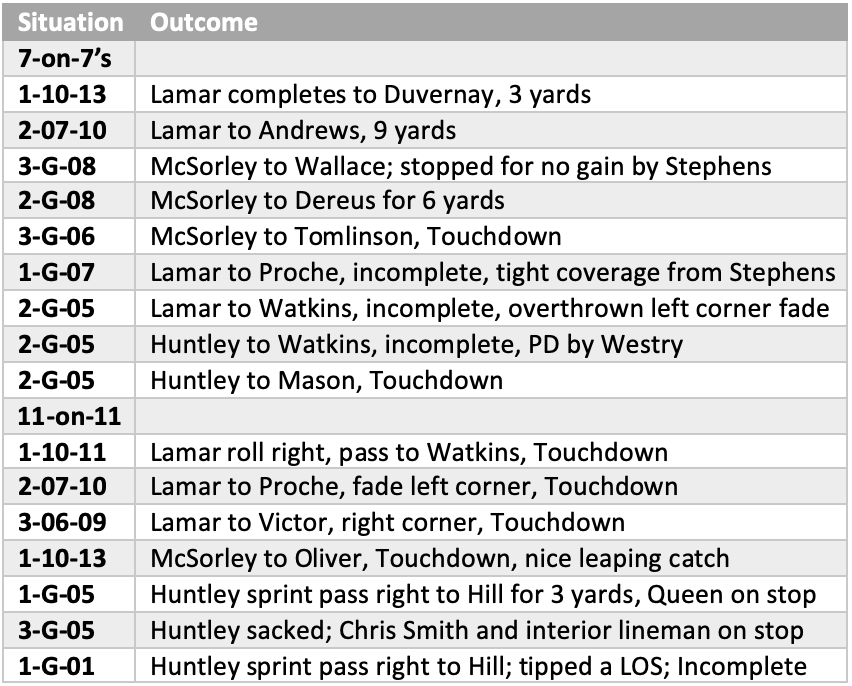 • Justin Houston has managed to get his No. 50 from Otaro Alaka who is now wearing No. 56. No word on whether or not a transaction took place to enable the swap.

• There are only two more training camp practices scheduled for 2021 in Owings Mills. Next week (August 18 & 19) the Ravens will travel to Wofford College’s Gibbs Stadium in Spartanburg, SC to scrimmage against the Carolina Panthers before they get set to make the 77 mile trek from Wofford to Bank of America Stadium for the Saturday night (8/21) preseason game.

• Forecast for kickoff on Saturday night at The Bank calls for partly cloudy skies and a 37% chance of rain. By 10PM the chance of rain and thunderstorms increases to 51%.