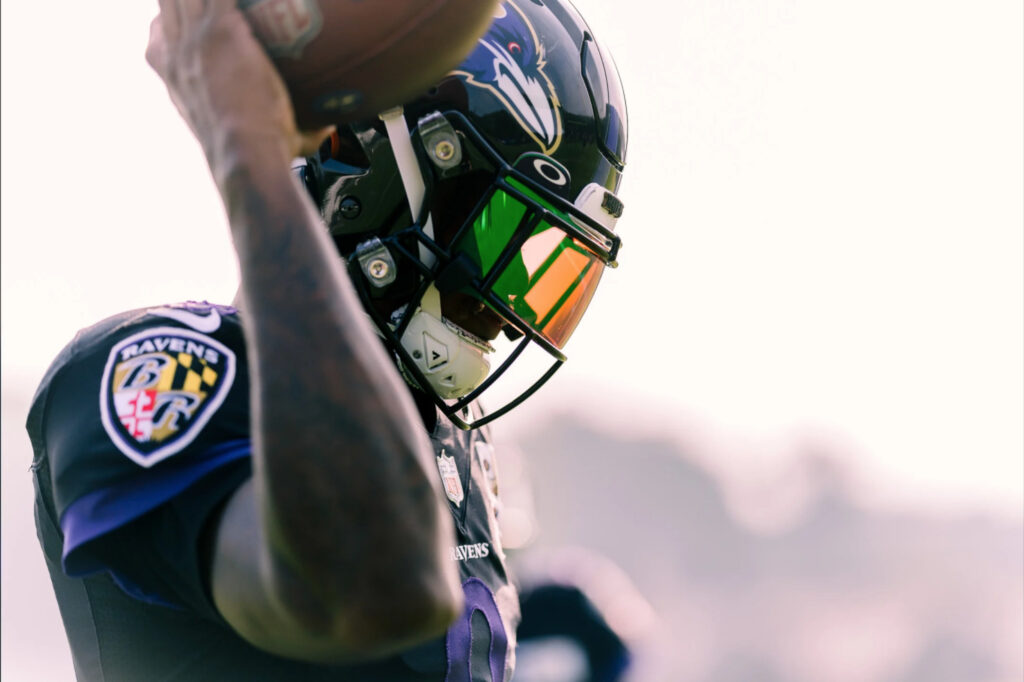 Training Camp in Baltimore has come to a close as the Ravens head down to Spartanburg, SC to get in their work with a couple of scrimmaging sessions v. the Carolina Panthers. Today, we look back on the 15 sessions at One Winning Drive and address a few questions for the inquiring minds of fans who have reached out.

Training Camp is now a wrap, at least here in Baltimore. Looking back at those 15 practices, what is your biggest surprise? Biggest disappointment?

Todd Karpovich (“TK”): The biggest surprise is how well James Proche has played. He’s been the best player on the field over several practices. I thought Proche entered training camp on the bubble, but he has played his way onto the roster, leapfrogging the injured Miles Boykin. Proche, however, had only two targets and one reception for eight yards against the Saints. Targets could also be a challenge during the regular season.

Ben Cleveland has been largely a disappointment. He has not looked comfortable adjusting the pro level and has been stiff with his blocking. He missed almost a week of practice and the first preseason game because of a concussion. He has much ground to make up before the end of training camp.

Darin McCann (“DM”): I came into camp with some preconceived notions about certain position groups, and one of those was the running back unit. JK Dobbins, Gus Edwards, Justice Hill. Easy as one, two, three. But Ty’Son Williams caught my eye enough to take notice the first practice, and he just kept stacking run after run, day after day. I feel like Hill brings something to the team that the others don’t in terms of getting to the outside and being that real change-of-pace guy, but the way Williams chop-steps his way through traffic before shooting for the crease just feels like a really good match for the Ravens run game. He was not even on my radar coming into his, but I think he’s an NFL back now — either in Baltimore or somewhere else.

As far as disappointments go, the offensive line has been stunningly bad. Obviously, health has played a major part in that, but health happens during the regular season, too. This does not appear to be a unit that is built for a 17-game schedule and hopefully a playoff run. The depth in some areas looks pretty ugly to me.

Tony Lombardi (“TL”): When the Ravens signed CB Chris Westry to a reserve/futures contract, fresh off the Cowboys practice squad, I had no expectations other than Westry being another warm body in camp. Let’s face it, the Cowboys secondary was pathetic in 2020 and if Westry couldn’t stick there, how could he possibly stick in Baltimore? Well folks, he probably will.

Westry is long (6’4”), has good speed and with his wingspan, he has great recoverability. The eyeball test suggests that he ranks among the top performers in terms of passes defensed during this camp. He is strictly a boundary corner but if he can take to the field on Sundays what he’s shown consistently throughout camp on the practice field, the former Wildcat from Kentucky will provide quality depth when the injury bug inevitably bites the secondary.

As for disappointments, that’s an easy one. The ENTIRE offseason we all questioned how the Ravens would improve their passing game. On paper they have. On the field – TBD. The combination of Lamar’s illness along with injuries across the offensive line and to the receiving corps have stymied the development of the passing game. The season opener is just 26 days away.

What will be the most difficult roster decision facing John Harbaugh, Eric DeCosta, and the rest of the coaches and front office personnel?

TL: Two draft picks have not played particularly well this summer – both 5th round picks. Ben Mason was a headscratcher from the jump given the presence of Patrick Ricard. The Ravens brass can talk about Mason as a tight end all they want. He looks like nothing but a fullback and what team carries two? Shaun Wade looked like a draft day steal given his pedigree and the way he performed at Ohio State in 2019. But he’s struggled and has been regularly beaten by players like Jaylon Moore and Devin Gray. If the Ravens expose him to waivers with the hopes of landing him on the practice squad, I think that strategy will fail. A CB from OSU just looks too inviting to snatch up, particularly to a cornerback-needy team. Mason is the more likely release since fullbacks aren’t particularly in vogue. Of the two, Mason is more likely to fall back into their lap but either decision is tough. We all know how the Ravens value draft picks.

TK: The Ravens will likely only carry six wide receivers. As it stands today, those players are Marquise Brown, Sammy Watkins, Rashod Bateman, Devin Duvernay, Proche, and Tylan Wallace. However, Boykin was a third-round pick in 2019, so do the Ravens want to give up on him? Deon Cain has flashed when he’s been on the field. Will he be able to be stashed on the practice squad? The injuries to Brown, Boykin, and Cain have also made this situation murky.

DM: There is going to be a quality NFL defensive back that does not make this roster, either through trade or release, and that just has to be a difficult call for the decision-makers in today’s pass-happy league. There are guys making plays each and every day out there — lots of guys. And we haven’t even seen a lot of Jimmy Smith recently because of his injury. The Ravens have loaded up on the back end, including an intriguing talent that wasn’t much on my mind pre-camp in Chris Westry, and that’s a really good thing. But there will be some tough decisions going forward. 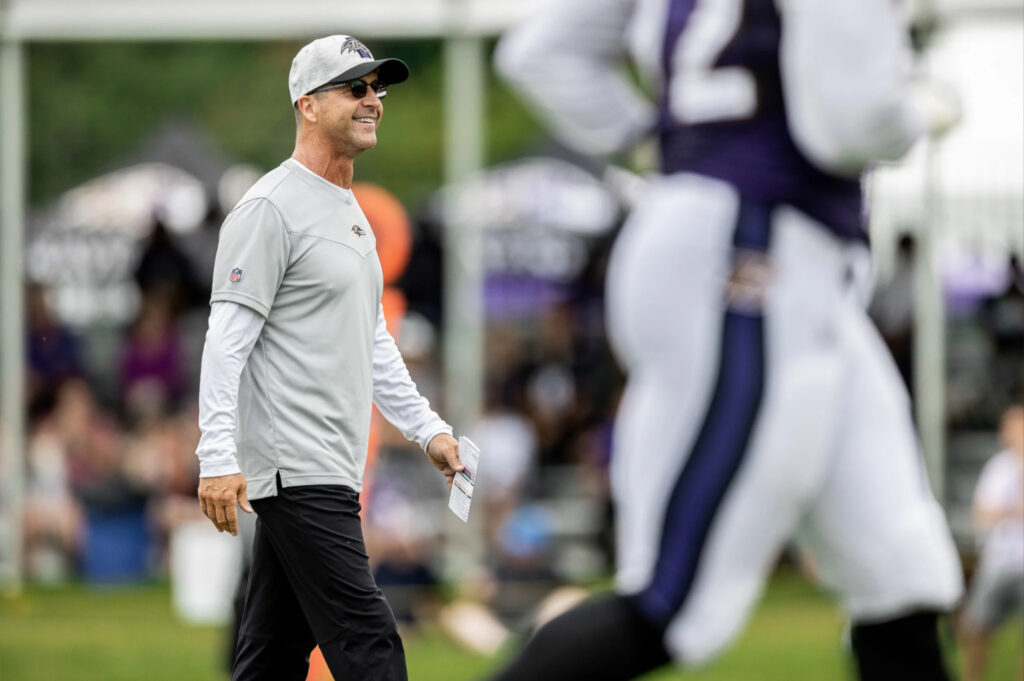 Of the Ravens 2021 draft picks, which best fit these descriptions:

DM: For best value, I’ve been impressed with fifth-rounder Daelin Hayes. I don’t think he’s going to come in and put up 10 sacks, or really even get a lot of snaps, barring injuries. But he always seems to be around the ball when he’s on the field, and if you can get a good contributor on a strong defense in the fifth round, well, that’s a win in my eyes.

The head-scratcher for me continues to be Ben Mason. Unless they have already made up their minds to let Pat Ricard walk next season, this one feels confusing to me. It’s honestly nothing against Mason, and I haven’t seen him stand out in a negative way. But when you have a roster that is going to force you to make some hard decisions down the road, I still don’t get this one.

The future star of this class, to this point, looks like Odafe Oweh. I just think his floor is extremely high with his athleticism, motor and ability to defend the run. Even if he doesn’t become that coveted sack artist the team has seemingly been hunting, I don’t see how Oweh doesn’t become a very good player. He just has too much going for him.

• Best Value ~ Daelin Hayes. Just a smart, instinctive player who might never be a Pro Bowler, but certainly a steady contributor.
• Head Scratcher ~ The aforementioned Ben Mason
• Future Star ~ Rashod Bateman. He provides steady speed; great change of direction skills and his movements are so efficient that it creates natural separation. He just looks like the total package. 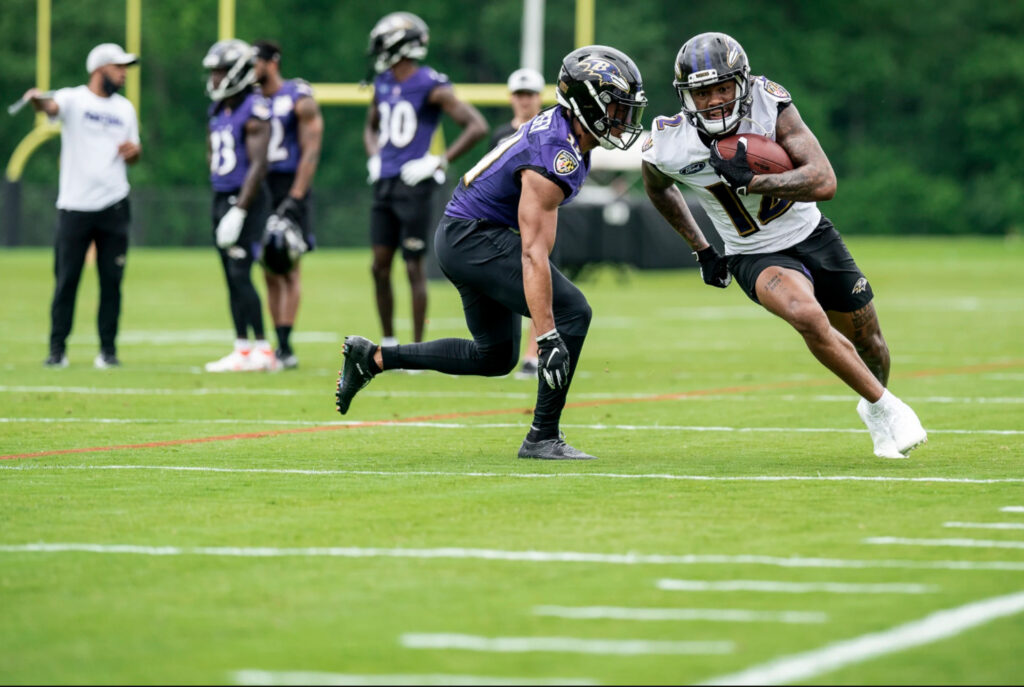 If you were EDC, what roster augmentations are you working most diligently towards?

TK: Eric DeCosta solved the biggest question mark on the roster by adding Justin Houston to boost the pass rush. Now, the offensive line could use another swing tackle or guard for depth. This unit is already banged up and we haven’t even played a regular-season game. However, every team in the NFL needs support on the offensive line so there might not be much help available Perhaps, DeCosta pulls the trigger on a trade before the regular-season opener, but that is doubtful at this point.

TL: The Ravens seem to have addressed offseason questions in the wide receiver room and with the arrival of Justin Houston along with the promising rookies, Oweh and Hayes, the pass rush should improve, particularly with the push in the middle courtesy of Calais Campbell and Justin Madubuike (who I nearly labeled “future star”). But so far, they’ve failed to adequately address depth across the offensive line. I know that EDC pulled off a slick move signing the injured Ja’Wuan James who if healthy, is the EXACT type of player they need in 2021. But since he isn’t available, finding that guy now – that swing tackle, is paramount to the success of Joe D’Alessandris’ group. Who among us thinks that Ronnie Stanley will be available for 17 games? Who among us thinks that Tyre Phillips or Andre Smith or Adrian Ealy is that guy to fill in?

Cue up the crickets…

DM: If I’m EDC, I’m still trying to improve that offensive line. I know they’ve put a lot of emphasis there, but I’d feel better if a swing tackle stood out, or there were a few players really battling for one of those interior spots. You’d ideally like to see real quality competitions here the way it exists with the defensive backs. 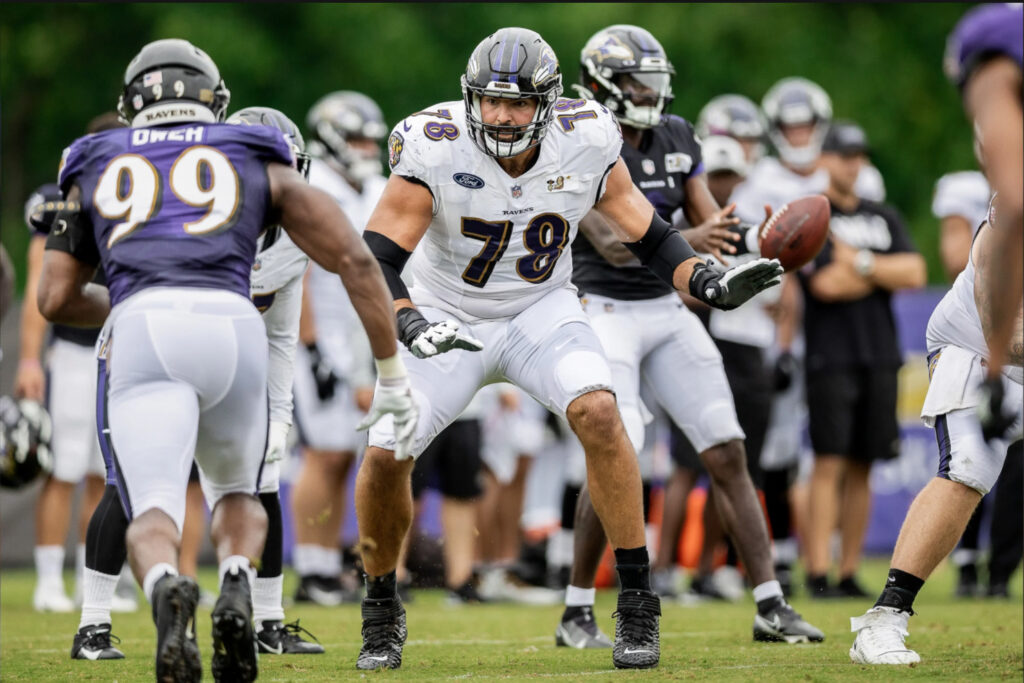 Has training camp improved your outlook for the Ravens 2021 season, diminished it, or have you left with the same outlook? And please explain why.

DM: I feel probably the same. The offensive line concerns me more than I had anticipated, but the pass rush looks better and some of the young receivers — like Devin Duvernay and James Proche — have looked markedly improved this year. It would be nice to get through all these nagging injuries to get a better idea of what we’re looking at overall, but they’ve been pretty fortunate in not stacking up some season-enders that can really torpedo a season before it starts. I think they look like a contender.

TK: I was highly confident about the Ravens entering training camp but now I am a bit less optimistic. First, Lamar Jackson missed a week of practice after contracting COVID-19. The vaccine issue will follow him around the entire season. If Jackson misses time in the regular season, the Ravens could be in trouble. Then, the team has dealt with a myriad of injuries at wide receiver and on the offensive line. How long will it take for these players to get in sync once the regular season starts? Finally, the Browns look impressive and their roster is loaded. They will be a formidable challenge. I am also still bullish on the Steelers. Their defense is going to be fierce and they should be able to run the ball with Najee Harris in the backfield.

TL: If they stay healthy, the Ravens defense has the chance to be dominant and I think that they can carry the team early in the season, particularly if they can run the ball as they have since Lamar’s arrival. I don’t think they’ll have the offensive firepower to knock off the Chiefs in Week 2 but they could later in the season as Greg Roman’s boys begin to gel in the passing game.

Each season a team’s first goal is to win their division. I’ve already written off the Steelers and the Bengals. And that leaves Baker Mayfield & Co. The Browns are loaded but can Mayfield provide consistency? I’m not sure that he can but he’ll compete enough to make the battle for the AFCN crown a dogfight to the finish. Put me down for a (12-5) season for the Ravens, good enough to win the division by virtue of tiebreakers.