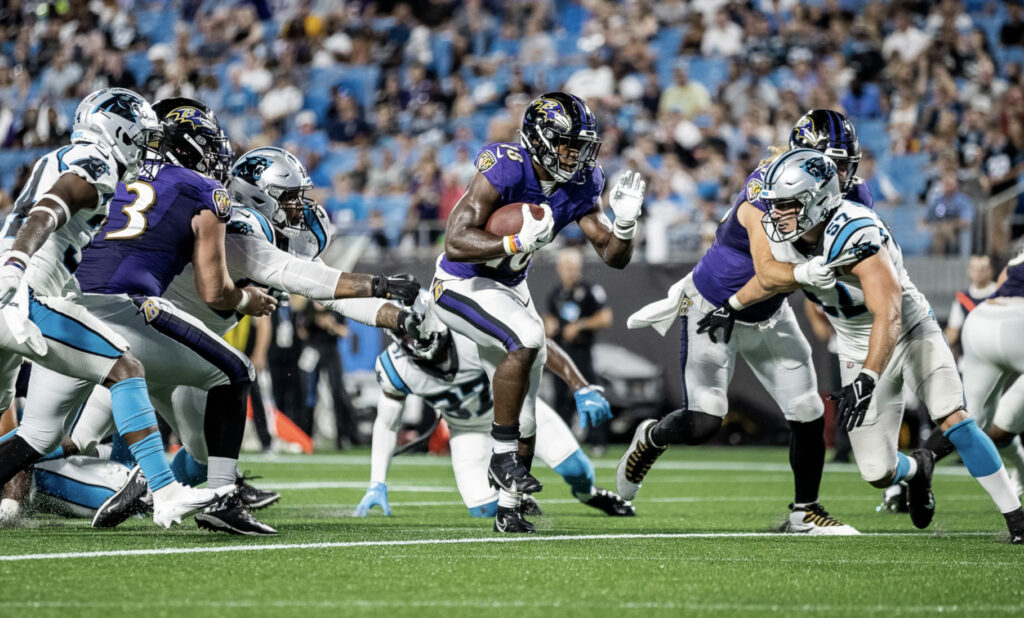 Though the win against the Panthers extended the Ravens’ preseason streak to a record-tying 19 games, there will probably be more tape-slaying than celebrating by the decision-makers at The Castle. The performances on the field will provide more data to the team, joining up with what has been seen on the practice field, in the classrooms and during the preseason opener against the Saints.

So, yeah, the win is cool, and the streak probably does show a level of commitment by the organization (along with some consistent strength of defensive depth the past several seasons), but the preseason games are just another source of information.

So, as we did after the Saints game, what did we see against the Panthers that is consistent with what we’ve seen from this team to this point?

— Tyler Huntley basically took the backup spot by default following Trace McSorley’s injury, but it’s not like he was doing anything to really lose it before that. He has shown some ability to dazzle with his athleticism, he throws with an understanding of leverage that allows him to complete passes without pinpoint accuracy, and he plays with a level of confidence that belies his relative inexperience. He showed all of that against the Panthers, and probably gave enough confidence to the powers-that-be that they do not have to start scouring other rosters for a better backup plan.

— Running back Ty’Son Williams has impressed onlookers in practice and both preseason games. He has nifty feet, runs with power when he explodes and always seems to fall forward at the end of his runs. His gritty, contorting highlight run for a touchdown Saturday night was all of Williams wrapped up in one play. Williams looks like a guy who can be an impact runner in the NFL — he will have the chance to show it, either in Baltimore or for some other team that takes advantage of the Ravens’ tight numbers game.

— Running back Nate McCrary ran with some power and speed Saturday night, and he’s shown that a bit in practice and the Saints game. He seems a little less certain when he makes up his mind than does Williams, but he does consistently grab the eye with some natural skills. He would seem to be an ideal practice-squad guy.

— Tight end Josh Oliver does a nice job in finding space in zones, and using his body to shield man defenders while presenting his quarterback with a good target. I like that about him. It’s a nice skillset. He’s probably just about sewn up that third tight-end spot (which means the Ravens are going to make a shocking trade in three… two… one…).

— The offensive line seemed to do a better job Saturday night at the start of the game, even though it obviously wasn’t perfect. Health withstanding going forward, they still have time to get their starting unit back and getting in sync before the season-opener. But they might want to, you know, get going on that pretty soon. The second- and third-team guys looked pretty solid in the second half, but they had a lead and were leaning on the Panthers’ defenders by the start of the fourth quarter. That lightens the load some.

— The Ravens defense has looked good in practices and both preseason games, but there has been a tendency to have some pass plays with opposing receivers running free, as well as some substantial runs sprinkled in amongst otherwise strong run defense. Could be the chemistry of different combinations on the field. Could be the team working on different things. Could be isolated cases of collective brain flatulence. I’m not overly concerned yet, but it’s popped up from time to time.

— The Ravens defensive backs look Oh-my-God-good this offseason — basically every time they’ve laced’em up. The entire league recognizes the starters as such, but this goes deep. Very deep. There are going to be some very talented players not wearing purple and black after cutdowns.

— Jaylon Ferguson had a quiet start to camp, and seemingly showed up a little bit more with each practice. I feel as if he’s been very active in both preseason games and is making a real play at securing his roster spot. Getting home on some rushes in practice this week could go a long way for Ferguson.

— Justin Madubuike ran down a screen play to force the ball-carrier out of bounds Saturday night and I laughed. Then I rewound and he did it again. I just laughed. He could really be on the verge of something big. Super talented guy with a terrific motor.

— The Ravens got a good opportunity to get their hurry-up field-goal unit on the field at the end of the first half, and Justin Tucker nailed the kick. Honestly, this was probably ideal for coach John Harbaugh and his staff in terms of getting “live-fire” work on a situation that happens quite a bit during a season. With a new long-snapper in the fold this year, any opportunities to simulate actual conditions is a “win.”