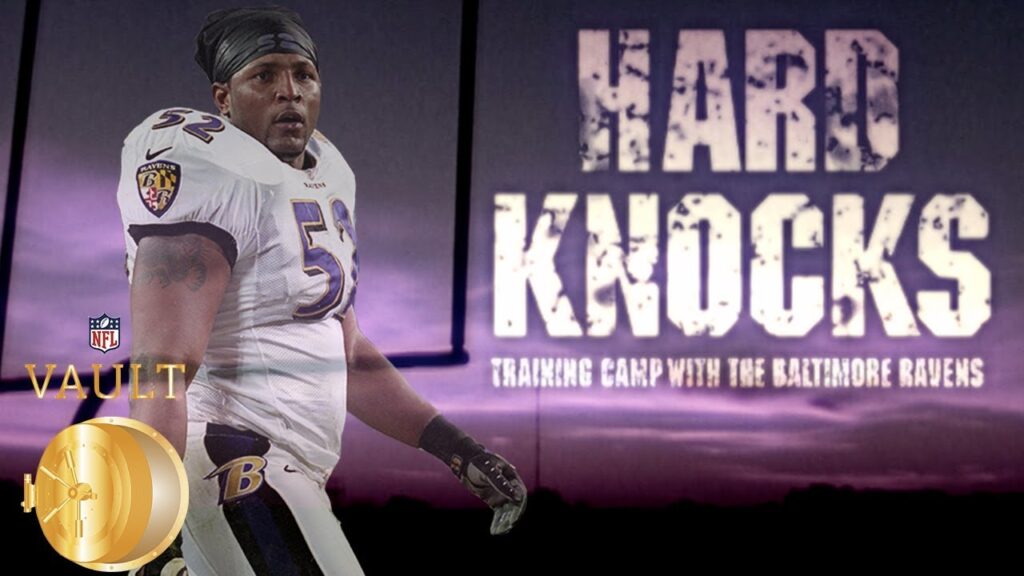 Last night after the Orioles snapped their 19-game losing streak with a 10-6 win over the Los Angeles Angels, I started to surf around for something to watch and landed on HBO’s Hard Knocks with the Dallas Cowboys. I was a few minutes into the show when it dawned on me how boring “America’s Team” is. Thoughts quickly traveled to the very first season of Hard Knocks featuring the Baltimore Ravens. So I grabbed my Xfinity remote and said, “Show me Hard Knocks featuring the Baltimore Ravens”.

And in a moment, it was as if I hopped in Doc Brown’s DeLorean and went back 20 years in time to visit with Brian Billick, Ray Lewis, Shannon Sharpe, Tony Siragusa and the rest of the returning Super Bowl XXXV Champions.

Twenty years, two decades – they have a way of making details a bit fuzzy, memories somewhat distant. I embraced the reset of those memories and despite the dated look of the inaugural Hard Knocks, I enjoyed these episodes infinitely more than those pimping the 78-year-old Jerry Jones and his restless quarterback, Dak Prescott.

Goose and Shannon for the most part stole the show, along with some great theatrical storytelling from Billick. Those details weren’t lost upon me in the 20 years since. But a few of the subplots were blurred by time and it was enjoyable to catch up. I’ll do more of that during the evenings ahead. Those subplots included the struggles of an undrafted quarterback, Ortege Jenkins, who was intimidated after being forced into competition with Elvis Grbac, Randall Cunningham and Chris Redman; a UDFA CB named Reggie Waddell trying to make the final 53; a teacher, Kenny Jackson, trying to make the show as an NFL linebacker; Dwayne Missouri, an edge rusher from Northwestern, who flashed a bit in preseason and later had cups of coffee with the Cowboys and 49ers.

It was also interesting to see Joe Douglas, now the Jets GM, playing the role of The Turk, knocking on hotel room doors to notify players who couldn’t make the grade that Coach Billick needed to see them, with a reminder to “bring along your playbook”. Douglas even compared the thankless job to that of the Grim Reaper.

We’re entertained for sure, but to see the lifelong dreams of these young men shattered is humbling. Throughout their respective lives, they each found success on the gridiron until they went head-to-head with the world’s best. And despite the talent that placed them upon a pedestal during their formative years, through high school and into college, the burning torch that ignited their ambitions, for all intents and purposes, flamed out with Douglas’ knock upon their door. When Billick asks Jenkins if he has his degree to fall back on or if he might consider NFL Europe, it’s as if the gauntlet of reality crashed through the ceiling and into the floor that separated the coach and the NFL hopeful.

I know I come from a biased perspective, but the original Hard Knocks stands the test of time and for my money, the best of all the program’s sixteen seasons.

One Day at Training Camp

During the summer of 2005 I covered Ravens training camp at McDaniel College in Westminster, MD. Then, Brian Billick was the head coach, technology wasn’t what it is today and Twitter was but a concept imagined by Jack Dorsey, Noah Glass, Biz Stone, and Evan Williams. Billick wasn’t as hard on the media as John Harbaugh is today in terms of what is permitted in reporting and how it is reported. Back then you could kneel on the ground while watching practice. I did that regularly to allow the fans in the stands behind me to enjoy a clearer view of the field. Most reporters were not as accommodating. They didn’t connect with fans as I did and still do. They weren’t one of “us” by design in order to preserve their objectivity.

I recall one afternoon practice in August of 2005. It was your typical Maryland boiler – hazy, hot and humid. Gary Zauner was the Ravens special teams coordinator and on that afternoon, he put his punt team through the paces, making sure that all were doing their part to make the overall scheme work. Roderick Green ran reps as the punt team’s gunner.

Green was the Ravens 5th-round pick in 2004. At 6’2” and 270 pounds, Green was a chiseled athlete whose speed was uncommon for his size. He never really fully tapped into the potential of his physical gifts in the NFL but if he had, he could have been a player not unlike Adalius Thomas.

During this practice session, I took a knee upon a towel with my cell phone nearby along with my trusty spiral notepad that opened horizontally. I was positioned behind a broken yellow line, 5 yards outside of the field’s sideline. That’s where the media gathered. No other media member was around. It was my first training camp covering the team. Ambition raced through my veins; adrenalin fueled my thirst to provide the best camp notes possible. Somehow I had to separate what was then Ravens247.com from mainstream media. I knelt there alone.

The punt cut through the heavy air and as it did, Green sped by me from left to right, 15 feet away. A second or two after he passed, the pages on my notebook flipped in the same direction as Green. The combination of size and speed generated by this massive linebacker triggered an aerodynamic drag that shuffled my notes.

Perhaps it was coincidental and a natural breeze was simply in synch with the forces created by Green. But as I regained the right spot in my notebook, I couldn’t help but to think what it might feel like to be the punt returner and then being hit by that freak of nature. If given the opportunity to choose between Green or running full speed into a conversion van, I may have opted for the van.

As fans and observers of the NFL, we all enjoy the games. We rejoice in the great plays and criticize the bad ones. That’s just what we do. And while we do, we’re buffered from the violence of the game. It’s one thing to watch on the highest quality TV’s and from the stands. It’s another to be on the sidelines as the game unfolds.

When the game is done, we discuss the results early in the week until we turn our collective heads towards the next contest. Meanwhile the players put in the work and attend to their battered bodies. The bruises take their toll. The scars both external and internal, last a lifetime.

This morning I read a piece on Bleacher Report featuring Jamal Lewis. Here’s a piece from the article that at least for me, served as a cruel reminder that when the athletes who make our Sundays in the Fall more enjoyable retire, the game’s collateral damage lingers:

When the NFL ejected [Jamal]—when one final undiagnosed concussion sent Lewis spiraling into the abyss—he considered killing himself.

He felt his self-worth disappear because, he says, the “cheerleaders” in his life—the 70,000 screaming fans each Sunday—disappeared. His trucking company collapsed. He filed for bankruptcy. His assets were seized. He felt a distance between himself and his family. He felt lost in the emptiness and couldn’t tell a soul about these demons. Didn’t know how to, really. Where he’s from, Atlanta’s hardscrabble Adamsville neighborhood, expressing feelings was a sign of weakness.

“You just kept it to yourself,” he says, “and you dealt with it. You let it out on the field.”

Without that outlet—without a linebacker to smash into—suicidal thoughts creeped into his mind and spread like a virus.

One by one, he saw three of his former offensive linemen die from health-related issues. Orlando Bobo to heart and liver failure. Orlando Brown to diabetic ketoacidosis. Damion Cook to a massive heart attack. Suicide seemed like a better way to go.

“You just have those thoughts about should you end it?” Lewis says. “I can only imagine with sleep apnea and heart attacks and heart disease. Who wants to go out like that? Especially when you have people upset with you—your wife upset with you, pissed off, you have to file bankruptcy, made bad decisions…” 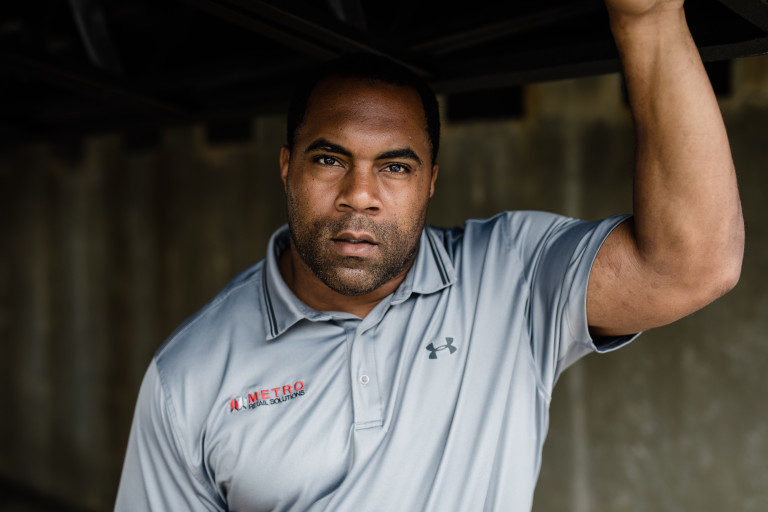 The struggles aren’t unique to Jamal but they do bring the issues of CTE closer to home given that they are now possibly affecting a member of the Ravens Ring of Honor.

Jamal does seem to take it all in stride, even admitting that if he had to do it all over again, he would because the game took him away from the dangers of gang and drug-related violence that infested the streets where he grew up outside of Atlanta.

One More From Hard Knocks

This scene from the Ravens Hard Knocks (worth the extra click thru to watch on YouTube, trust me) is arguably my favorite from the series. It will bring a smile to the face of any Ravens fan. Enjoy your day Baltimore. Stay cool. Stay hydrated. Get some restitution!