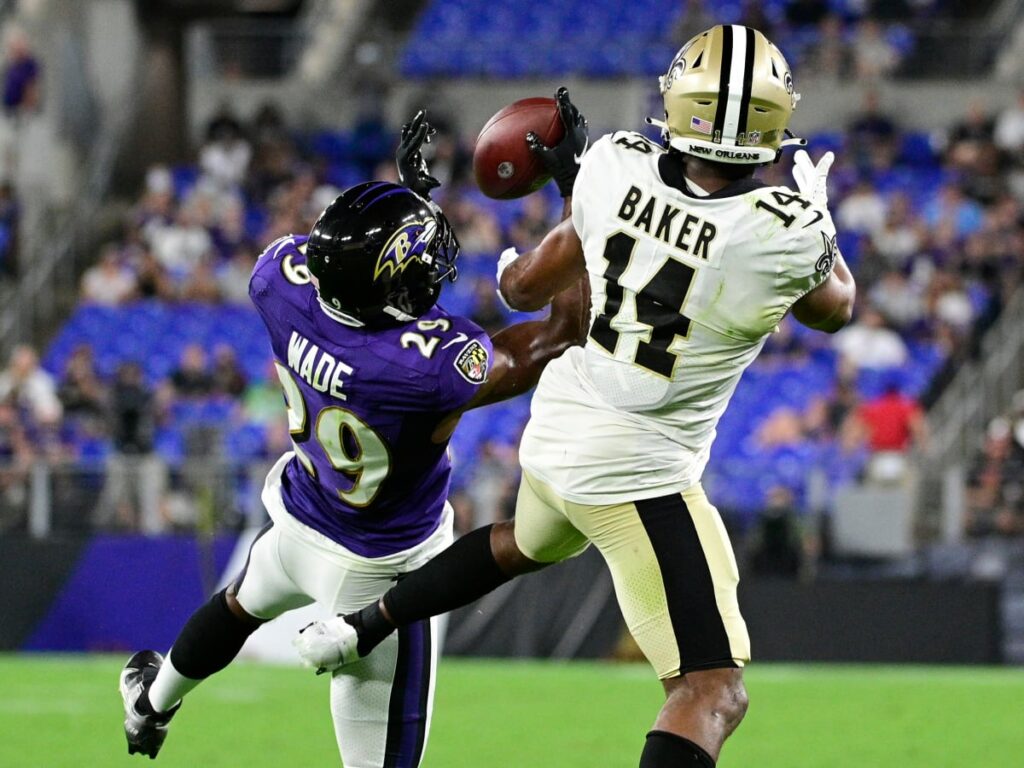 When the Ravens turned in the card for the 160th overall pick in the 2021 NFL Draft, most analysts believed that Eric DeCosta & Co. found a steal in the form of Ohio State University’s Shaun Wade.

Wade was one of college’s best corners in 2019 when he manned the slot for the Buckeyes. He was a consensus All-American and a first-team Big-10 defender. The 2020 chapter of his collegiate career was different. Wade was moved to the outside and as a perimeter defender he struggled against more accomplished wide receivers. Some blamed the struggles on nagging injuries and the learning curve associated with manning the boundary.

Consequently Wade’s draft stock fell, precipitously. Had he entered the draft in 2020, analysts have suggested that he would have been a Day 2 pick. And given his accomplishments in the slot in 2019 matched up against the Ravens need for depth at the position, particularly when considering a graduation plan from the oft-injured but highly talented Tavon Young, there appeared to be great value and upside for the Ravens with the pick.

But Wade struggled mightily during OTA’s and training camp. Even players who are destined for the practice squad at best – players like Jaylon Moore and Victor Binjimen, regularly had their way with Wade, often leaving him behind with distance to spare. The hopeful restoration of his production by moving him to the inside didn’t happen. His length (6’1”) is an asset but he lacks the change of direction skills, hip fluidity and sense of urgency needed to match up against shifty receivers that possess a measurable degree of suddenness.

It isn’t the Ravens style to give up on 5th round rookies. If NFL Parlay Picks placed odds on such a move, it would be an extreme long-shot. But as camp went on and Wade’s struggles continued, talk about the 22-year-old native of Jacksonville, FL centered mostly upon how the Ravens could strategically slide him to their practice squad for further development. That would have been a challenge. A player with Wade’s resume and size coming from OSU would unlikely sneak through waivers and the opportunity cost for keeping an underperforming player on the 53 would have been more costly than exploring a trade for Wade.

That @shaunwade24 interception sealed the win to keep the preseason streak alive. ????

At the end of day 3 of the 2021 NFL Draft, the Ravens had taken a shot on a falling prospect hoping that he could rekindle the magic in the slot from 2019. It didn’t work out. So DeCosta, instead of exposing Wade and getting zip in return, found a trading partner in the New England Patriots that allows the Ravens to recoup the draft capital invested in Wade over a 2 year installment plan.

NOTE: For Wade the Ravens acquire a 2022 7th-round from the Patriots and a 2023 5th-round pick. The 2022 pick is one the Patriots acquired from the Texans which slightly strengthens its value.

The trade will trigger some dead money against the team’s cap. In 2021 the Ravens will be charged $79,391 and in 2022 they’ll carry $238,173 in dead currency. To put that in perspective, the Ravens get a couple of picks in return for Wade and they don’t have to keep an underachieving player (while using his roster spot for a more productive one) and not have to carry Wade’s corresponding cap numbers of $660,000 and $825,000 respectively, in ’21 and ’22.

The move feels like a win for the Ravens.

Ultimately time will tell if it is, when we observe Wade’s career compared against the careers of the future Ravens who will arrive via the picks acquired from Bill Belichick.