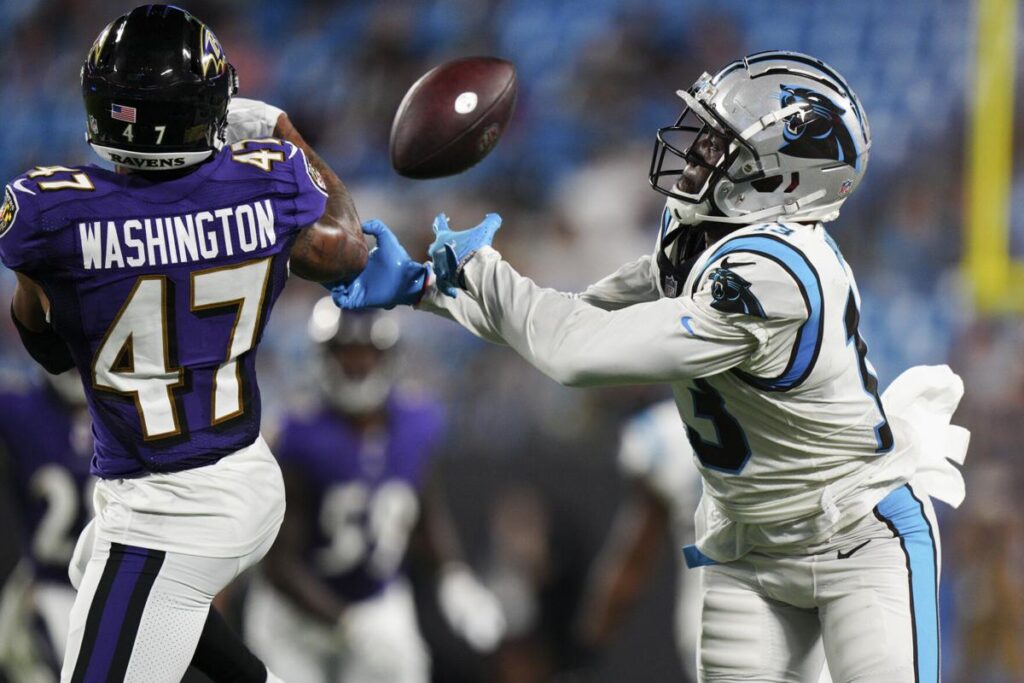 Tonight’s game down in Landover against the WFT marks the last audition for many players vying for limited available spots on the Ravens 53-man roster. A few of the positional battles are hotly contested – the competition is fierce and the victors have yet to be determined.

There’s always the possibility that some players who sit firmly on the bubble, could slide through waivers and land on the Ravens practice squad. Some could be claimed by other teams. Such is the journey of NFL hopefuls.

Teams must trim down to 53 by 4PM on Tuesday, August 31. But even if The Turk doesn’t come calling, spots at the bottom of a roster remain volatile. The juxtapositioning continues right up to the start of the regular season. Those who barely make the final cut remain vulnerable, particularly if other teams cut loose a player or two who the Ravens see as a fit.

Tonight I’ll be focused upon these positional battles:

Defensive Back: Chris Westry has had a very productive camp but he’ll have to fend off a few others who have had impressive summers such as Ar’Darius Washington, Nigel Warrior and Geno Stone.

Offensive Line: Who will win the starting nod at LG? Ben Powers seems to have the edge right now but the battle is tightly contested, if for no other reason than NO ONE has really stepped up to snatch the opportunity. Ben Bredeson, Patrick Mekari and Trystan Colon will determine this survival of the fittest.

Wide Receiver: Some believe that there is still a position to win here. Don’t be so sure. I think there are six players who will shape the WR room and at this point it would be a significant upset if those six don’t include: Marquise Brown, Sammy Watkins, Rashod Bateman, Devin Duvernay, James Proche and Tylan Wallace. Bateman could start the season on IR but that doesn’t necessarily mean that his roster spot will be replaced by another receiver until he comes off IR.

ILB: The Ravens are down to four inside linebackers. Three are givens: Patrick Queen, Malik Harrison and Chris Board. Will Kristian Welch stick? I peg his chances at about 25%, or less. The Ravens aren’t a traditional defense and it could be argued that their base is the nickel. Wink could employ one of his capable DB’s during game rotations to absorb snaps and still compete effectively. Starting the season with 3 ILB’s would not be a surprise.

The Power of Social Media

I’m sure you remember former Ravens DT Lional Dalton, aka “Jelly”. Recently while re-watching the Ravens Hard Knocks on HBO from 2001, the Ravens equipment manager teased Jelly for having the team’s biggest head, literally. The unflappable, easy going defender took it all in stride and he was a very serviceable and complementary piece of Marvin Lewis’ defenses from 1998 through 2001.

Recently Jelly took to social media to share his personal struggles – his acute need for a new kidney. Ravens fans rallied, spread the word of Jelly’s quest while keeping him in their prayer. Eventually it worked.

We often condemn social media platforms as a haven for hate speech and trolling – and it is those things far too often. But every now and then, when people come together to achieve a common goal, social media can shine and it did exactly that with Lional. Here he is from his hospital bed after his transplant surgery.

A special message from Lional to his @Twitter followers. Please continue to post messages for him. They 100% raise his spirits. He’s eternally grateful for all of you. @Ravens #RavensFlock @nfl #nfl @TDianeD @NFLPAFmrPlayers #billsmafia #ChiefsKingdom #SteelersNation #Broncos pic.twitter.com/oB1KLRtZHE

Continued prayers for Jelly. Here’s to his full recovery and his body’s complete acceptance of his new kidney. God bless!