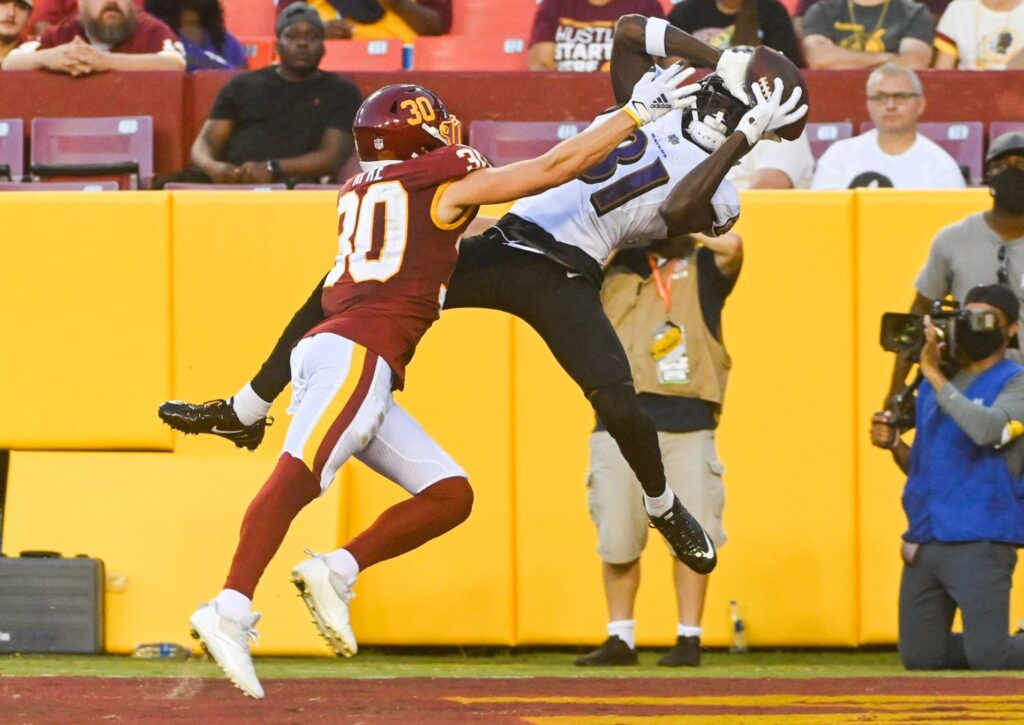 With the Ravens roster being cut down to 53 by tomorrow at 4PM Eastern, I thought it would a worthwhile exercise to make some final predictions for what we can expect in the next 24-48 hours.

Ah, who am I kidding? I’ll end up making some bold predictions along the way, simply because it wouldn’t be me without them.

The Ravens RB2 is on another roster.

This isn’t a knock on Ty’Son Williams, as I think he has some serious growth potential (much like Gus Edwards before him), but I think the Ravens will look for a veteran running back to take some of the load off of Gus Edwards, with Williams initial role as the third back of the group as he develops. I don’t think a free agent like Todd Gurley or Le’Veon Bell make the slightest bit of sense, but I do think the Ravens will watch for other teams to make cuts and find the third back in the group based on that crop, assumingly a guy willing to work on a 1-year deal to boost future stock and find a new home in 2022. Could that be a Latavius Murray or Devonta Freeman from New Orleans? What about Jaylen Samuels or Benny Snell in Pittsburgh (not sure they’ll keep Najee Harris, McFarlan, Snell and Samuels there)? By end of week I think we’ll have a clear answer.

[Related Article: Can The Ravens Overcome The Loss of JK Dobbins?]

McSorley has begun practicing again today, and while that’s great news for him? A stellar preseason show by Tyler Huntley has locked the second year Ute into that QB2 spot, and I simply don’t see the Ravens keeping three signal callers on the roster. With that said, I also don’t think McSorley has shown enough to warrant another team snatching him up to put on their active roster, and as such, it would make the most sense for both the Ravens and McSorley to sign on for the Baltimore Practice Squad.

Binjimen Victor won’t make the 53… until Bateman goes on the short-term IR.

I think Deon Cain would’ve taken this roster spot had he not missed so much time in camp, but I do believe that Victor has made the most of his opportunity with so many wideouts sidelined, and will have a little wink-nod agreement with the Ravens to resign after the team moves Rashod Bateman to the short-term IR. By far my favorite play from Victor in camp was a leaping catch so high than he could’ve cleared Ar’Darius Washington on his tippy-toes. Then of course, there was his stellar touchdown catch last week versus the WFT… kid has truly earned the spot.

Geno Stone doesn’t get the nod. Neither does CoCap.

I have DeShon Elliott, Chuck Clark, Brandon Stephens, Nigel Warrior, and Ar’Darius Washington making this roster… which leaves Geno Stone and Anthony Levine Sr on the outside looking in. To be honest, I’m having a harder time making a case for Levine than Stone. Stone has shown well in preseason games, has youth on his side, and if it wasn’t for Washington’s play? I’d have Stone filling that final safety spot. As for CoCap, it’s tough to see a veteran, long-time Raven leave in such an unceremonious fashion, but unfortunately, he’s a casualty not due to his fall off in play, as much as the abundance of talent at the position.

Geno Stone… gets the call back.

I said I had a difficult time making a case for Stone, and that’s why I think they bring him back once Jimmy Smith goes to the IR. Is this a CYA move by me to ensure that Stone making or missing the roster fits my narrative? Yes. I mean, no.

Half of the Baltimore Ben’s bounce.

Do some math: there are four Ben’s on the Ravens roster as of this moment- Bredeson, Cleveland, Powers and Mason- and I have two of them missing the final cut. For starters, I just don’t see how Ben Mason makes this team. By my novice guesstimates, the Ravens will roster Mark Andrews, Nick Boyle, and Josh Oliver. Boyle will then get moved to the short-term IR, and Eric Tomlinson gets the call back. The Ravens also have Pat Ricard as their fullback, and regardless of whether you view Mason as more of a fullback or tight end? I just don’t see allocating an extra roster spot super-depth needs in the name of shortchanging other needy positions.

As for the trio of Offensive Linemen by the name of Ben, I can see it going one of two ways: Bredeson gets cut, or Powers gets traded. I know, it’s silly to suggest Powers goes after starting plenty at the spot in the preseason… except I recall a lineman by the name of Jermaine Eluemunor starting at guard in the preseason for Baltimore, only to be traded before the season started. It’s not out of the realm of possibility, and Powers has plenty of trade value (call it a conditional 5th that can be a 4th if he starts the whole season or something). 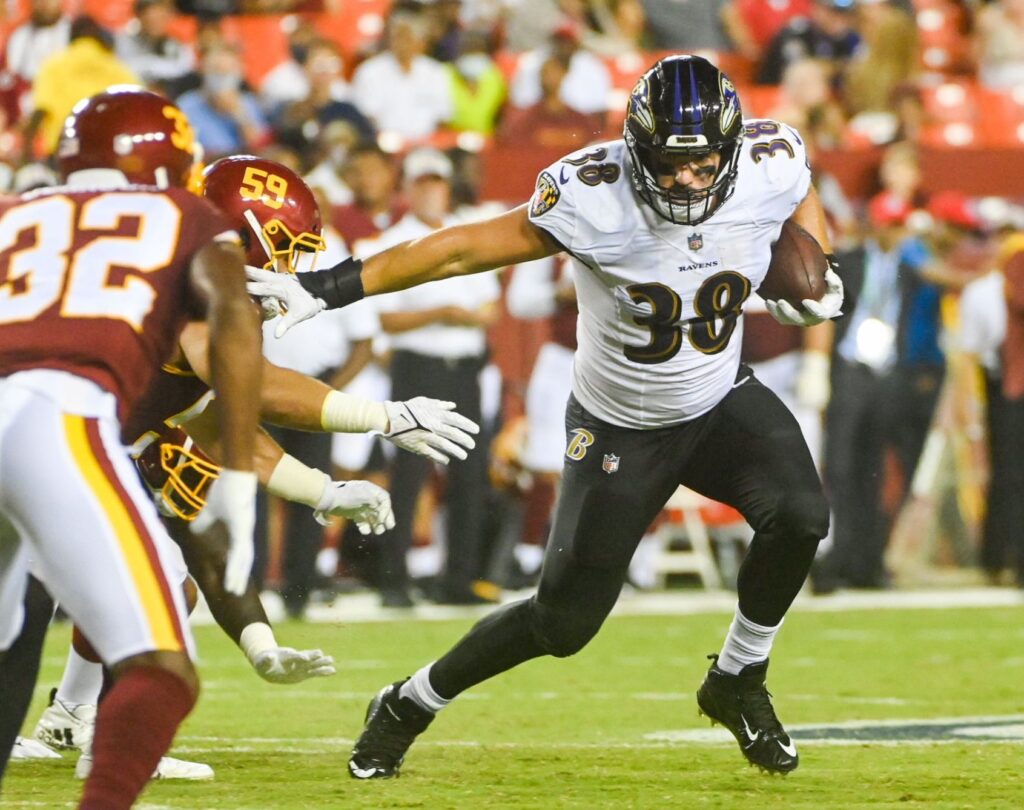 Kristian Welch does not make the final cut.

I know a lot of folks love the ‘next man up!’ mantra for the Ravens, but that doesn’t always mean the next man up is a serviceable option. In regards to Welch, who would take the roster spot of LJ Fort after he suffered a season-ending injury, I simply don’t see it. In camp, he was constantly beat like a drum in coverage, and always chasing from behind on run plays. I’m sure he’s a fine Special Teams player, but ultimately? I think the Ravens can find a veteran post-cut downs, with more experience and defensive talent, on the cheap.

The Ravens have two more trades in them.

Hear me out- Jake Verity is a very real trade option for the Ravens. Verity likely wouldn’t go for any more than a 6th at best (thanks Vedvik for ruining that), but even despite his 40 yard miss in the preseason finale, I think the kid has a bright future in this league, and any kicker-needy team would be foolish to let that slip by them. As for a second trade, I’m thinking more of a shocker move… could it be Ben Powers? Maybe the Ravens look to capitalize on Ferg’s bright preseason in lieu of a roster spot? Could one of the many stellar DBs be on the move? Ultimately, this is a ‘too much talent’ problem at certain positions, where the Ravens could look to a trade for a solution during the final roster crunch.