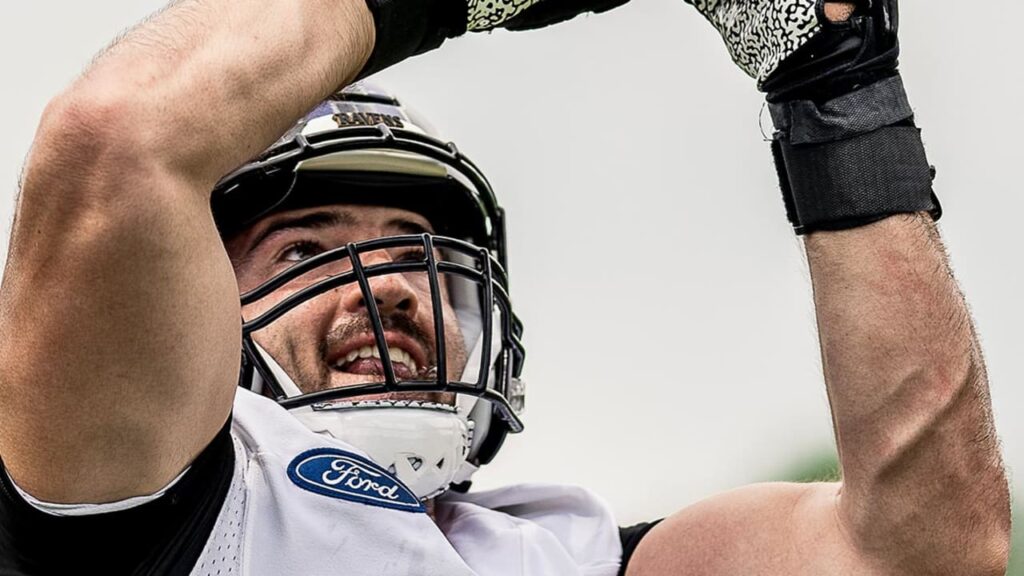 It’s been interesting to see how much attention the Ravens release of Ben Mason has attracted. The former Michigan player who spent his time as a Wolverine at fullback, defensive line and special teams, was the last pick of Round 5 in the 2021 NFL Draft – the No. 184th overall.

From the jump, Mason seemed like an odd pick. After all, the Ravens have FB Patrick Ricard under contract for another year and given the team’s needs at other positions such as edge and offensive line, it seemed more appropriate at the time for the Ravens to take a flyer on one of those positions, or even the interior defensive line where they’ve found Day 3 success in past drafts.

But the card was turned in for Mason, much to the delight of head coach John Harbaugh who spoke about the pick shortly after the Ravens made the selection for the Newtown, CT native.

“I can tell you that he’s Jack and Jackie Harbaugh’s favorite player. I told [executive vice president and general manager] Eric [DeCosta] and [executive vice president] Ozzie [Newsome] that as we were getting ready to make the pick. So, I think that had a big influence on Eric, for sure. (laughter) But he does fit us, our style [and] who we are. I think it’s pretty easy for anybody that’s watched us play, and now that you’ve seen some clips on him, to understand how he’s going to fit into our offense. He’s just a perfect fit for what we’re trying to do in going forward and building what we’re building here on offense. I love his personality. I love who he is as a person. I love the way he plays. Jack Harbaugh likes him. Especially if Mama Harbaugh likes him, Jackie, then we like him.” (laughter) ~ John Harbaugh, May 1, 2021

The Michigan influence in the Ravens war room is obvious and it’s fair to wonder if the Brothers Harbaugh have mildly steered a few draft day decisions. Since 2016 the Ravens have selected four players from Ann Arbor including Mason, Ben Bredeson, Chris Wormley and Willie Henry. The four picks combined have played in a total of 66 games, the equivalent of one season per player.

Mason may have been an insurance policy for Ricard who was recovering from offseason hip surgery. Perhaps the injury was more serious than the Ravens led on. That would surprise no one. Perhaps the Ravens selected Mason knowing that the New England native who had attracted the attention of Bill Belichick, would not sign as an undrafted free agent in Baltimore given the overtures from the Patriots and the presence of Ricard. Perhaps the Ravens believed that Mason would be a nice transition piece and a less expensive one at that, since Ricard is now in the final year of his contract that will pay him $2M in 2021. Maybe it was all of the above. 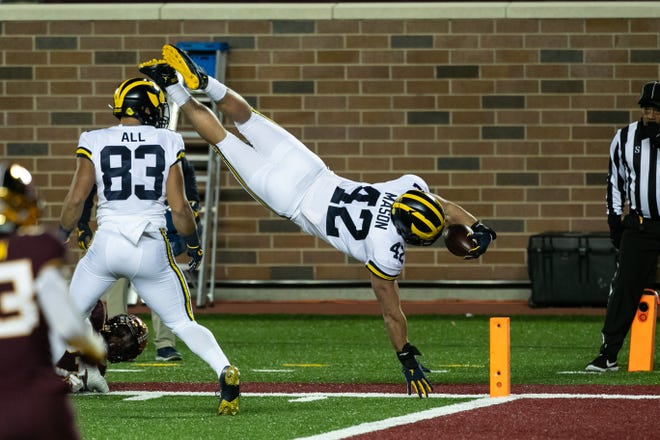 But Ricard is clearly on the mend and will be ready when the Ravens take on the Raiders in Las Vegas on September 13. So given that Mason’s position is a dying breed; given the Ravens exemplary history of employing some of the league’s best fullbacks who have attained Pro Bowl status in the NFL; and given the clear succession plan, the Ravens thought that Mason would rejoin the team as a member of their practice squad. It seemed like a reasonable plan if in fact that was the thought process. Unfortunately the plan unraveled when Mason’s hometown team came calling. And clearly the decision ruffled Harbaugh’s feathers.

As the Ravens began to add players to their practice squad on Wednesday, Harbaugh was asked if Ben Mason was in the team’s plans.

“I’m not going to comment on those things. I’m sure he can announce his own plans himself.” ~ John Harbaugh, September 1, 2021

The #Patriots are signing fullback Ben Mason, source said, as the former #Ravens fifth rounder lands on the NE practice squad with a quick elevation likely.

Harbaugh was understandably chippy, particularly on the heels of the praise he heaped upon Mason following the draft.

At the end of the day, Mason wasn’t going to determine the success of the Ravens in 2021. He could have been a contributor for a few years until he played out his rookie contract and the next FB came along. And history suggests, one that includes past FB’s such as Sam Gash, Lorenzo Neal, Vonta Leach, Le’Ron McClain and Kyle Juszczyk, that they’ll find another capable player for the job if and when Ricard moves on.

Kick For a Pick

Most thought that Eric DeCosta would pull of a little more magic by swapping promising young kicker Jake Verity for coveted draft capital just as he did with K Kaare Vedvik in the past. So far it hasn’t worked out that way. Verity’s missed 40-yard FGA during the preseason finale in Washington and the blocked PAT didn’t help DeCosta’s quest.

Eventually the Ravens cut Verity and surprisingly, he wasn’t claimed. The Ravens subsequently signed Verity to their practice squad – a curious move that undoubtedly bears watching.

It isn’t fair to judge a draft class until the collection of talent has 3 seasons under their individual belts. That said unless a couple players from the Ravens 2019 class step up their game in 2021, the group would be assigned a C grade – at best.

Jaylon Ferguson is showing signs of coming on a bit and the coaching staff has echoed his praises. So he’ll be a player to watch this season. Another is Miles Boykin.

We hear repeatedly how Boykin is a special teams contributor and that he’s a capable and willing blocker in the Ravens run game. That said, forgive me if I don’t find his two special team tackles in 2020 to be all that impressive and as for his blocking acumen, how will that skill be employed when he’s riding the pine when he comes off Injured Reserve? At least five other players (Sammy Watkins, Marquise Brown, Rashod Bateman, Devin Duvernay and James Proche) are just flat out better pass catchers and rookie Tylan Wallace will soon be ahead of Boykin on the depth chart as well.

The former Golden Domer is a long strider and slow off the line of scrimmage. He doesn’t challenge cornerbacks with his route running or change of direction skills. He’s vanilla and an easy cover. Plus he doesn’t possess very good football instincts – not even on par with those of practice squad receiver Binjimen Victor.

Given this less than impressive 2019 draft class, removing a third-round pick from the list makes the class even more unimpressive. At some point you have to admit your mistakes and Eric DeCosta has done that with Shaun Wade and Ben Bredeson. To his credit, he’s acquired some draft capital for those mistakes.

As for Boykin, I’m sure DeCosta has tried to obtain some value for him, but found no takers. And that’s no surprise. The man has played in 32 games, 24 of them starts, and has been targeted just 55 times. Let that sink in. And he hasn’t been part of the posse of receivers who gather with Lamar Jackson in the offseason to develop chemistry – to nurture a rapport.

The truth be told, if Boykin was a 5th round pick like Wade and Mason, he’d be a former Raven.

I got together with an old friend recently and we reminisced about old times and how during our formative years we were blessed to have the best organization in Major League Baseball right here in our hometown. The Baltimore Orioles were a dynasty before the media began to loosely apply the label to teams from all sports.

During the conversation our thoughts turned towards Earl Weaver and I shared a story with my friend, one that he hadn’t heard before.

One day before a game, Weaver noticed outfielder Pat Kelly sitting in the dugout reading. Now keep in mind that Kelly was a man of devout faith, so much so that his nickname was “The Reverend”. Weaver could see that Kelly had a Bible in his hand. The conversation went something like this:

Weaver: “Pat, what are you doing?”

Weaver thought for a moment and then said, “Well, I’d rather you walk with the bases loaded.”