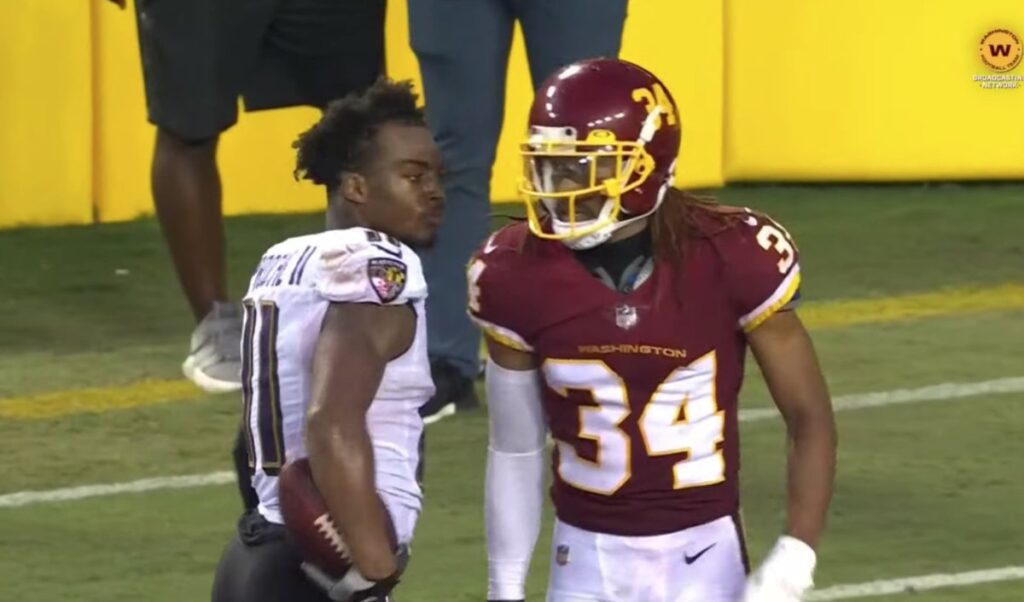 Over the course of the last few seasons the NFL has encouraged touchdown celebrations and even the jubilant festivities following an interception or fumble recovery. They’ve even installed cameras in end zones to further encourage the very public displays of emotion.

The behaviors are consistent with those of Madden NFL, a game that nearly all young NFL players grew up playing. Like it or not the exploits are now so commonplace that they’ve become acceptable etiquette in the modern world. That’s just the way it is.

But recently Roger Goodell and his merry band of cranky old guys decided to put the league’s officials on hyper-alert to fine players for taunting. The NFL zebras are apparently pretty twitchy with anything that appears like taunting and unfortunately Ravens WR James Proche fell victim to the wrath of Roger.

If you haven’t seen the play, here’s a look at what took place on the field on Saturday night, August 28, 2021 at FedEx Field in Landover, Maryland.

So according to Roger Goodell, this is worthy of a $4,567 fine? pic.twitter.com/P1HtkzzihH

Look, the same emotions that ignite taunting are born from the same DNA chromosomes as celebrations. So Roger is going to ding the paychecks of players league wide who cross their arms in front of an opponent, but it’s ok for an entire defense to run the length of the field to strike the pose in front of cameras that the league has signed off on to encourage all sorts of creative celebrations?

I get that if a player is injured after being hit ferociously and the defender stands above him, looking down and talking trash, that a flag and possibly a fine are warranted. But what Proche did – c’mon man!

So to help offset this ridiculous fine for taunting, we’ve decided to set up a Go Fund Me page for Proche – yet another way for Ravens fans to rally around the team and to send a message to the league that they’ve gone overboard, once again.

Remember when the NFL implemented the head-to-head penalties and fines and how the overzealous game officials policed it so closely that it took away from the viewing pleasure of fans. This taunting BS is going to do the same. But together we can make a statement.