The Ravens and tight end (and birthday boy) Mark Andrews agreed on a new four-year extension this afternoon.

Sources: The #Ravens and Pro Bowl TE Mark Andrews have agreed to terms on a substantial extension, with Andrews getting a 4-year deal worth $56M. The $14M APY means he’ll make more money through 4 years than any other TE in the league. ? ? ?

RSR staff give their thoughts on the move here…

Happy Birthday, Mark Andrews! The Ravens locked up a cornerstone piece of this version of the team for the next several years, and Andrews becomes the third-highest paid tight end in the league. That feels right as a guy who is clearly top five in the NFL, only 26 years old and a solid citizen all around. This is a good piece of news during an off-season that has not seen enough of that this summer, particularly on the offense.

Mark Andrews is a cornerstone player for the Ravens. This is great news that it’s getting done now. His annual average salary comes in just below George Kittle and Travis Kelce. Waiting until he would’ve become a free agent next season could have possibly put him out of the Ravens’ price range.

Recently listening to Andrews on the Ravens Lounge podcast he was effusive in his praise for Lamar and his desire to stay with the Ravens. This contract was earned and I believe he might become even more productive than he has been  so far. Great job by Eric DeCosta signing a home grown talent early.

I thought Andrews would push for Kittle money or right under so this is fair market value to Cole’s point. Only thing is with this move, the team has kind of signaled how they want to handle their investments going forward. Less chance some of the defensive guys stay. #Ravens https://t.co/WePrS1qGwc

Lamar Jackson has his security blanket in place for the foreseeable future. The biggest takeaway from this monster deal is that Eric Decosta knows the importance of this team’s chemistry, a chemistry that’s been built since the 2018 draft class first wore purple.

The Ravens spent decades building their identity with long-term cornerstone players on defense, but now a new identity is being forged. Somewhat similar to the past in terms of a run-heavy, play action approach, but different in terms of the athleticism, speed, and explosiveness that’s made this offense the talk of the league (as polarizing as those discussions may be). Once the Ravens get Jackson’s deal done, they’ll have the most important mainstays in place to ensure that identity continues to grow.

Love this deal for both parties.

Andrews was always going to get top dollar. He earned his money.

The #Ravens keep a player who is invaluable to their offense.

Andrews is likely to remain Lamar Jackson's most valuable target for the duration of this contract. 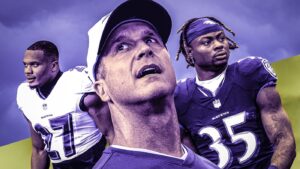