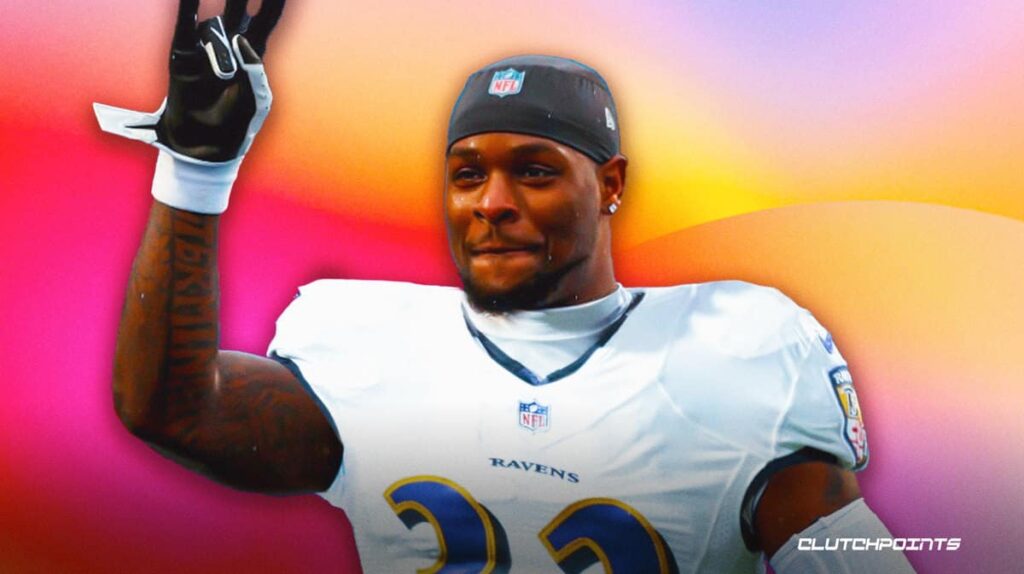 For the first time since Lamar Jackson took over the starting QB job in Baltimore, questions are being raised about the Ravens’ running game after both J.K. Dobbins and Justice Hill were ruled out for the season.

While it’s far too early to be ringing alarm bells, it’s not easy to withstand season-ending injuries to two running backs, especially Dobbins, but the Ravens appear to be in good shape after the preseason breakout of Ty’Son Williams and yesterday’s signing of Le’Veon Bell.

Let’s (halfback) dive into what Dobbins and Hill brought to the table, and how Williams and Bell can work to fill those gaps.

Breakaway Speed on the Outside

In this first clip, Dobbins beats everyone around the corner for a solid gain. Obviously, the threat of Jackson keeping the ball helps him, but that’s the magic of the Ravens’ offense. Their running backs don’t have to be the fastest in the NFL, they just need enough burst and acceleration to take advantage of space on the outside.

Dobbins does the same thing on this play; the poor Cincinnati edge defender has no chance to catch up to him. Note that Dobbins doesn’t do anything exceptional on this play; he just takes a good angle and simply beats everyone to the sideline. Jackson earns the bulk of the defense’s attention, and rightfully so. He’s probably the fastest player on any field he steps on. But that means the Ravens’ running backs just need to explode to the outside, where they’ll find defensive backs that are ill-equipped to tackle them.

J.K. Dobbins had just one rushing attempt today. One. That’s simply not enough.

He did the most with his one shot — running through tackles and gaining 34 yards pic.twitter.com/R0jcqHW0fO

Hill occasionally offered this change-of-pace as well. This preseason clip sees him evade an initial tackler and then outrace the Packers defense to the edge for a solid gain.

Dobbins doesn’t take this play to the outside, but it once again shows off his breakaway speed to turn a solid gain into a touchdown. Bell’s vision and patience may help him turn these inside runs into chunk plays down the sideline, but it’s unclear if he still has that top gear to outrun defensive backs. Williams reportedly put up a 4.48-second 40 yard dash at his 2020 Pro Day, so he still possesses the breakaway speed to gain extra yardage on average plays.

This is a sneaky play from Williams, where his acceleration and quickness in changing directions is more important than his straight line speed. He’s still able to turn the corner despite reversing field, lowering his shoulder and leveling a defender for extra ‘oomph’ at the end of the play.

Ty’Son doing his thing. Changing direction and finishing runs. Drops his shoulder and makes sure he DB feels him. I’ve heard that called sideline violence. pic.twitter.com/rcww12cG5W

This is a prime example of Bell’s preternatural vision allowing a play to develop into a larger gain than you’d originally expect. He actually gives up an inside hole in favor of more room on the edge, where he can make defenders miss with his shiftiness in the open field. He’s also exceptional at setting up overcommitted defenders then blowing by them with a jump cut back to the inside.

Long story short? Don’t expect as many homeruns from Williams and Bell as you would Dobbins, but that doesn’t mean they can’t consistently get solid yardage on those outside runs.

I think Devin Duvernay could be a real X-factor for the Ravens this season. He’s a physical runner with blazing speed (4.40-second 40 yard dash) who can lower the boom on overmatched defensive backs.

Short-in motion to split ==> beneath route manufactured touch in space on a conservative play action.

Easy way to get a playmaker the ball in space!

Would love to see Duvernay’s usage offset the loss of Dobbins on manufactured touches like this ???? pic.twitter.com/NBLSRsj0ks

If the Ravens can work to scheme him into open space a-la Kyle Shanahan, even with some looks out of the backfield, he could be a dangerous weapon for Greg Roman this year. He gained a ton of yards after the catch at Texas, especially on screens, so the Ravens should use him to attack the outside more frequently than last year.

One of the big reasons that Dobbins was predicted to have a breakout season was his improvements as a receiving threat out of the backfield. He spoke about how he modeled his game after the NFL’s best dual-threat running backs, like Christian McCaffrey and Alvin Kamara. https://youtu.be/I28JfuXZnYs

While Dobbins wasn’t a huge factor in the Ravens’ passing game last season, he clearly improved his hands during the offseason, making a number of highlight catches in training camp.

Bell is a proven receiving back who knows how to translate his ball-carrying elusiveness into route-running. He can line up in the slot or out wide to provide extra versatility to a Ravens’ passing game that could use it.

The Ravens needed a bit more pass catching in their backfield?

They now have it with Le’Veon Bell pic.twitter.com/vMT1utebE4

He’s also got a reliable pair of hands, so he can be more than just a check down outlet for Jackson. As a receiving threat, Bell will force opposing defenses into even tougher decisions. He’ll outrun linebackers in coverage, but too much nickel and dime against the Ravens plays right into their power running game.

His first touchdown of the season comes on a shoestring catch.

Hill, on the other hand, showed up more often in pass protection, consistently picking up blitzers headed straight for Jackson. This is where a young and hungry Ty’Son Williams has excelled in the preseason.

Justice Hill with a good rep in pass pro on 3rd down. Scans inside first, starts to work that way but recognizes Skura & Mekari are in position to pass off the twist. Snaps his eyes back outside and picks up Justin Houston. pic.twitter.com/kf0IG2jrGN

Huntley probably doesn’t escape pressure on this play if Williams doesn’t throw himself into a blitzer, setting up a TD in the process. And this isn’t the only time either. Reports out of the Ravens’ joint practice with the Panthers suggest that Williams’ power and strength show up in pass protection just as much as it does when he gets handoffs.

Need more evidence of Williams’ ability and willingness to block? In these two clips, Williams blocks through the whistle like only a true Raven could. Does it matter that he didn’t get the ball? No! He’s going to do whatever he can to clear a path for his teammates to the end zone.

Ty’Son Williams blocking his tail off as usual.

Ty’Son Williams always blocking his tail off downfield! That’s how you EARN reps and touches!

Looks like a mesh with Huntley stepping up and delivering the easy read. pic.twitter.com/fAa9CrAxPB

Don’t sleep on Bell’s pass-protection ability either. His top-tier vision helps him see blitzers faster than most running backs, and he’s been willing to put his body on the line throughout his career. Hopefully, he’ll protect Jackson with the same toughness and grit.

Le’Veon Bell was so good in pass protection Thursday. Big impact on the game even if the Steelers aren’t running the ball. #Steelers pic.twitter.com/b913wSCzQ2

There’s no way to sugarcoat it: it sucks to lose J.K. Dobbins for the season. Hill, too, as the team will need to replace his solid pass-protection and special teams play. But Eric DeCosta has once again done a masterful job in identifying and filling needs on the Ravens. Williams has the speed to bounce to the outside, and Bell’s patience and vision allow him to find holes that other backs wouldn’t ever see.

I was really excited to see Dobbins running routes and catching passes out of the backfield. While Williams may not have the refinement to consistently contribute to the passing game, Bell certainly does. Bell’s receiving experience will make him a viable threat out of the backfield this season. Both Bell and Williams have enough pass-protection chops to make up for the loss of Hill, though I must add on a personal note that I can’t wait to see Williams blow up blitzers in the regular season with the same energy and vigor as he did in the preseason.