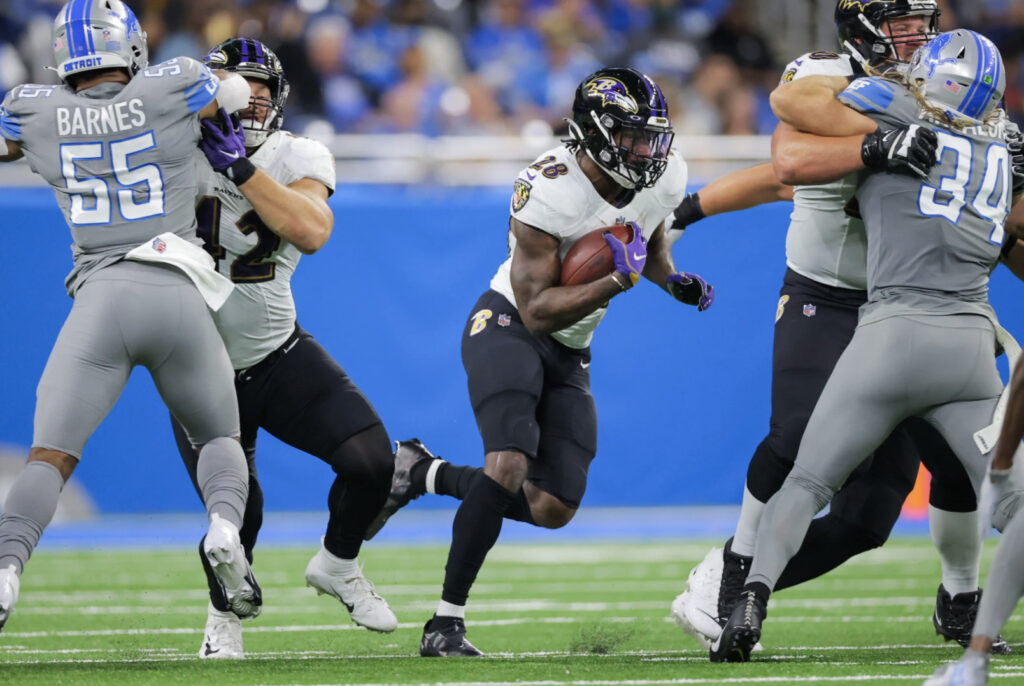 When I put players under the ‘Stock Up’ or ‘Stock Down’ categories, I try to make it players whose play that week impacts the outlook of the rest of their season — negatively or positively — the most rather than simply who had a good or bad game, because anyone can do that. Did an offensive lineman play well in his first game at a new position, and now the team has a new starter moving forward? Stock Up. Did a linebacker who struggled with tackling last season continue to do so, thus raising concern on his future? Stock Down.

Over Mark Andrews’ last five games dating back to Week 17 of last season, he averaged 34.6 yards per game with no touchdowns over that span. He’d been awfully quiet for a guy who signed a contract that made him the third highest paid tight end.

On Sunday, we saw less of that Mark Andrews and more of vintage Mark Andrews. Lamar Jackson found him open early and often, finishing with five catches for 109 yards. That’s his most yards in a game since Week 2 of 2019, over two calendar years ago.

With his five catches for 109 yards, Mark Andrews (169 career receptions) surpassed Todd Heap (168) for the most by a TE in his first four seasons in Ravens franchise history.

I’ve also been really impressed with Andrews’ blocking. He’s been solid in sealing off the edge to set up outside runs, most notably on Jackson’s second touchdown run against the Chiefs last week. With Nick Boyle, maybe the NFL’s best blocking tight end, yet to play this season, Andrews has stepped up big time in that area.

He did turn the wrong way on what could have been a touchdown catch, and a ticky-tack holding call brought back a Jackson touchdown run, but this was an encouraging game from Andrews. The Ravens will need more of what he showed Sunday moving forward.

Chuck Clark was all over the field Sunday afternoon. He finished with a sack and 12 total tackles, the second highest mark of his career behind only Week 11 of 2020 (13). His sack on Detroit’s second offensive drive came on a big third down to force a three and out. For a defense that’s dealt with injury after injury all over, Clark has made up for it by being constantly around the ball and making plays.

Has Marquise Brown been good, like really really good, over the first two weeks this season? Yes. Did Brown drop three passes, two of which would have been sure touchdowns, on Sunday to bring back memories from early season 2020? Also yes.

It’s a weird step back from Brown, who was looking like a legit WR1 through two games. Unfortunately the dropsies found him again like COVID found some other Ravens again. I’m not too worried about this game for Brown moving forward. Every pass catcher has games like this, and Brown is still on pace for over 1,000 yards receiving this year. He needs to ensure this is a one-time thing.

The Ravens didn’t get much from any of their backs in terms of production, but all three of Ty’Son Williams, Latavius Murray and Devonta Freeman are on this list for various reasons.

Williams’ stock isn’t down from performance, but lack of opportunity. He came into Week 3 third in the NFL in yards per carry among runners with at least 20 attempts. His burst was helping to make up for the losses from other backs, and he even began showing some promise in the passing game. For him to get only five touches in this game is extremely puzzling. Granted, he did fumble in both games this season coming into Sunday. Maybe he’s in John Harbaugh’s doghouse, but at some point what seems like your best running back has to get more work. It’ll be disappointing if this is a preview of what’s to come.

For Murray and Freeman, who had plenty of opportunity, the lack of production makes you question why they got so much of it. The two combined for 10 carries for 31 yards with Murray edging Williams out in total touches seven to five. Similar to Week 1, Murray showed very little juice or power as a runner. Freeman finished with three runs, all of which were option runs that went for very little gains. You don’t think the Lions knew what was coming?

lions defended this perfectly. okwara hugs the line tight and prevents bozeman from getting into space and closing QB run lane forcing lamar to hand off, leaving the linebacker a free pass to freeman and all he has to do is make the tackle pic.twitter.com/PKE4lNN6Jg

It was a weird and unexplainable divide of running back touches Sunday, and one that leaves us with not much optimism in the two veterans. Preseason standout Nate McCrary — who was waived before the season, claimed by the Broncos, released by the Broncos and signed to the Ravens’ practice squad last week — is back in the fold. I’d love to see him get a look with an up-and-down three games from Murray and next to nothing from Freeman.