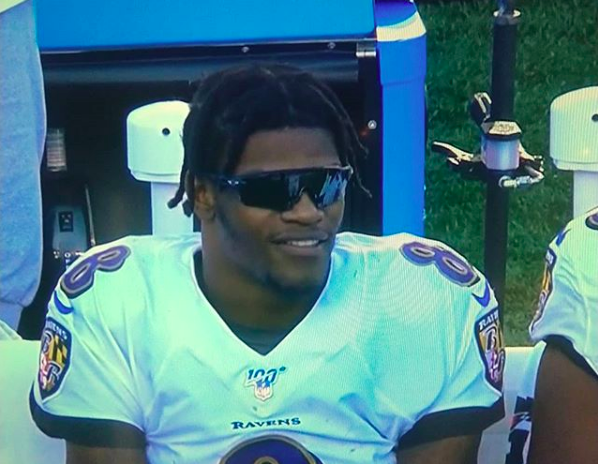 It’s now Wednesday and I don’t know about you, but I am still major hyped from that Monday Night Football victory over the Indianapolis Colts a.k.a. the traitors. The Baltimore Ravens played an outstanding second half that saw Baltimore overcome a 19-point deficit and win in a game that many had declared over just after halftime.

Instead, the Ravens took it all personally and won the whole dang game. It was unreal.

I won’t waste your time recapping the game, though. Instead, I’m here to give you the best reactions from the Twitter-verse about our favorite football team. After all, that’s what makes us all happy, right?

There has been a lot to talk about lately regarding the Ravens, so let’s not waste any more time.

Before we go to Twitter, however, let’s touch on Mark Andrews’ story headed into this game.

It turns out that Andrews’s grandmother had passed away recently. Andrews, with a heavy heart, decided to play Monday night anyway and to dedicate his game to his grandma, who he stated was “the biggest Ravens fan ever”

“My grandma passed this week and I wanted to play for her,” Andrews said. “I was sad I wasn’t able to be there for her, but she means a lot to me. Growing up, she lived like a block away. I’d ride to her house, and all of our family is praying for her. I was glad I was able to play for her. She’s the biggest Ravens fan ever. She looked up every article y’all have ever written. I know she’s looking down on me watching, and I’m extremely blessed to have had her in my life.”

I absolutely believe the part about reading about her grandson’s team, and it should mean the world to not only Mark but to all of us that she had the heart, dedication, and love to give us all the time of day.

Above all else, we send our condolences to Andrews and his family…

How confident was Lamar Jackson headed into overtime? You tell me…

Appears like Lamar Jackson said “it’s over” when the Ravens won the OT coin toss pic.twitter.com/IRs8uu0Xxa

It appears that our MVP quarterback says, “it’s over,” after the Ravens won the coin toss. Baltimore proceeded to drive right down the field with ease and score a walk-off touchdown – Jackson to Marquise Brown.

Speaking of Brown, does anyone remember former Ravens coach David Culley’s comments about Hollywood? In case you forgot, this nice Twitter account reminded us:

Has Hollywood caught enough touchdowns yet, Culley? He has 11 in his last 11 regular season games. He’s also on pace for over 1,500 receiving yards. Brown is one of the best receivers in football right now and Culley’s comments look worse with each passing week.

It feels like every week Jackson is doing something remarkable in the history books, not just for the Ravens franchise but also the league as a whole. This past week, Jackson made more Ravens history:

Not bad for a ru-… I mean, someone who allegedly can’t throw.

Former NFL receiver Andrew Hawkins’s jaw hit the floor when he found this bit of information out:

Lamar Jackson is 5th in NFL in passing and 8th in the NFL in rushing 🤯.
.

Can’t say we blame him… those certainly are some unbelievable numbers. In fact, to be more specific…

Lamar Jackson is currently on pace to finish the 2021 season with 5,165 passing yards

In addition to over 5,000 passing yards, Jackson is on pace for ~1,159 rushing yards, as well. If that doesn’t win you MVP, then I have no idea what would.

We honestly cannot talk enough about how historically dominant Jackson was on Monday night:

On Monday night vs. the Colts, Ravens’ QB Lamar Jackson overcame the largest deficit of his NFL career (19 points) and set the NFL record for completion percentage (86%) in both a 400-yard passing game and a 40-attempt passing game. pic.twitter.com/E5ju49kUWH

Records… that is all.

Alright, that’s a lot of offensive talk… let’s give the defense some love, shall we?

Odafe Oweh has been a one-man wrecking crew this year. The best part? He was supposed to be a project. Turns out he’s way ahead of the curve. Oweh is playing like the Defensive Rookie of the Year right now. Not bad for a guy who had zero sacks his last year in college, right?

Finally, I want to end with this…

Whatever negatives you have to say about Lamar Jackson are quickly becoming irrelevant. Jackson CAN throw the football extremely well AND win games with his arm. Jackson has now proven that he can play from behind on the scoreboard. Jackson has shown that the Baltimore Ravens are never ever out of a game no matter the score.

Simply put, the Baltimore Ravens are in excellent hands with this 24-year-old MVP quarterback. Lamar Jackson is the truth, and anyone who disagrees is just flat out wrong. If you hate Jackson, then I have serious questions about your sanity. Jackson is just amazing as a player and an individual.