Inside Access Relies on Deceit to Fit Their Agenda

Yesterday afternoon I made the mistake of listening to 105.7 The Fan during the slot that the station proudly calls, Inside Access. Listening to these guys is akin to driving past a car wreck that closes one lane of the highway and slows to a crawl. Or maybe there’s an unusually large specimen of road kill up against the jersey wall. You just can’t help the urge to look, and in the case of Inside Access, I couldn’t help but to tune in and listen. I just knew they would say or do something stupid. I call it rubbernecking radio.

And Messrs. LaCanfora and Weinman did not disappoint. They seldom do.

So I dial into The Fan sometime around 2:40 PM.

I hoped to hear something along the lines of how the Ravens have successfully navigated a season with an inordinately high number of injuries to key players. Against all odds and despite extreme adversity the team still sits at (6-2) and they are currently the No. 2 seed in the AFC.

Before the season began, I predicted that the Ravens would be (6-2) at this point in the season. But that was before I knew they’d have their entire depth chart of running backs wiped out. It was before I knew that they’d be without their All Pro left tackle after having their hand forced to trade their 2-time Pro Bowl right tackle; before losing their Pro Bowl, playmaking corner; before learning that their blocking tight end, vital to the league’s top rushing attack, would not play a down through 8 games; before a big contributor across the interior defensive line would not step on the field even once due to a lingering back issue; before quality reserves were no longer available, forcing the coaching staff and personnel folks into a regular juggling act. And let’s not forget the unexpected weight that these injuries place upon the team’s cap which further inhibits their ability to afford the best available replacements.

That’s a mountain of adversity to overcome and there’s not a chance that even the most optimistic observer would put the Ravens at (6-2) right now. Yet here we are. And while the story is not fully written, barring additional significant injuries, God forbid, they have as good a chance as any team to win the AFC North and possibly advance well into the postseason.

Credit for the success to date has to at least in part be attributed to the culture the Ravens have carefully created. John Harbaugh deserves a ton of praise. He’s the man who stirs the drink of the team’s inviting culture, one that attracts players because of the way they and their families are treated and respected. Harbaugh enjoys a tremendous relationship with his assistant coaches and with GM Eric DeCosta as well. The savvy DeCosta is talented, tenacious and an outside-the-box thinker who challenges the organization to be its best all the while supported by another Hall of Fame executive in the form of Ozzie Newsome, who is essentially DeCosta’s consigliere. And of course enabling all of this is owner Steve Bisciotti.

Bisciotti made his fortune in the employment business. He possesses a knack for placing and developing the right talent in the right spot paving the way to optimal efficiency. Think about this – Bisciotti is a self-made billionaire. Let that sink in for a moment. And how did he become a self-made billionaire? By understanding people and their core competencies and putting them in positions to succeed – to ignite their innate skill sets for the betterment of the organization, the team.

So yesterday, instead of hearing these Inside Accessors give credit where it’s due – instead of expressing delight in the way the Ravens got to (6-2), essentially turning a potentially chicken sh*t season into chicken salad (at least for the time being), what do they do? They attempt to discredit, even smear the reputation of the Ravens owner by twisting his public silence into something negative.

To try and fan the flames of a controversy that apparently exists only in the minds of LaCanfora, Weinman and a few of their impressionable listeners, the pair decided to post a poll on Twitter. It looked like this: 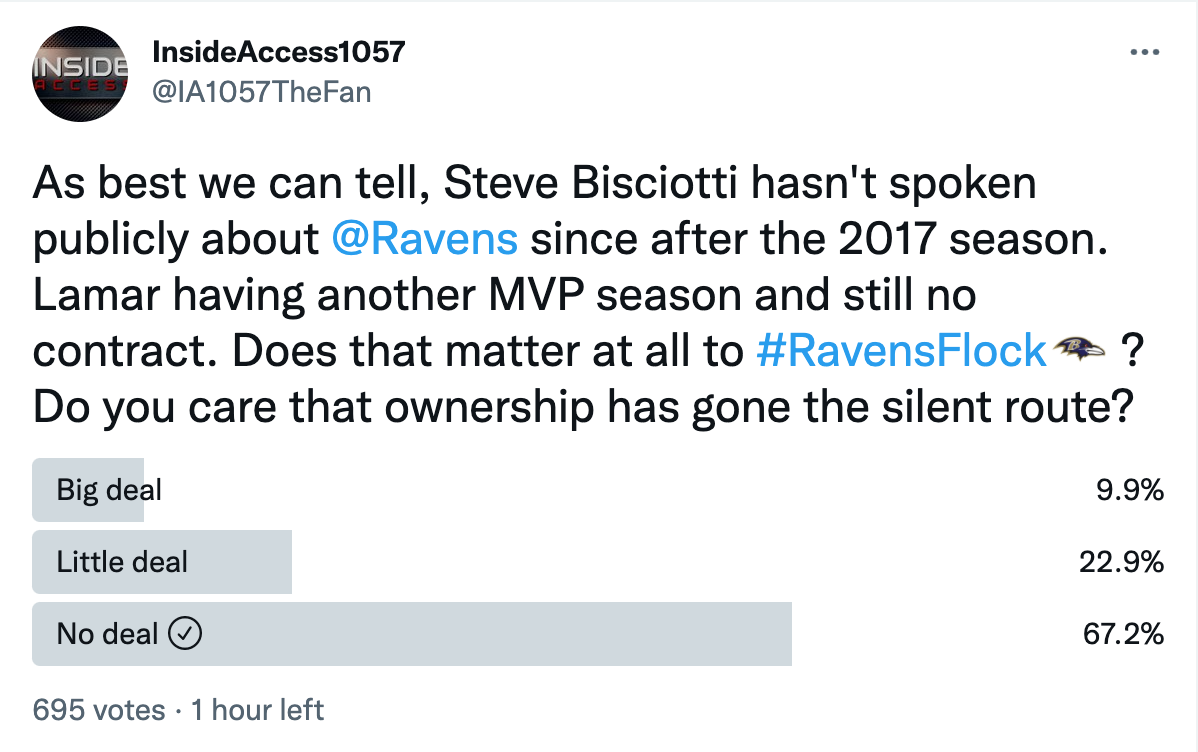 Slightly over 90% of their listeners think that Bisciotti’s silence is pretty much a non-issue. The 9.9% that agree with the two condescending talking heads were more than likely influenced by the inclusion of Lamar not having a new contract. They tried to stack the deck to exact their desired response and it failed like a LaCanfora inside scoop.

You know like that time he claimed that Ravens LB Zach Orr was signing a long-term deal with the team when in fact the presser was to announce Zach’s retirement. Or what about the time mid-way through the 2018 season when he reported, as if it was a foregone conclusion, that there would be a mutually parting of ways between John Harbaugh and the Ravens by the end of the season? How LaCanfora is CBS’ insider is mind-blowing. In other words, the NFL on CBS never breaks a story. We all just wait on Adam Schefter or Ian Rapoport. You know, the guy LaCanfora flaunted his cyber muscles towards at 1:40 AM back in February of 2016.

@RapSheet keep my name off your lips. Always. Remember this. I know you will

An “NFL Insider” would know that it is practically impossible for the Ravens to ink Lamar to a new deal in 2021 due to cap constraints. RSR’s Brian McFarland, who has forgotten more about player contracts and the cap than the combined craniums of LaCanfora and Weinman will ever know, has said as much repeatedly via several platforms. The team is on record saying that the 2019 NFL MVP will eventually be signed and Lamar hardly seems agitated or affected by it. In fact he’s often publicly praised “EDC”. In other words, none of the involved parties are concerned that such a contract is in jeopardy.

So what is it the Inside Accessors want Bisciotti to say?

What does Steve really NEED to say publicly?

You can rest assured that Bisciotti regularly talks to Harbaugh and DeCosta – probably Ozzie too. Isn’t THAT communication more important anyway? Maybe LaCanfora wants to cover someone like Jerry Jones who is a regular guest on Dallas’ 105.3 The Fan. Maybe he’s jealous that 105.3’s morning host Shan Shariff has developed a relationship with Jones that he could only dream of having with Bisciotti. If so, yesterday’s nightmarish performance permanently dashed those hopes for LaCanfora and Weinman. And that’s just a few weeks removed from the pair dumping all over any hopes of developing the same with DeCosta.

Things are going great for the Ravens, all things considered. Would a more public Bisciotti make things better? Might his broadcasted words of wisdom help a banged up roster heal? Rhetorical question for sure.

As a fan of the team, I’m proud of what the Ravens owner does in the community – pledging $1M to the Hurricane Ida relief fund to New Orleans out of respect for the way his team was treated by the city during Super Bowl 47 week. I’m proud that my team along with The Stephen and Renee Bisciotti Foundation combined to donate $1 million to support four non-profit organizations in their efforts to combat the COVID-19 public health crisis. I’m proud that Steve and Renee made a $4 million grant in the name of Ozzie Newsome to assist historically Black colleges and universities.

“It gives me this great feeling for the next 30 years that I’m going to be running into accomplished people all over Baltimore and Maryland and they’re going to introduce themselves as Ozzie Newsome Scholars,’ Bisciotti told ESPN. “It’s like I’m planting a seed that will flourish.” ~ June, 2021

Yesterday LaCanfora, again, an alleged insider, emphatically stated that Bisciotti hasn’t attended owners’ meetings for years – that he’s regularly represented instead by Dick Cass. That’s either a boldfaced lie or bad information, take your pick Mr. Insider. I know for a fact that Steve goes to all the owners meetings in Florida and those meetings take place in the Sunshine State every other year.

So go on, spin your lies as if they were facts to the uninformed who put their trust in you. Go ahead and promote your ignorance or lies or both to fit your warped agenda.

Soon, just like your Twitter followers, those who watch every Sunday on CBS or those who listen to Inside Access, will do so for no other reason than rubbernecking.

That wreck on the side of the road has been identified as your integrity.

And along with it lies that of Weinman’s and the station’s management.