Ravens Use Air Attack to Overcome Yet Another Slow Start

While watching the first half of Sunday’s game against the Vikings, with Lamar spraying inaccurate passes everywhere, I started planning what I was would write for this column. Something like, “Lamar’s bad day as a passer dragged down the numbers for all the receivers” etc etc.  Then the second half happened, with its four straight touchdown drives (I’m including the one at the end of the first half) to storm back and take the lead.

That tremendous 10-minute drive from the third quarter into the fourth, the one that ended with the TD to Devin Duvernay to tie the game – that might’ve been the most amazing drive of the Lamar/Greg Roman era. It wasn’t propelled by big plays; the Ravens had to scratch & claw & grind for every inch on that drive. They had to convert 4th-&-1 from their own 27 just to avoid going 3-and-out! There were two incomplete passes, and a sack. Their average gain was less than five yards. It was the drive of 18s: the Ravens started on their own 18-yard line, and ran 18 plays to get the touchdown. That drive exemplified resilience and determination.

If your impression is that Lamar and the Ravens offense have been much better in the second halves of games than in the first half – well, the stats back you up.  Here are the splits by half for Lamar this season:

(2nd half stats include overtimes)

Hyde & Jekyll. Those second-half numbers for comp%, yards-per & rating would all be among the league’s top 6. But the first-half numbers are baaaaad.

What’s causing this? Heck if I know. Greg Roman said in an interview that he can no longer script the first 15, because every defense is playing them so wildly differently from week to week. The Lions & Broncos flooded the box and the short area with defenders. Indy played a passive vanilla. The Vikes rushed four, occasionally five (and won at the line!) while dropping deep to take away the long ball. Some defenses (at least Indy) are coming out with Ravens-specific game plans, and they’re doing stuff against the Ravens that they haven’t shown on tape against other teams.

Watching the game, I was impressed with Rashod Bateman, and thought Marquise Brown was having just a so-so game. The stats tell a completely different story:

Marquise was the best player on the field (not named Lamar) for the Ravens. He had a really terrific game. Bateman was just OK on the day as a whole. Patrick Ricard had a tremendous receiving game for a fullback.

Mark Andrews had maybe his worst statistical game of the season (Raiders game is the other candidate), but I want to emphasize that it’s not necessarily because he played poorly. The Vikings smothered him with a lot of defensive attention. Lamar relies on him a lot, and Mike Zimmer knew that. It’s clear that the defensive emphasis was to take Andrews away, and they largely succeeded. Lamar found other ways to move the ball. That’s a positive.

Tomlinson made his season debut as an intended receiver. 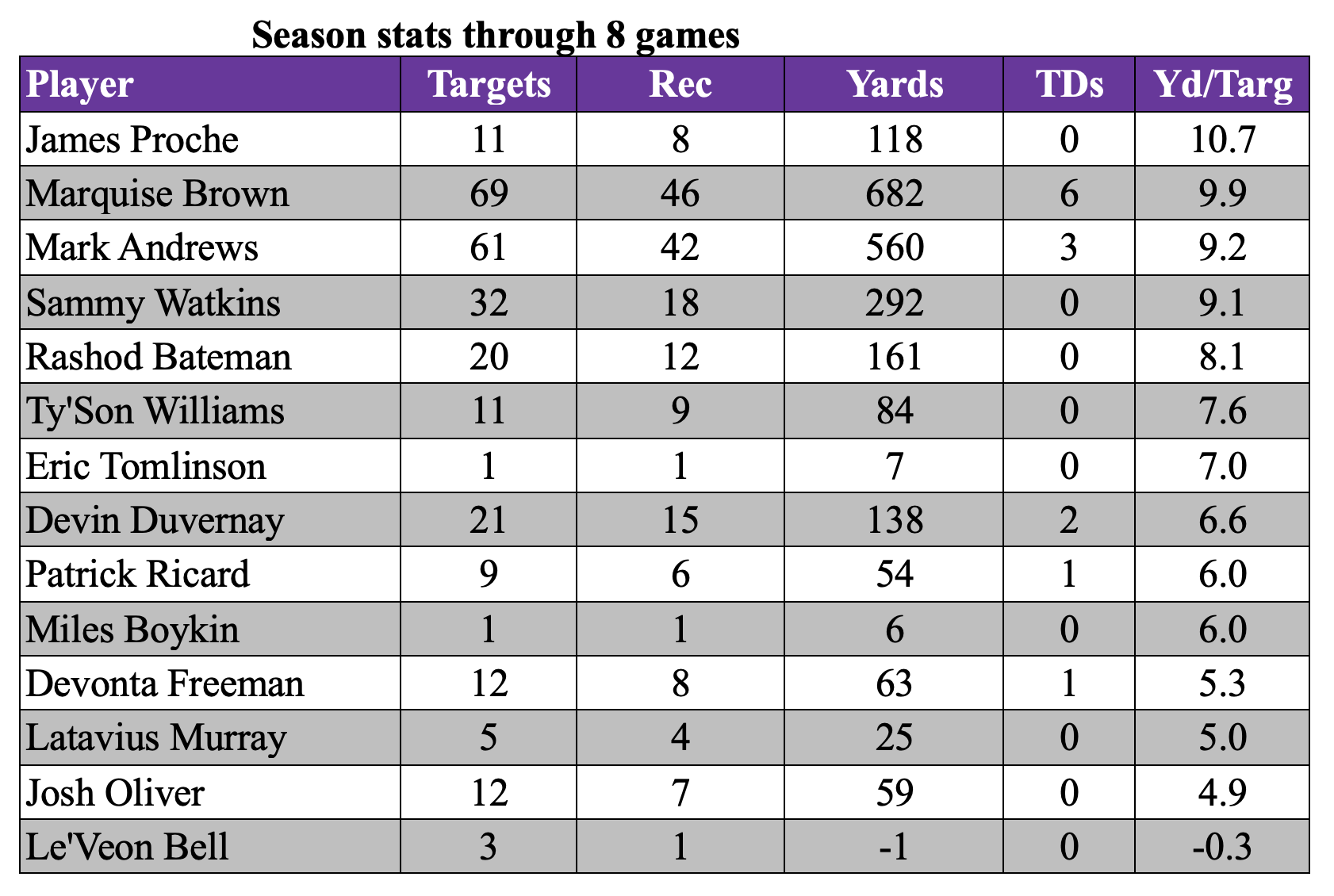 Andrews is on pace for about 1100 yards. He also has a solid shot at the Pro Bowl. He’s second among NFL tight ends in receiving yards. He trails Travis Kelce, but Kelce has played an extra game as the Chiefs haven’t had their bye yet.

Bateman has only played in three games. That’s a small sample to project from, but if he played 16 games at his current rate, he’d finish between 850 and 900 yards. Tremendous for a rookie.

Lamar is in the NFL’s Top Ten for passing yards and passing yards-per-game. If you want to hear a pundit make the case for Lamar as the NFL MVP, watch Marcus Spears from NFL Live the other day:

.@mspears96 with quite the comparison for Lamar Jackson 😳

Next up: Thursday Night Football!  The Ravens travel to Miami for a date with Tua Jacoby Brissett and the Dolphins.

We had a death in the family late last week. There’s been a lot to do in terms of contacting family & friends, making funeral arrangements, etc. By Friday or Saturday, I was really looking forward to sitting down in front of the Ravens game and forgetting about all that crap. I mean, REALLY looking forward to it. My stepdaughter joined me in the family room to watch the game.  We were sharing our groans of frustration and “Welp, guess it’s not our day” thru the first half and the kick return to open the second half. Then we were cheering and yelling at the TV for the rest of the second half and overtime. My wife joined us for the fourth quarter and the OT; she doesn’t always watch. It was loud and it was carefree and it was togetherness.

I know a lot of fans think that a season where your team doesn’t win the championship, is a wasted season. I suggest that you look at it differently. The times you spend together with family, yelling at the TV and saying, “Did you see that?!?” etc; those times are not “wasted”. The season gives us 16 17 chances for those. Value them.