The Ravens just can’t enjoy prosperity. With an opportunity to advance to (7-2) against a team that has looked rather lifeless for most of the 2021 season, John Harbaugh & Co. hopped a plane to Miami and absolutely embarrassed themselves against the Dolphins on a National stage. THEY morphed into the lifeless, listless, rudderless, melting mess of homogenous nothingness team that last night’s opponent had been all season. So, instead of being the unequivocal top dog in the North, the Ravens are (6-3) and with a Pittsburgh win over the winless Detroit Lions, the teams will be tied for the division lead.

I get that it’s a week-to-week league and we can all be imprisoned by the moment, but what the Ravens did last night ranks among the franchise’s ugliest performances of all time. In my mind, it was THE WORST considering that the Dolphins came into the game as the 30th-ranked offense “supported” by the 30th-ranked defense.

Let’s just keep this as brief as possible and if you have to opt out right now, I totally get it. Go enjoy your weekend. This is one of those games you just hope the team learns from, forgets about and then moves on to the next one. And just maybe they might avoid being labeled frauds. But to do so they’ll have to have some answers on November 21 in the Windy City.

Mark Andrews caught 6 of 8 targets for 63 yards and a score…Rashod Bateman made a couple of nice catches and finished with 80 yards on 6 grabs…Patrick Queen made a few physical tackles and nearly had the trifecta with a strip-sack and fumble recovery but he got a little too greedy trying to advance the fumble and ultimately never made the recovery…Josh Bynes was physical defending the run, registered a sack and had a clutch PD in the end zone…Justin Houston was stout off the edge in run defense and pressuring the quarterback. He finally eclipsed the century mark in career sacks…Odafe Oweh was relentless in pursuit of Jacoby Brissett and Tua Tagovailoa. He had a sack, two tackles for loss and 3 QB hits…Calais Campbell was stout defending the run, contributing 4 tackles at or near the line of scrimmage.

Lamar Jackson looked clueless at times. He showed some indecisiveness, regularly opted not to account for the blitzing safety Jevon Holland who repeatedly tipped his bad intent, almost willing to take himself out of plays had the Ravens made the right countermoves. Lamar also made poor choices with RPO’s. Far too often he waited for the play clock to wind down close to zero which helped Miami defenders to enjoy quick get-offs. It also prevented the Ravens from checking into more favorable plays pre-snap. Of course when they did check out, they played the horizontal passing game which played right into the hands of the Dolphins speedy secondary. Other times Lamar could have cut his losses by just throwing the ball away and live for another down. Instead he took some sacks that could have been avoided in order to set up a more favorable next down and distance…Bradley Bozeman’s snaps were rather erratic…

Sam Koch average just 40.1 yards per punt and missed a couple of opportunities to pin the Dolphins back…even Justin Tucker had an off night, pushing it wide right from 48 yards out…Harbaugh opted to go against the Ravens’ norm on Thursday at the Miami 30, while facing a fourth-and-3. I’ll repeat, the Dolphins were the 30th ranked defense at the time and even with a failed conversion attempt, the Ravens would just be turning it over on downs at the 30 to the 30th-ranked offense. I guess the magic 8-ball analytics machine was malfunctioning.

The Ravens slow starts on offense have become the norm. On Thursday, Lamar & Co. took it to a new level. Down 15-3 in the fourth quarter with 7:40 left (not a typo), the Ravens took over at their own 1 yard line following a punt. They immediately took a delay of game. What were they doing before starting that possession? This was just a microcosm of how poorly prepared they were the entire night …The offensive line was a sieve and the biggest culprits were Alejandro Villanueva, Ben Powers and Tyre Phillips. AV and Powers at times looked like they were playing pin the tail on the Dolphin while Phillips moved like he had a ball and chain strapped to both ankles. Even on a 2nd-and-1 at the Miami 45 with an opportunity to put some semblance of a drive together, AV and Powers couldn’t get their act together as Villanueva ignored Zach Sieler in order to “help out” on tight end along the left edge while Powers opted to go hunting for a second level block. Sieler said thankyouverymuch,  penetrated the backfield unabated and dropped Devonta Freeman for a four-yard loss. One failed play later the Ravens signaled to the bullpen for Sam Koch!

Sammy Watkins should have taken another week off. He caught 1 pass on 2 targets and the one he caught, he coughed up.  The fumble was scooped up by Xavien Howard who rambled in from 49 yards out for the game’s first TD. On the Ravens first possession, Watkins either lost the ball in the lights, thought he was closer to the backline than he actually was or maybe he was looking for his South Florida family in the upper deck. It was a horrible effort on a pass that could have been a touchdown had Watkins tracked the ball properly.

Did Sammy Watkins lose this in the lights or think he was out of bounds? pic.twitter.com/4IAloGck4p

To say that Offensive Coordinator Greg Roman was poorly prepared would be a gross understatement. He was completely outclassed by the Dolphins defensive brain trust. The Dolphins were smart to do the same thing over and over until the Ravens made them pay the price by adjusting. And what the Dolphins did regularly was run Cover-0 blitzes on third down. Roman had no answers and looked completely clueless by taking the same failed approach time after time after time, challenging the principles of insanity. And that in large part is why the Ravens were just 2 of 14 on third down conversion attempts against a defense the was second worst in the league in such situations…Seeing that his offense had zero tempo (at least I think he noticed) Roman opted NOT to go no-huddle even with under 7 minutes to go and down by 2 scores. Why is that?

When asked about Miami’s Cover-0 success after the game, Harbaugh said,  “The plan that we had wasn’t up to par.”

Up to par? Try “triple bogey”!

Defensively, the open field tackling, particularly by members of the secondary, was awful as were the communication breakdowns. Among the guilty parties in the “We have a failure to communicate” group were Chuck Clark (second straight week) and Geno Stone. These blown assignments helped spring chunk plays by the Dolphins of 35, 52 and 64 yards.

This was just an excruciating game to watch but I have to admit, I did crack up watching this play.

1) Mossed his own f'kin running back
2) Juked a defender out of his own ankles
3) Flipped 360 degrees over his head and extended the ball to BREAK THE PLANE of the GL while doing so!!!

AND YOU TOOK HIS TD AWAY!?!? pic.twitter.com/uF8SQb68iR

I no longer know what to expect from the Ravens on any given Sunday. They still control their own destiny at (6-3) but if we’re being honest, this team could just as easily be (2-7) with near losses to the Chiefs, Colts, Vikings and Lions. Fortunately they aren’t. The game in Chicago is pivotal and should be telling. The Ravens get some players back from injury who should help.

Harbaugh & Co. have weathered adversity all season. They’ll get a chance to do it again in the days leading up to their trip to Soldier Field.

Those are the words of John Harbaugh. Maybe that’s just the Ravens way. It has been that way since, well, as long as I can remember. 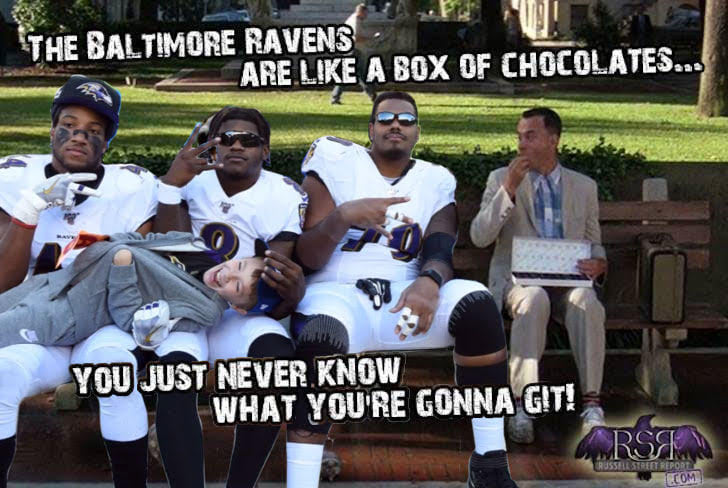