The Ravens ground out an exciting win over a divisional opponent, on the strength of suffocating play from their defense.  They’re currently #1 in the AFC by virtue of tiebreakers, and control their own destiny.

This is a column about passing offense, so it won’t be as positive as the big picture would indicate. The game was Lamar Jackson’s worst as a pro by passer rating (in a regular season start). A rating of 46.5! Four INTs! Dreadful. He knows it, too. You can watch him berate himself in an interview here:

“Bad passes, inaccurate, underthrown passes. That’s all I seen. Bad reads,” Jackson said. “I looked like a rookie. … Ain’t no excuses. I’m supposed to play Lamar-ball and I didn’t. … That was just a bad performance. Four interceptions. Hope that never, ever happens again. Not ever.  …  I let it fester. I need to feel that pain.  That’s pain right there.”

It’s not just one bad game, either. Since Lamar’s record-setting performance against Indy on Monday Night Football in October, he has gone:

That’s quite bad. The passer rating would rank 64th among quarterbacks; the yards-per-attempt would rank 55th. If you’re looking to me for an answer as to “why”, or what specifically is going wrong, I don’t have one. I suspect it starts with pass protection. That leads to the idea that it’s not Lamar’s “fault,” but the Ravens need to be careful. Last season, Lamar’s mechanics broke down behind leaky pass-pro, and it led to serious problems in his play. Bad protection can cause bad play from a QB, which persists even after the O-line is fixed. I don’t think we’re quite there, but it’s worrisome.

Here’s a frustrating example from the game.  Is this non-target due to bad protection, or bad vision from the QB?

Duvernay might be the most open any Raven has been all season.

Lamar drops his eyes, tucks the ball, shuffles, comes back up, doesn’t see it at all, throws it away, roughing the passer. pic.twitter.com/GyN6AVi678

One thing that’s interesting is that Lamar’s three worst career (regular season) games by passer rating were all wins for the Ravens.  In Lamar’s nine worst career starts by passer rating, the Ravens are 8-1  Obviously a lot of that is great defense & special teams, but it’s also true that even when he’s not “on”, Lamar still makes plays to keep the chains moving. He runs; his “gravity” opens up holes in the run game for other backs; he can throw a few straight bad passes in a row, then bail out the team with a “playground” heave. Lamar’s BAD games remind me a little bit of Joe Flacco’s bad games, in this sense: no matter how bad he stinks it up for three quarters, if it’s within one or two scores in the 4th, the opposing defense still has a serious problem. With either QB, the Ravens have always had a puncher’s chance.

Here are the game stats:

What jumps out here is the over-reliance on Mark Andrews & Marquise Brown. Granted that they are the two most explosive weapons in the passing game, but opposing defenses know that too, and they key on them. That’s why Sammy Watkins & Rashod Bateman are here, to spread out the defense and give them too many weapons to defense. Both of them caught everything thrown to them.

But to me, the stats for Watkins & Bateman & Hollywood reinforce the idea that the issue starts with pass-pro. On passes to those players, Lamar went 13 of 15. That’s fantastic, 87%. But they only gained 6.0 yards-per-target on those passes. Looks like Lamar had time to throw short, but not throw deep. Of course, it makes sense that the Ravens would have trouble in pass-pro against the Browns. Myles Garrett is amazing. Jadeveon Clowney and Takkarist McKinley can get after the QB; Malik McDowell gives them a strong inside rush. They’re a good front-7.

Notice Devonta Freeman catching his only target. Over the last five games, Freeman has caught 15 of 17 attempts to him, which is 88%. He was great out of the backfield in Atlanta; caught 73 passes in 2015, and was over 7.0 yards-per-target the following year (when they made the Super Bowl). Terrific pickup by Eric DaCosta.

Tylan Wallace’s first target of the season! Good to get your feet wet, rook. 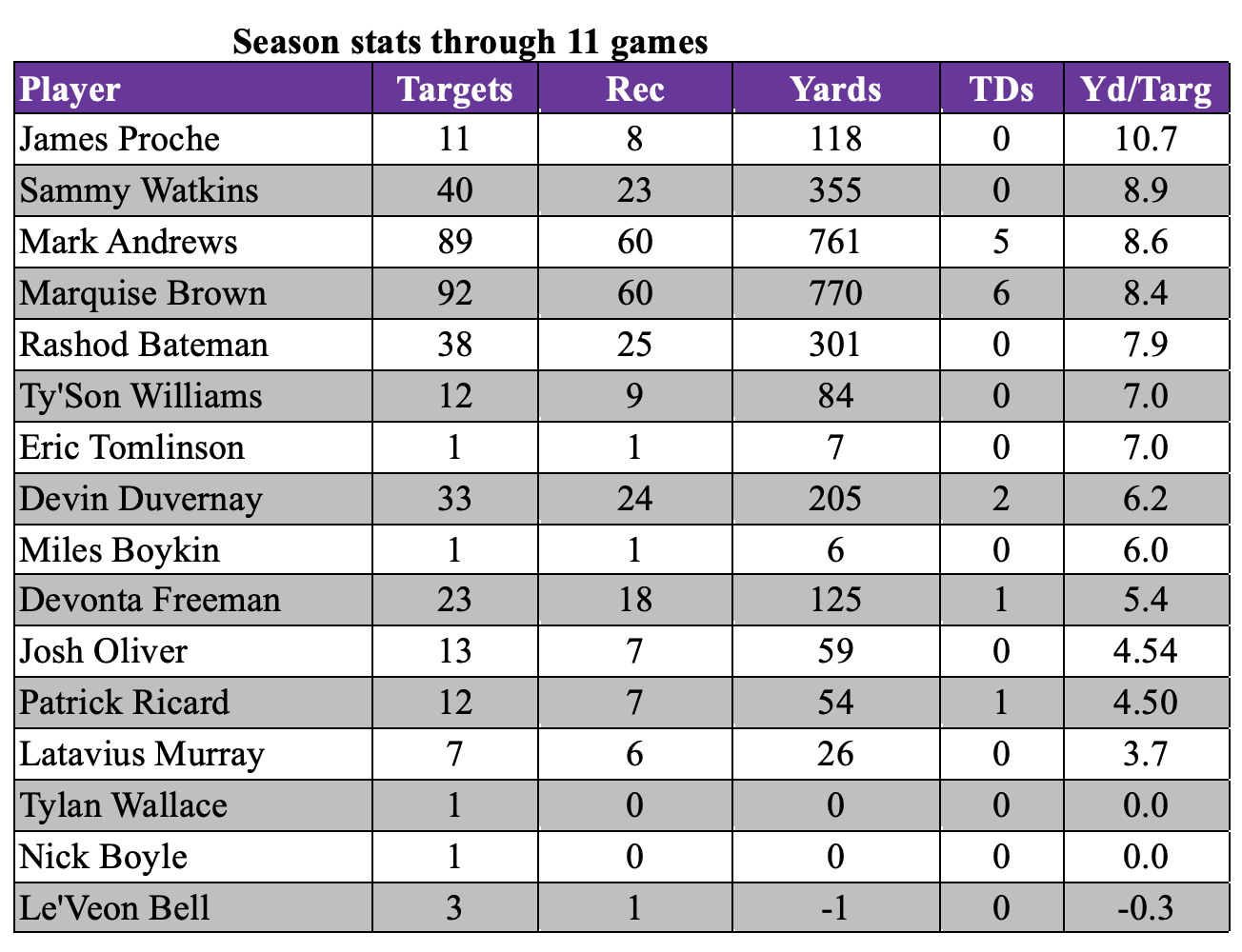 Marquise & Mark Andrews are still on pace for 1100+ yards.

Andrews is now only about 60 yards behind Travis Kelce for most from a Tight End.  I still got him in the Pro Bowl.

Bateman’s pace in his six games would put him on track for about 800 yards receiving. That would be second-most for a Ravens rookie WR, behind Torrey Smith’s 841 in 2011.

Next up: STEELERS WEEK.