Time For a Divorce?

Lamar Jackson has had a substantive body of work over the past several weeks, during which he’s played rather poorly. There’s plenty of blame to go around. The offensive line is bad. The offense misses Ronnie Stanley and Nick Boyle. The running backs aren’t what they used to be and are not a threat to take it the distance. Greg Roman’s scheme is substandard. Lamar is pressing and his fundamentals are broken.

Pick one! All are relevant and all are contributors to the teams substandard performance. Over the past four games the Ravens have averaged just 15 points and that’s when going against defenses that on average rank 15th in the league. The Ravens have already given up 43 sacks with five games to go. That’s already 11 more than the entire 2020 season.

Not only does this ineptitude make it difficult for the Ravens to effectively compete, it also makes it a challenge for the team to assess Lamar’s market value. Will he be the player he was in 2019 moving forward? Can he even be the player he was at the start of the 2021 campaign?

There are legitimate reasons for Jackson’s substandard performances. But clouding his contractual picture is one big, fat overriding concern. How much of these struggles are on him?

There’s little doubt that the Ravens will address the offensive line during the offseason. They have little choice. Stanley and Boyle should be healthy to start 2022. J.K. Dobbins and Gus Edwards will be back. Those concerns today will be removed from this perplexing offensive equation.

But what about Greg Roman and Lamar? What if all of the above is effectively addressed yet the struggles continue in 2022? What if despite the expected improvements, the Ravens offense under the on-field guidance of Lamar and the schematic design and play calling of Roman, continue to have no answer for blitz-happy teams.

Who is at fault and how do you then gauge Lamar’s worth?

Before they are forced to negotiate a long-term deal, the Ravens do have Jackson’s fifth-year option that they can use next season and if need be, GM Eric DeCosta can use the franchise tag on Lamar in 2023 if the picture remains clouded – although admittedly that is a huge financial drain on the team’s 2023 cap.

Or maybe the best answer is to remove Roman from OC duties and bring in someone with a proven track record who has worked with mobile quarterbacks. Then the Ravens can determine if the struggles are grounded in offensive design or if it’s true that the league really has figured out the 2019 unanimous MVP.

That sounds like a cold-hearted suggestion. But for the long-term health of the team, wouldn’t it be better to sniff out the problem once and for all than to invest a ton in a player whose contract could sink the franchise for several years to come? That’s a torturous question that might lead to sleepless nights for Messrs. Harbaugh, DeCosta and Bisciotti.

“A little bit. A little bit, and we’ve done a good job with it. That game was … It was what it was; it was a little bit of an aberration, but it’s definitely something that we work on full speed. We’ve seen some of it; the touchdown the other night was one of them. We always want to take the approach of bring that blitz on, [and] we’ll make you pay – that’s our attitude.” ~ Greg Roman on whether he has concerns over more teams becoming more blitz happy against the Ravens

Now that Marlon Humphrey is out for the balance of the season and the Ravens will have no choice but to rely on players like Anthony Averett, Jimmy Smith and Chris Westry to defend the boundaries, you have to wonder if Wink Martindale might make some philosophical changes in his approach to game planning.

Wink hasn’t had Marcus Peters at his disposal. DeShon Elliott has been absent for weeks. Tavon Young hasn’t been 100% and now the heart and soul of Martindale’s defense is on the shelf until 2022. He can’t possibly make the same calls given the available personnel, right? Greg Roman wouldn’t ask Joe Flacco to run the same offense as Lamar Jackson, would he?

I expect a more conservative game plan from Wink – one that leans towards the bend-but-don’t-break tendencies of Martindale’s predecessor, Dean Pees. That might not match up well with the defense’s DNA, but the team may have no other choice.

One thing that has been suggested to help Wink’s depleted roster, is to start fast on offense. That might work in theory but in the real world the Ravens have scored just 30 points all year in the first quarter through 12 games. Do the math.

But if a fast start offensively is what John Harbaugh decides will help his defense, then they better unleash Lamar with a huddle free approach right from the jump. What have they to lose, 2 ½ points in the first quarter?

In his Late For Work (“LFW”) piece on the Ravens official site yesterday, Kyle Barber listed various members of the media who either agreed with Harbaugh’s decision to go for two and those who disagreed. My initial displeasure over the decision was listed first among the dissenters.

Horrible decision when Tucker is your kicker!

Mine was a knee-jerk response following the offense’s surprising rise from the ashes of incompetency (in no-huddle mode mind you) to get within a point of tying the game. When Justin Tucker is your kicker, you advance the game into overtime. The guy has made 56 straight in the fourth quarter or overtime. That’s a weapon! Hence my knee-jerk Tweet.

What I was not aware of was Humphrey’s injury. When I learned of the injury that would sideline the Ravens best DB and after considering the Steelers effectiveness on offense in that fourth quarter, I totally understood where John was coming from. I made that point clear in my Good, Bad & Ugly article following the game. Harbaugh made the right call. But since that didn’t fit the narrative of the LFW article, my Tweet was included.

The play call on the two-point conversion attempt was there, although I question the design and execution given the presence of T.J. Watt. The slot receiver on the right (Marquise Brown I believe) should have chipped Watt. And if Brown isn’t physically capable of such a chip, then the Ravens should have lined up someone else in the slot who could disrupt Watt, even if for just a second or two. If so, game over. Ravens win.

Kinda wild how nobody is talking about the DT blatantly set up offside pic.twitter.com/s08ryxWBQo

Oh, one more thing. The Steelers DT was offsides. 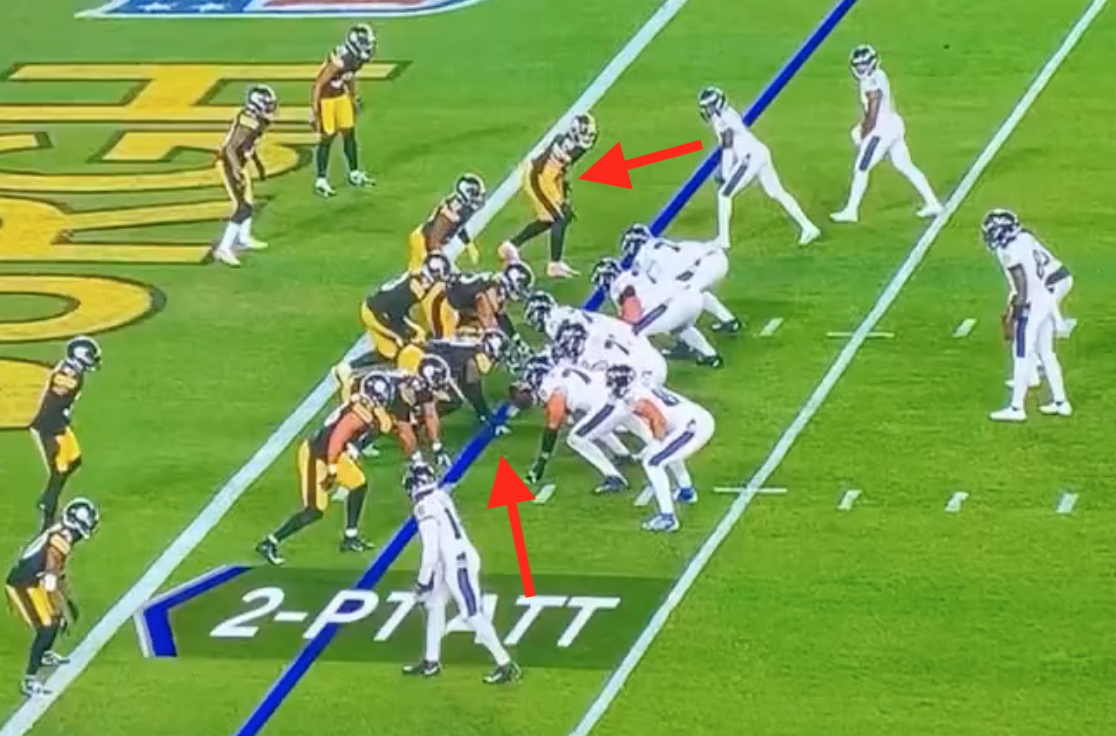 Following the game on Sunday, Mike Tomlin was asked if he was surprised by the Ravens decision to go for two. His response?

“[The Ravens] aggressively play analytics and from that standpoint they’re predictable.”

The Ravens also aggressively played analytics when the Steelers had the ball on the Ravens 13 with 2:00 to play, facing a 2nd and 2. Chuck Clark intentionally jumped offsides to give the Steelers a first down in order for the Ravens to more effectively use their three remaining timeouts. If the Steelers converted the 2nd and 2, the Ravens would have had to burn a timeout leaving them just two. But the Steelers could then have killed the clock with the fresh set of downs.

So it all begs the question…

Coach Tomlin, if the Ravens are so predictable with their analytics, then why didn’t you decline the penalty?