Your Weekly Shot in The Dark

The Ravens travel to FirstEnergy Stadium to take on the Browns for the second time in three weeks. It marks the Ravens third consecutive AFC North contest and the second in a row on the road. This strange quirk in the schedule which pits the Browns against Baltimore in consecutive games for Cleveland, a team coming off a bye is a decided advantage for Baker Mayfield & Co. and Las Vegas has clearly taken notice, installing the Browns as 2 ½ point favorites.

Here are the RSR Staff predictions for the all-important divisional showdown.

There is absolutely nothing about this game that I like. Mayfield’s back is up against the wall and he’s had three weeks to process the Ravens, a team now without its best corner. He needs a statement game to help justify his next contract. Myles Garrett must be as excited as a sailor on the strip in Vegas after years on a merchant ship, knowing that the only thing standing between him and Lamar Jackson is Tyre Phillips. The Browns season is on the line. They are a relatively rested team and they will come in hot. They have no choice. A loss will drop them to (6-7) and at best the networks will label them “In The Hunt” during primetime recap shows. And they ain’t havin’ it!

• Mayfield will toss three touchdown passes and throw for over 300 yards, 45 of which will come on yet another Ravens breakdown in the secondary that will leave Donovan Peoples-Jones wide open for a score.
• Nick Chubb will continue to struggle against the Ravens defensive front and be held to under 60 yards rushing.
• Myles Garrett will match T.J. Watt’s output against the Ravens in Week 13 with 3 ½ sacks of his own. Jadeveon Clowney will add another 1 ½ takedowns of No. 8 while the Browns as a team drop Lamar 6 times.
• The Ravens will take the early lead despite the Browns attempt to set the game’s tempo. They’ll score on their opening drive capped by a short scoring toss to Eric Tomlinson. But that will end the Ravens scoring in the first half.
• The Browns will out-gain the Ravens 420 yards to 270.
• My BOLD predictions have been so bad lately that you all should feel good about these, instead of dropping “F” bombs on me. I have a better shot at the Maryland State Mega Bzillions then being right on this prediction post this season.

I need to see something out of this team before I can predict them to win a tough road game. As of right now, Lamar is playing awful football and the tackle position is really bad going into this game, vs Clowney and Garrett.

The Browns are coming off a bye and are pretty healthy although 2 sneaky COVID issues for them this week are David Njoku and now their Punter, Jamie Gillan. If neither play, that could cause issues for them.

Also, the Humphrey injury likely shows up in this game although it probably doesn’t hurt them as much this week as it will in other games the rest of the year. 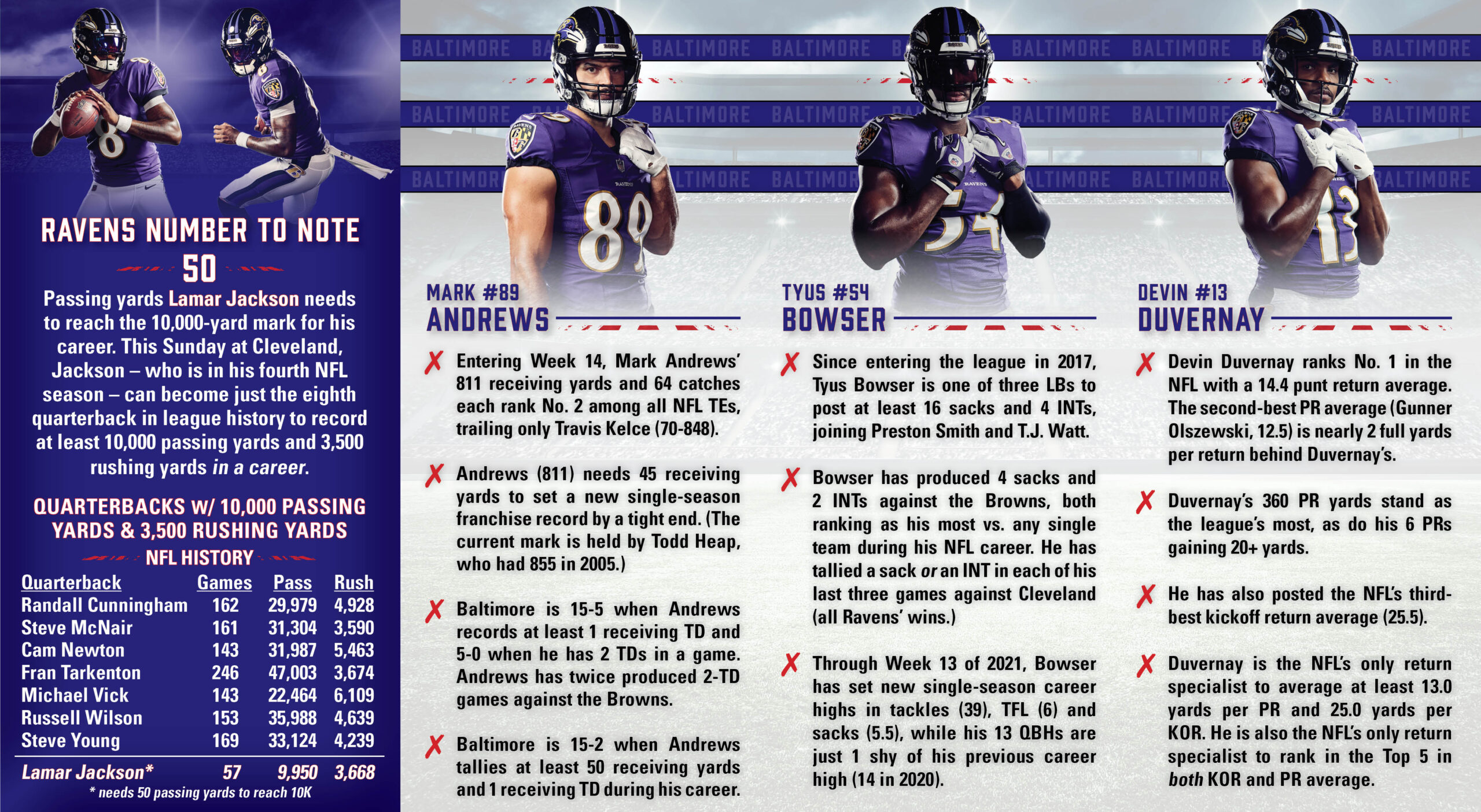 Trying to predict what the Ravens are going to do week to week, or even possession to possession, has been an exercise in futility this season. Baltimore was able to top Cleveland two weeks ago, despite gifting them four interceptions, because of a stellar defensive performance and some timely big plays on offense.

I think this week plays out a bit different. Here are some predictions:

• Nick Chubb tops 100 yards on the ground, including more than 70 in the second half.
• Lamar Jackson doesn’t throw four picks, but he does throw one, to go with two touchdowns.
• Baker Mayfield takes advantage of having a week off to have a nice game, throwing for more than 250 yards and two touchdowns.
• Odafe Oweh gets two sacks.
• Rashod Bateman grabs a 50-plus yard touchdown.

Coming off a heartbreaking loss in what was likely their last time facing Ben Roethlisberger in Pittsburgh, the Ravens are this week’s NFL punching bag in the public eye. It’s understandable, given the injury list that seems to be growing faster than Browns’ fans egos in August, on top of the recent offensive woes.

Despite all of that though, the amount of people who have seemingly written off the purple birds this week will fuel them. If anyone can keep a ship like this afloat despite so much crumbling around them, it’s John Harbaugh and Lamar Jackson.

Cleveland will almost certainly bring more to the table offensively than last time with a week to rest and prepare, but Jackson also has a major chip on his shoulder. The last time these two teams met, the Browns intercepted him 4 times, something that still has to be stuck in his craw.

While the casual viewer would look at the standings and say this game is clearly more of a “must win” for the Browns, the Ravens need it just as badly if they want to cling to their narrow lead atop the division. That, on top of the aforementioned hate they’ve received all week (and of course, the purple pants being back), will be just enough to propel them to a much needed victory during this end of season gauntlet.

Facing the Browns only two short weeks ago, the Ravens seem like a different team this time around. Part of that is the loss of Marlon Humphrey, the rut Lamar is in and devastating division loss last week. They could snap out of it and go on a tear but I must admit I don’t think it’s likely. I haven’t lost faith in the Ravens, I just don’t see them fixing their problems this quickly, considering the injuries they continue to endure all season long at an alarming rate. Currently the Ravens are (1-2) in the division. A loss this weekend could make winning the division extremely difficult.

• Lamar Jackson makes some improvements by avoiding interceptions and playing a conservative game relying heavily on his legs. Running for 80 yards and passing for 175 yards.

• Devonta Freeman continues to look better every week in this offense and will have 100 total scrimmage yards and a touchdown.

• Bateman re-emerges with 5 catches for 75 yards. Still no touchdowns.

• Calais Campbell will record a sack and batted pass.

• The defense will again shut down the rushing attack and hold the Browns to under 60 rushing yards.

• The Ravens pass defense will have their hands full. No predictions here just hoping it doesn’t get ugly.

Last week, I was yelling at the TV right along with most when I saw Lamar Jackson run out for the two-point conversion. After John Harbaugh’s explanation after the game, I understand the decision, but the lack of faith worries me. I’m trying to find the positives with this Ravens team, but I get a gut feeling that the Marlon Humphrey injury is going to be the straw that breaks the camel’s back. They’ve been flirting with disaster all season and I think it’s going to start catching up with them.

That said, I’ve been incredibly awful in picking Ravens games so this should give you all a bit of hope that I’m picking Cleveland this week. This will be a theme of mine for the last five weeks of the season, but I just don’t have the faith that the Ravens will be able to slow down, well, anybody. Lamar will have to be superman for this team to make any noise with the gauntlet of games they have coming up and he has been anything but the past month of the season.

Sorry to be doom and gloom, but…

How can you not be romantic about football?

I know, I know, we’re talking about Ravens-Browns here. But the end of Thursday Night Football was just too good to not mention.

It also served as yet another reminder what a ridiculous league this is. The Vikings lost to the previously winless Lions on Sunday, then had a 30-point lead on the Steelers before deciding to try to choke it away.

So anything can happen, as we know. I’m not giving up on this Ravens team. I think they still have some magic left, and will surprise us a bit down the stretch – in ways both good and bad. But this week? The cards are just stacked too highly against them, from the quirk of the schedule that lets Cleveland spend a month preparing for them and nobody else, to the latest season-ending injury to a starter.