There’s no denying that prior to his ankle injury in Cleveland, Lamar Jackson was in the midst of an extended slump. And during the five minutes he was on the field this past Sunday which covered the first quarter and one play, there was absolutely no sign that the slump might end. The Ravens ran a total of 10 plays on Sunday with Lamar that netted 22 yards including a sack, a holding penalty (on Alejandro Villanueva) and a declined ineligible receiver downfield (on Tyre Phillips).

Huntley was thrown into a baptism by fire. With tackles that resembled turnstiles when taking on the likes of Myles Garrett and Jadeveon Clowney and without the services of Patrick Ricard and Nick Boyle who are reinforcements in pass pro and in the running game, a long afternoon for the sophomore signal caller was expected. Instead the former Utah Ute from Dania Beach, FL filled in admirably and nearly brought the Ravens back from a 24-3 deficit. Huntley was 27 of 38 for 270 yards and a touchdown for a passer rating of 99.7. He also ran for 45 yards.

Those numbers are very Jackson-esque, circa 2019.

Now granted the Browns may have changed their defensive approach while up by 21 points. It’s also quite possible that they relaxed a bit and took the pedal off the metal a tad. With a commanding lead at home and no Jackson to contend with, anyone watching that game thought it was over, right?

The narrow-minded among you might think that there’s a QB controversy in Baltimore. There’s not. But the developments concerning Lamar, or dare I say the lack of development, certainly call into question Lamar’s market value.

We’ve all heard the narrative of how the league has caught up to Lamar. We heard it during the postseason of 2018 and then again in 2019. In 2020 he won a playoff game in Nashville only to be embarrassed in Buffalo the following week. Once again the narrative surfaced.

But 2021 happened and Lamar seemingly carried the Ravens on his back to a (5-1) record after an opening day loss to the Raiders in Vegas. When everything around him seemed to be crumbling, Jackson found a way to win. Suddenly the national narrative was – “Lamar is a serious MVP contender”. Eight weeks later, some wonder if he’s a pretender.

Since the Dolphins introduced the all-out assault on Lamar with their complex blitz schemes, others have followed suit with great success. Since that Thursday Night game in Miami on November 11, the Ravens have averaged just 16.6 points per game. They’ve lost three of those games. Of their two wins, one belonged to Huntley in Chicago and the other was a 16-10 win at The Bank over the Browns, during which Lamar threw four interceptions on his way to a 46.5 passer rating.

That buzzing sound you hear is the “they’ve figured out Lamar” crowd…again.

If it was only that simple…

We knew from the jump that Lamar would be protected by a less than ideal offensive line, specifically in the passing game. We also knew that the losses of J.K. Dobbins and Gus Edwards would hurt. But there was also the belief by some, that the backs didn’t matter – that the threat of Lamar as a runner opens the field for the backs regardless of who they are. In other words, the Ravens should be able to get above average production from average backs due to the pressure Jackson places on defenders – due to his forcing them to hesitate just a bit, consequently creating openings for the offense to exploit.

This may have sounded good on talk shows and podcasts, but in the real world, Dobbins and Edwards matter.

So with the rushing attack not running on all cylinders, pressure has shifted to the passing game. Early on this season, things seemed to be progressing splendidly. The receivers seemed to be running better routes thanks to the additions of assistants Keith Williams and Tee Martin. Lamar’s mechanics were more refined. He stepped into his throws driven by power and on-point fundamentals. Plus he spun the ball better than we’ve ever seen. Through the dramatic come-from-behind win over the Colts on Monday Night Football, Lamar’s passer rating was 104.4. Since then, his rating is 73.5.

Did Brian Flores and his blitz happy Dolphins show the world how to throttle Lamar and the Ravens?

The Ravens coaching staff would be quite taken back by that statement. It flies in the face of their ability to adjust, their ability to exploit weaknesses in the schemes of opponents. And maybe they have on their iPads. Unfortunately the results haven’t appeared on the field.

A look at All-22 film shows that Lamar is leaving plays on the field. Even with time to read through progressions, when receivers have seemingly created separation, Jackson holds the ball entirely too long. It’s as if he doesn’t trust what he sees.

Has he become a bit twitchy after being battered by oncoming rushers, perhaps altering his view of the field to focus more on the pass rush and therefore missing opportunities? Much like these images below and others that The Sun’s Jonas Shaffer describes here in detail.

Does he not trust certain teammates to make a play?

(For the record, Lamar was sacked on each of these plays) During Sunday’s loss to the Browns, Huntley gave Rashod Bateman an opportunity to make a play on two deep sideline patterns, trusting the impressive rookie to make a play. Bateman did exactly that, on both contested attempts. Perhaps Lamar should show similar faith in his pass catchers.

Huntley wasn’t flawless, but he has been unfairly criticized for the game’s last competitive play – a two-yard completion to Bateman on 4th-and-6. The play design, given the uncontested blitz by Jeremiah Owusu-Koramoah, had only one option. By the time Huntley is forced to throw, only one Ravens receiver has their head turned towards him. That’s a schematic flaw in a situation when you had to assume the Browns would blitz. 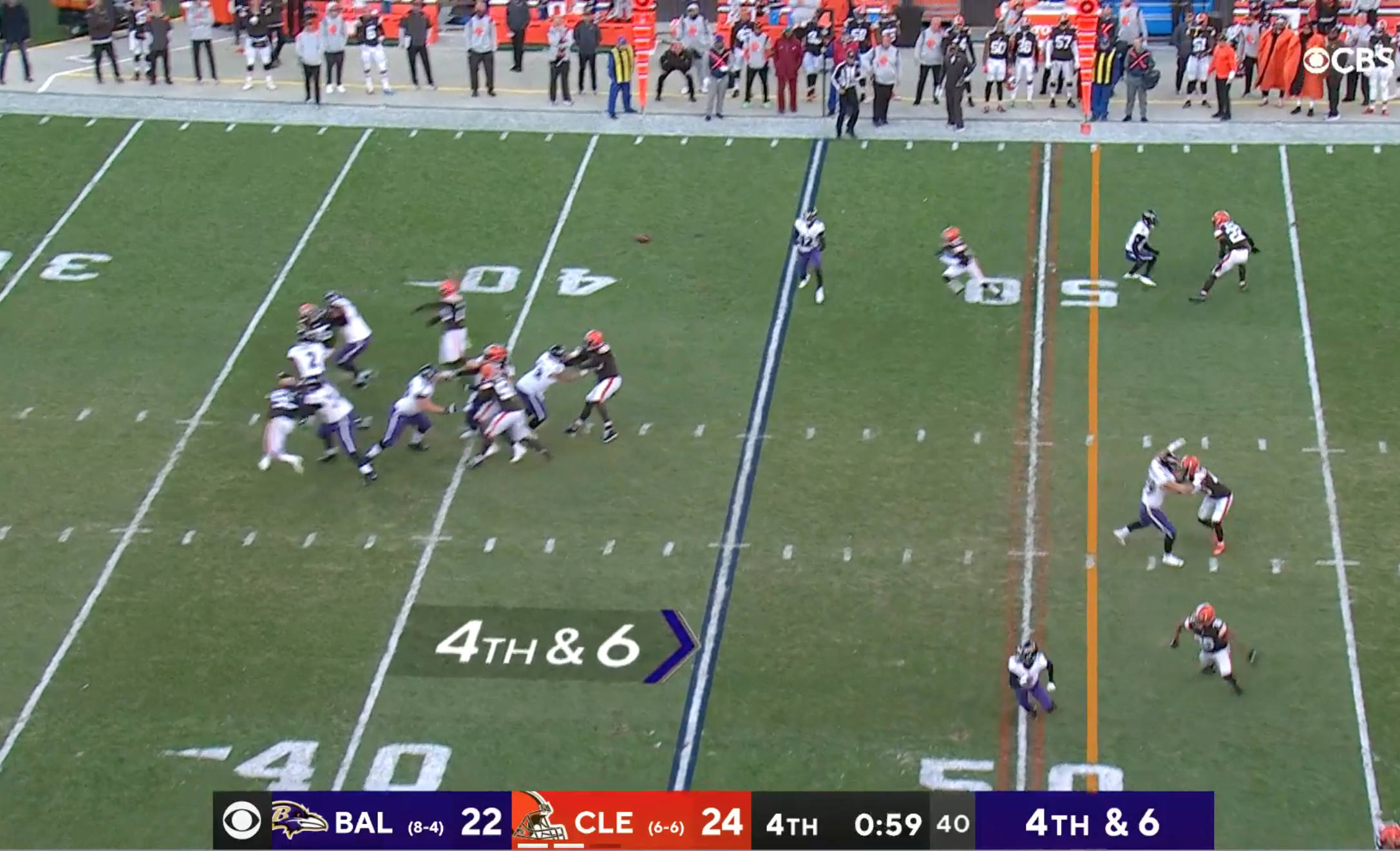 The Ravens lost the game and an opportunity to take a commanding lead in the AFC North. And now, given the uncertainties surrounding Lamar’s ankle, expectations among the fan base have plummeted. Some have turned their thoughts towards 2022 and what the Ravens can do in free agency, in the draft and on the trainer’s table to get better next season.

The Ravens will get back a top 5 left tackle; they’ll get back a pair of Pro Bowl corners; the running back room will be restored. Without question, GM Eric DeCosta will invest resources to strengthen and deepen the team’s offensive line. There’s reason to be optimistic.

Assuming of course the Ravens rediscover the 2019 iteration of Lamar Jackson.

If Lamar does return to the starting lineup for the remaining four games in 2021 and the same struggles continue (keeping in mind he’ll face teams that are blitzing regularly, particularly with his compromised mobility), how can they in good conscience make Lamar the game’s second or third highest-paid player? Would they be able to accurately assess if the struggles are schematic or are they matters of execution by the quarterback? Or might both Lamar and Greg Roman be culpable?

What if, after DeCosta addresses all areas of concern this offseason to fully complement Lamar’s abilities, the struggles still continue into the 2022 season? What if they continue after an extension for Jackson?

Roman would undoubtedly become the sacrificial lamb, but still there would be no guarantee that the problems are solved.

Earlier this year the Ravens exercised their 2022 option on Lamar. That will cost the team $23.106M in real money and against the cap next season. Should they franchise him in 2023, RSR’s capologist Brian McFarland expects that figure to be in the $35-40M range. The Ravens could reduce Lamar’s cap hit in 2022 with an extension, one that Brian believes will drop the cap figure to $8-13M in 2022.

But is that the smart, long-term move?

It’s a really tough situation that the Ravens find themselves in. Maybe they wanted to see more out of Lamar this season before they entered into a contract extension that would influence personnel moves for years. If that is the case, what they saw in 2021 wasn’t what they expected. It’s certainly not what they hoped. Maybe they’ll need to hit that reset button again in 2022.

And that’s a whole lot better than hitting the detonation button on the cap structure for years.

[Related Article: A Near Miracle From Huntley] 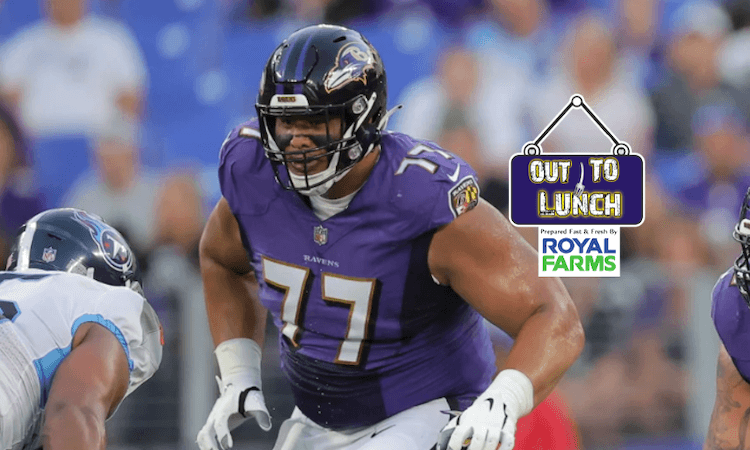 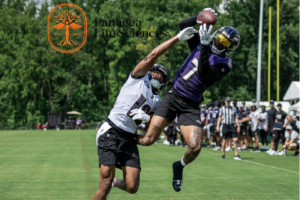 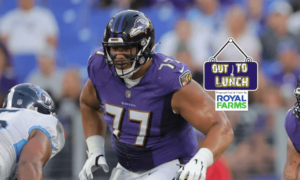 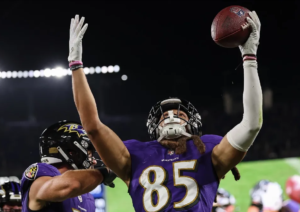 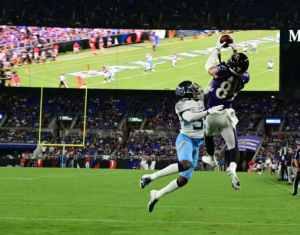