Unless the following things happen this weekend, the Ravens will not be a playoff participant. Instead they’ll be clearing out their lockers come Monday morning:

The most unlikely component of this “parlay”, on the surface, is Jacksonville beating Indianapolis. The Colts opened as 8 ½ point favorites and are now listed at (-15 ½) on the road! But here’s an interesting footnote as you randomly chant throughout the week, “Do you believe in miracles?”

The Colts haven’t won in Jacksonville since 2014. And here’s another noteworthy nugget. During their past 33 games, the Jaguars have gone (2-2) against the Colts – (2-27) against the rest of the league. So there is a small measure of hope.

But even if Trevor Lawrence & Co. pull off the big upset, the Ravens take care of business against the Steelers and the Patriots enjoy a South Florida fish fry, there remains a peculiar situation in Las Vegas that bears watching. If the other favored teams in the AFC win their respective games, the Raiders and Chargers could lay back, rest their starters for the playoffs and both would be assured of a playoff berth. The Raiders would be the 7th seed while the Chargers would be the 6th seed. 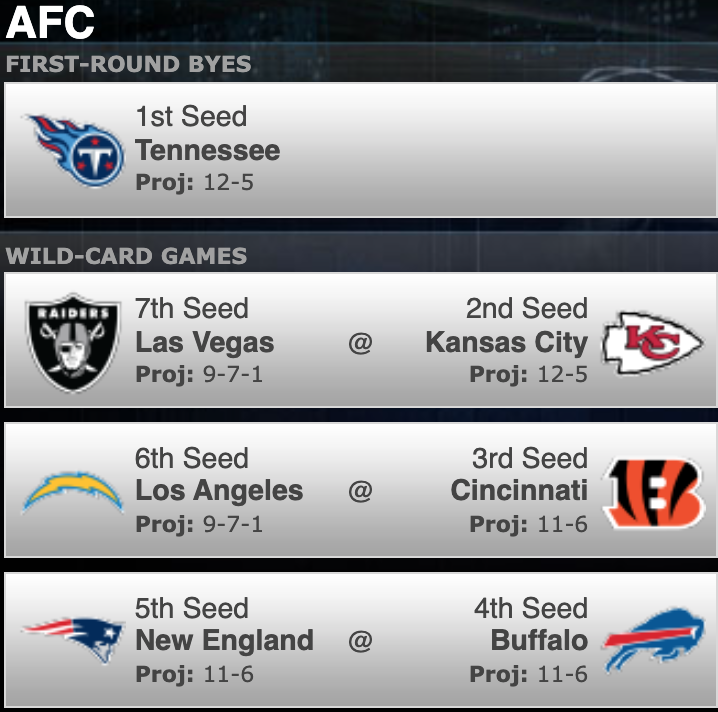 The Raiders and Chargers are however, bitter divisional rivals, so such a gentlemen’s agreement is unlikely. Imagine John Harbaugh and Mike Tomlin agreeing to such shenanigans. If the Chargers beat the Raiders, the most likely scenario then would be as follows, again assuming all favored teams win except for the Colts. 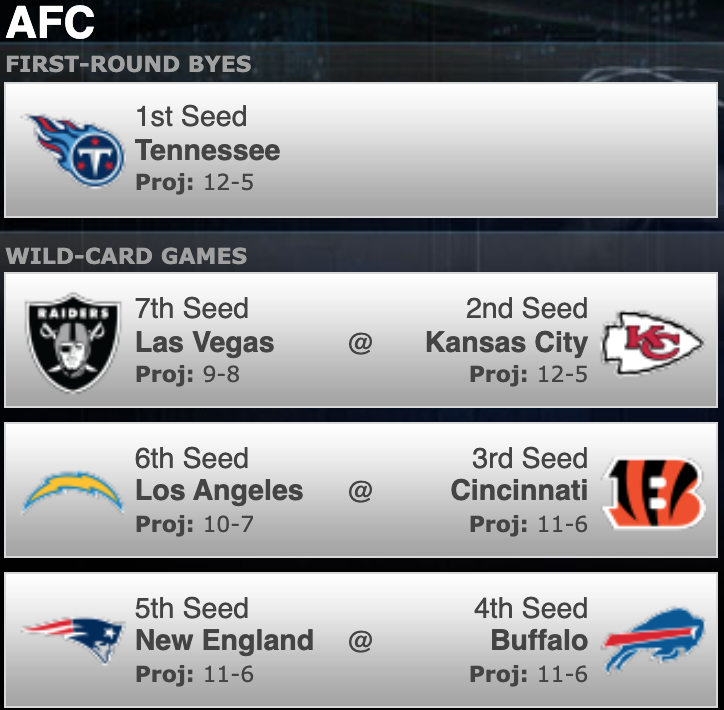 In this scenario the Raiders become the 7th seed and head to KC for the wild card game while the Chargers are off to Cincinnati. So even though the Raiders can lose and still get in, they would prefer to go on the road to Cincinnati instead of another visit to Arrowhead where they lost to the Chiefs 48-9 just 24 days ago on December 12. The Raiders did however, lose to the Bengals on November 21 by the score of 32-13. That said, they’ve lost 3 straight to KC. The incentive is there for the Raiders and should they beat the Chargers, and again, should all hold true as described above, the bracket would look like this: 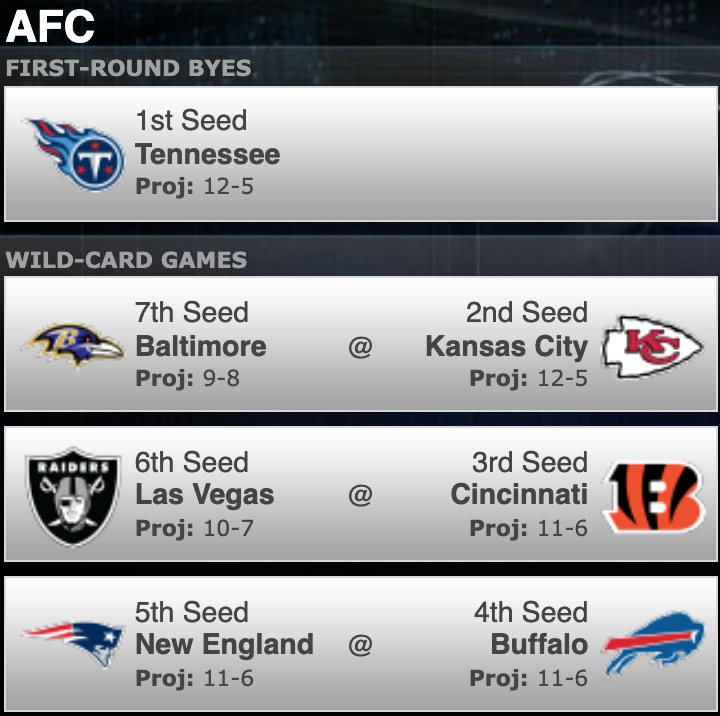 Of course none of the above matters if the Ravens fail to snap their five-game skid and allow the Steelers to sweep them for the second consecutive season. The Ravens are a surprising 5 ½ point favorite.

The Steelers enter the game with an improved rushing attack and T.J. Watt who has his eyes set on the NFL’s sack record for a season (22 ½ ). Watt needs one sack to tie Michael Strahan’s mark set in 2001. Both teams are trying to keep their long-shot playoff hopes alive with a win. So when you consider what’s at stake, the historical physicality of this rivalry and the fact that this is the last game of the season, bodies will be aching most of next week and it will certainly give a competitive edge to the host team should either of these teams survive.

It seems fitting that Ben Roethlisberger’s final game, the swan song of his career, would come against the Ravens. Roethlisberger has a career record of (16-10) against Baltimore with a passer rating of 86.2 to go with 42 TDs and 24 INTs. The Ravens sacked Ben more than any other team, dropping the big gunslinger 61 times.

Besides a Hall of Fame career, Roethlisberger has also been the author of plenty of drama. There was the motorcycling accident that could have cost him his life (2006). And then there were the sexual assault allegations, one in Lake Tahoe (2008) and another in Milledgeville, Georgia (2010). One ended with an out of court settlement while the other was dropped, due to a lack of credible prosecutorial evidence.

For some, time and improved off-the-field behavior have diminished the stain upon Roethlisberger’s reputation, while others still harbor a grudge and maintain that he got away with things that the average man would have paid dearly for.

On the field, Ben was a beast and his performances led to heartbreak many times in Baltimore. But perhaps even more memorable, were those times when the Ravens skull-dragged Roethlisberger-led teams, leading to some unforgettable celebrations.

In the end, no one can deny that the rivalry between the Ravens and the Steelers, arguably the best in all sports, would not have been the same without the guy from Lima, Ohio known affectionately by his fans as “Big Ben”.

Fitting that @untouchablejay4 is the #Ravens Legend of The Game on Sunday v. #Steelers https://t.co/v837XswmUS

Back to T.J. Watt for a moment, while I appreciate his massive talents, I’m not a fan of the player. He lacks the class of his brother J.J. Now if he wore a Ravens uniform…

Watt’s sack total which is likely to exceed Strahan’s 22 1/2 by the time the gun sounds to end Sunday’s game, is quite mind-blowing, considering the Ravens sack leader is Tyus Bowser with seven. But still, that 14-sack variance between the two team leaders might not impress Ravens defensive coordinator Wink Martindale all that much. Wink believes that sacks are an overrated stat.

“It’s one of those things that, if you were asking me, if you’re the owner of a team and I’m your head coach and it comes down to what do you want, I want as many cover corners as you can have,” Martindale once told The Baltimore Sun.

“Because the game is the passing game now. And I think sacks — we’re talking philosophical now; this is my opinion on it — I think sacks are one of the most superficial rankings there is. Because you look at guys that have a bunch of sacks, OK? There’s a lot of things that go into that.”

I thought maybe Wink’s interview with The Sun was conducted towards the back end of happy hour or perhaps it was Wink’s intent to devalue the statistic in part, to encourage his guys who lack it. So, to see if there was any street-cred to Martindale’s philosophical meanderings, I took a look at the teams this season in the Top 10 in sacks. Of those teams, only 4 are locks to punch their postseason dance cards: the Rams (47 sacks), Bucs (45), Bengals (41) and Titans (41).

So then I thought to look at some other statistical categories to see if there is any correlation between sacks and good defenses. Of the top 10 teams that have given up the fewest yards per game, only three, the 49ers (312.8), Bears (315.6) and Saints (322.1) are also among the top 10 in sacks. The top-ranked defense in yards per game allowed is that of the Bills at 286.5 YPG. Ironically, the Bills are tied with the Ravens at 19th in sacks, with 33. The second-ranked team in yards is the Panthers (299.5) and the Patriots (311.6). Those two teams have 38 and 35 sacks, respectively — and not among the top 10.

What I did learn, and to Wink’s point above, is that turnovers are crucial and that does speak to having cover corners. Of the teams with the best 10 turnover margins, seven are locks for the playoff and of those teams, just 1 (Bucs) is among the top 10 in sacks. Of the teams ranked in the top 10 in takeaways per game, nine are playoff locks and only two (Bucs, Rams) are on the top 10 list in sacks.

Don’t know if you had an opportunity to watch All Madden, but if not, seek it out. It was great television and the way in which it was produced, with John Madden watching along with you, is just great. With John by our side, we get to take a little trip through time as we revisit the achievements that built his legacy.

Towards the end, many take time to thank Madden and credit him for the impact he made upon their lives. The program first aired on Christmas Day. John passed just three days later. I watched the show on January 1 for the first time. I couldn’t help but wonder how the wonderfully expressed emotions of those who were interviewed, like Brett Favre, Troy Aikman, Lawrence Taylor, Bill Belichick, John Robinson, Al Michaels and others, would have been changed had they known that All Madden wouldn’t just be a fantastic tribute, but also a bittersweet eulogy.

At the very end, Madden was asked to respond to the warm accolades and praise from all the featured guests.

“When I hear that stuff, it makes me realize what I didn’t realize, probably.”

What a blessing he was to us all…