Over the past couple of days we’ve provided content regarding the Ravens salary cap picture courtesy of RSR’s Brian McFarland, complemented by the insider perspective of The Athletic’s Jeff Zrebiec. We’ll continue to stay on top of the developing situation in order to help clarify what is always a convoluted topic for fans.

Yesterday’s article and podcast made it clear that the Ravens are currently $7.2 million under the cap. Keep in mind that the situation is fluid and can quickly change with roster and contract augmentation. That said, I want to give a visual of some of the potential moves the Ravens could make (which in some cases require player/agent participation) in order to help simplify all that was discussed.

The chart below list several players, the disposition of which could create additional cap space. Agree or disagree, a Lamar Jackson extension seems like a foregone conclusion. His $23M cap number in 2022 can drop to $10M with a market value extension. Alejandro Villanueva’s release seems like a foregone conclusion based on post-game discussions and behaviors as explained by Jeff in the podcast. Boykin is an easy one, an inflated cap number triggered by playing time incentives.

After that, each of the suggested moves listed are possibilities, yet each carry influencing factors:

• Might the Ravens part ways ($5.85M cap savings) completely with Tavon Young or might he agree to a pay cut ($3M savings, est.)?
• After such a bad season in the Ravens secondary devoid of big plays, would the Ravens still be willing to part ways with Marcus Peters ($10M savings) or might they extend ($5M savings or more) the 29-year old coming off knee surgery?
• Would the Ravens convert salary to bonus and restructure ($6.35M) Ronnie Stanley?
• Same as Stanley for Marlon Humphrey ($7.17M)

Brian is planning a follow up article that we’ll post next week which will explain why not all of the cap space created can actually be used on new player contracts. There are some other important factors to keep in mind such as a rainy day fund for injuries. And as we learned in 2021, such a fund is crucial in order for an injury-plagued team to remain competitive.

WBAL’s Bobby Trosset had Brian McFarland on as his guest for a live broadcast which can now be found on YouTube, Facebook and Twitter. Feel free to watch below…

It would appear that this Sunday Night will be Ben Roethlisberger’s last game if all goes as most expect and Ben actually retires, although I have my doubts. We’ve seen this movie before. The Steelers are prohibitive underdogs (12 ½ points).

The Steelers are the Ravens arch-rival and sometime nemesis. And as Ravens fans, we regularly root against Pittsburgh. But count me among those who wouldn’t mind an upset on Sunday Night – not because I’ve suddenly softened on the rivalry. It has more to do with my disdain for the Kansas City Chiefs. I’m not a Patrick Mahomes fan. I’m not a Travis Kelce fan. I’m not a Tyreek Hill fan. I’m not a Frank Clark fan. I’m not a Tyrann Mathieu fan. I’m not even an Andy Reid fan. I think Reid’s nice guy persona and his status in the world have allowed the Chiefs to sweep the dastardly deeds of Andy’s son under the carpet.

We all know that sometimes players receive coveted accolades and awards based solely on reputation and not fairness. Such is the case with Travis Kelce and his post season attaboys.

It’s not that Kelce had a bad season. He had an excellent season. But let’s be honest, the way opponents defend the Chiefs these days, with safeties positioning themselves so far off the line of scrimmage in order to mitigate the damage that Tyreek Hill can inflict, that they’re often in a different zip code. That certainly opens things up for Kelce. And let’s keep in mind that his quarterback is Mahomes and that the Chiefs field other speed demons who help to spread the field.

The All Pro, All-World, All-Universe tight end in 2021 is Mark Andrews and a vote for anyone else is just flat out lazy.

Oh, and by the way, how smart does Eric DeCosta look now by getting a contract for Andrews done before his monster season played out? 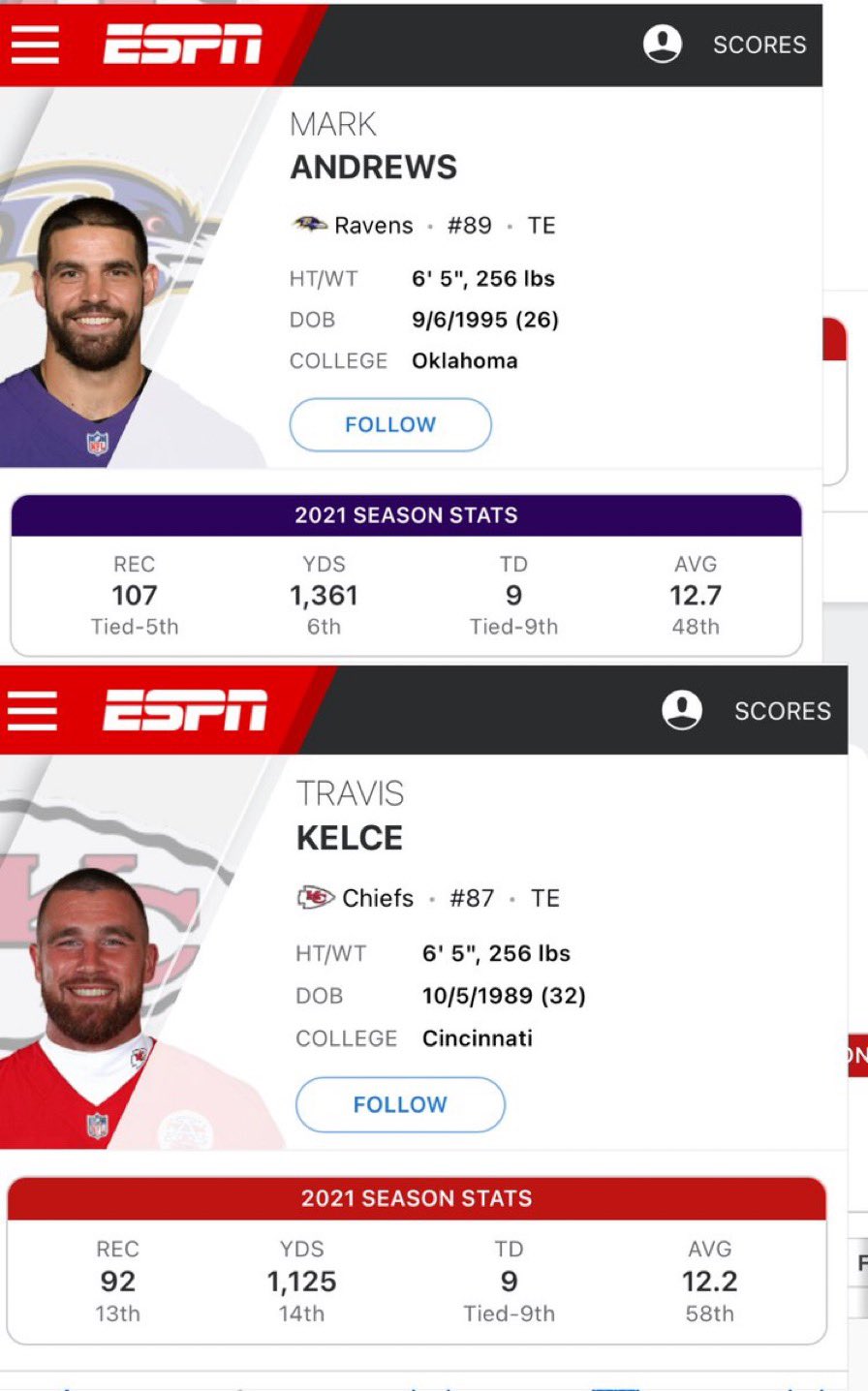 Mark Andrews is THE TE1 🥇 pic.twitter.com/fbs5oUhzhv

21 years ago today, Shannon Sharpe took a Trent Dilfer pass to the end zone for a 96-yard touchdown to put the Ravens up early over the Raiders in the AFC Championship

Baltimore would win the game 16-3 and advance to their first Super Bowl pic.twitter.com/j4hLn7lLdE

Meanwhile, the #Ravens got a third-round compensatory pick last year and still get another third-round comp pick in 2022 for Culley, even though he's already out in Houston. https://t.co/9rVqJSABCU

The Ravens have signed defensive tackle Isaiah Mack to a reserve-future deal, per today’s transaction sheet. As a COVID-19 replacement, he was one of the few bright spots in the Week 16 loss at Cincinnati.