The Candor of Steve Bisciotti

Over the years I’ve had the opportunity to sit-down with Ravens owner Steve Bisciotti on several occasions, thanks to a mutual friend, Steve Pappas, owner of The Original Greene Turtle in Ocean City, MD. As I’ve said in the past and it bears repeating, Bisciotti is not only candid, he also possesses a unique way of communicating. His vision oftentimes lies outside the box. His ability to assess a situation is abnormal. If Steve was a player on the field, you’d grade him as one with off-the-chart instincts complemented by an uncommon processor that heightens his diagnostic speed.

During our sit-downs, particularly those during our first few meetings, Bisciotti would answer a question and he might temporarily lose me. For a moment, I might wonder if he forgot what the question was – or so I thought. What I learned was that many of Bisciotti’s responses were like journeys. He graciously took the time to paint a picture words, to provide the background, to bring you to his position so that you might see things through his eyes on any given topic. And to get to that vantage point, the background was needed to guide his audience along.

I thought back to those conversations when I read what he shared with members of the Ravens media yesterday down at The Breakers in Palm Beach, Florida.

On extending John Harbaugh through 2025…

“No interest in having him go lame duck on me here. It’s not fair to him. I think John’s grown and grown and grown. It’s kind of interesting. I don’t feel like I’m just signing up the same guy. I think that’s really a compliment to him. I really feel like there’s a rebirth in John as the years go on. Things that mattered to him don’t matter as much anymore.”

On rationalizing the outcome of the 2021 season…

“I was really good emotionally with it, because I kind of didn’t think we necessarily deserved to be 8-3. I thought we had gotten very fortunate. I didn’t have real high hopes of a playoff run when you’re that depleted. I wanted it for John more than me, because he’s in there, grinding this out, trying to make them believe they’ve still got enough weapons to fight that war. My admiration for them, the players and the coaches, was just so high. It was hard to be depressed when your pride level is high. You recognize the reality of that situation. It was like, ‘Oh, well, we’ll take what we get.’ And then when the season is over, it’s like, ‘Oh, we get the 14th pick in the draft. That’s kind of nice. We don’t get many of them.’”

All was not lost, despite a losing season. Vital lessons were learned while new and unexpected challenges were thrust upon the organization. Those experiences didn’t pay dividends as they happened, but they could as the team moves forward, together, in 2022. 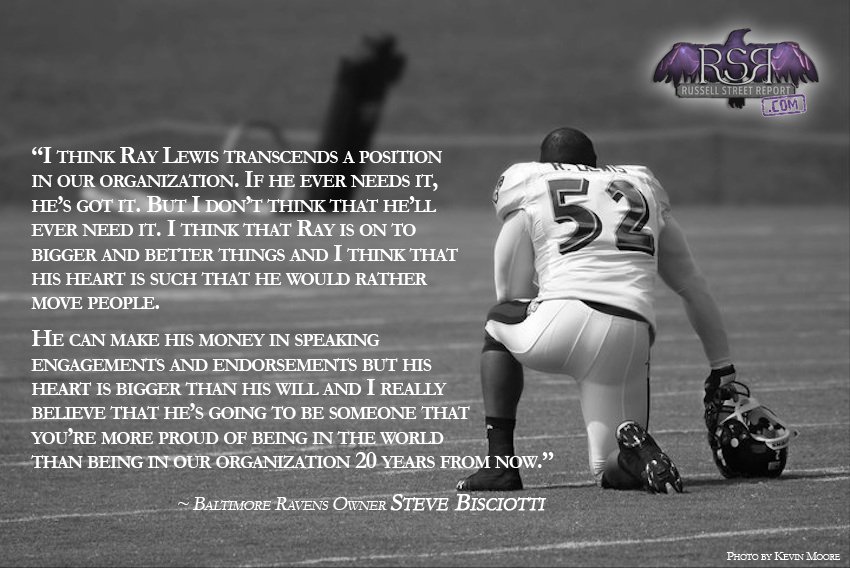 On if he expects a Lamar Jackson extension this offseason…

“Unless [Lamar] has a change of heart and calls [general manager Eric DeCosta] and says I’m ready. But it’s like, Eric can’t keep calling him and say, ‘Hey Lamar, you really need to get in here and get this thing done.’ That’s not a GM’s job.”

The Ravens recognize the worth of agent relationships. Such relationships carry value and they aren’t just transactional values. The best agents represent several clients and one, even some of those clients might also be of interest to the team. Consequently, the sides foster a cooperative spirit based upon an understanding of the wants and desires on both sides of the table. It sets the stage for more productive discussions on new topics stemming from past experiences.

Lamar isn’t represented and therefore the art of the deal, so to speak, is lost. Generally accepted business practices aren’t employed by both sides. Instead, one side has to practically teach the side without representation. But the education doesn’t happen without communication and for now, that is apparently Lamar’s preference. It’s not EDC’s job to change it or teach it.

On why there isn’t two-way communication with Lamar…

“Everybody expects you to say, ‘I’ve got to get mine now. The kid is so obsessed with winning a Super Bowl that I think, deep down, he doesn’t think he’s worthy. I think he wants that to say, ‘Now, I deserve to be on top.’ People can speculate any way they want. I don’t think he is turned on by money that much and he knows it’s coming one way or the other.”

From the Miami game in 2021 forward, Lamar looked out of sorts. The joy that was so common during his prior seasons with the team seemed to vaporize and drift away with the wind. It never returned. By his own admission, at least once during the campaign, Lamar, “played like a rookie”. Jackson is humble, yet he’s proud and when those two traits collide, you get what Bisciotti describes above. Lamar wants to prove to the world that he’s capable of a championship and wants that to be the basis upon which contract discussions begin. Not the mess that finished the 2021 season.

Steve Bisciotti on Lamar: “He's a unique cat. What are you going to do w/a guy who wants to be unique? You don’t browbeat him into being a conformist. We appreciate him. All I know is his teammates freaking love him and the front office loves him. It’s like, keep doing you Lamar.

“Acknowledging that it could have an impact is different than me worrying about it, because my competitors have always done things differently than us, you know what I mean? You have to stake out your way, and we don’t change because of that. … It’s like, ‘Damn, I wish they hadn’t guaranteed the whole contract.’ I don’t know that [Watson] should’ve been the first guy to get a fully guaranteed contract. To me, that’s something that is groundbreaking, and it’ll make negotiations harder with others. But it doesn’t necessarily mean that we have to play that game, you know? We shall see.”

“We shall see” is right!

Do you compound the errors of a franchise (Cleveland) that has a long history of broken glass and careers blown to smithereens by imitating it? Replicating a horrific deal?  In a league where the last contract becomes the starting point for future contracts when assessing comparable players, this albatross contract could be a huge sticking point that becomes the major obstacle in Lamar landing that elusive long-term deal in Baltimore.

On Bisciotti’s future as an owner…

“I’m not going anywhere. I like it enough. It’s a good family deal. Right now, I’m really happy with it.”

“Right now” jumps off the page at me and takes me back to a question I asked Bisciotti during the summer of 2015 as we prepared to do our 20 for 20 series to celebrate the Ravens 20th season.

My question: Looking ahead to the next 20 years, what can fans expect from you in terms of how you manage the team? When we sit down to discuss a 40 for 40 what might we be talking about?

“That’s a good question Tony. I’ve always left that open for me. I don’t know that I’ll be the owner 20 years from now. It does take a lot out of you and I don’t know that I’m here when I’m 75. I really like to focus on, and right now it’s like I’d hire John Harbaugh again tomorrow. So I don’t know. I’d like to talk about the next 10 years.

I want Ozzie to stay as long as he wants. I think it’s well documented that Eric is happy and patient – God bless him, to wait to take over for Ozzie. So I’m kind of looking at Ozzie, Joe [Flacco] and John being secure here for the next 8 or 10 years.

So I’m really happy to be sitting here and saying that I don’t have major upheaval in my future. I think it’s pretty cool if we can win a couple more and we’re 8 years out and there’s still the same guys sitting on that stage when it comes to the quarterback, head coach and the GM.”

Time has a way of changing things, for sure.

But as time goes on, the thoughtfulness and candor of Bisciotti’s words prevail and lead.

And that’s a good thing for the Ravens and their fans.