To Err is Human

This July 3 will mark the 19th anniversary of Russell Street Report, formerly known as Ravens247. At the very early stages of this endeavor, I took the approach of taking news about the Ravens and distilling it from the perspective of an informed fan. As time went by, the approach was the correct one, since it was pretty obvious that we would never be a source for breaking news. We simply didn’t have the bandwidth to fill such shoes.

On occasion throughout the years, we’ve landed on a few scoops that we were the first to post, but for the most part, we opted to stand by and take the lead from the team insiders and then put our own spin on it. Besides, given the virality of social media, why even try to be the news breaker. Do fans really care all that much who broke a story or do they just care more about the story?

While fans might not care, those in the media do, and that’s why you see league insiders like Adam Schefter and Ian Rapoport racing to breaks stories and in their haste to be the first, they can and do make mistakes. Schefter made one this weekend. 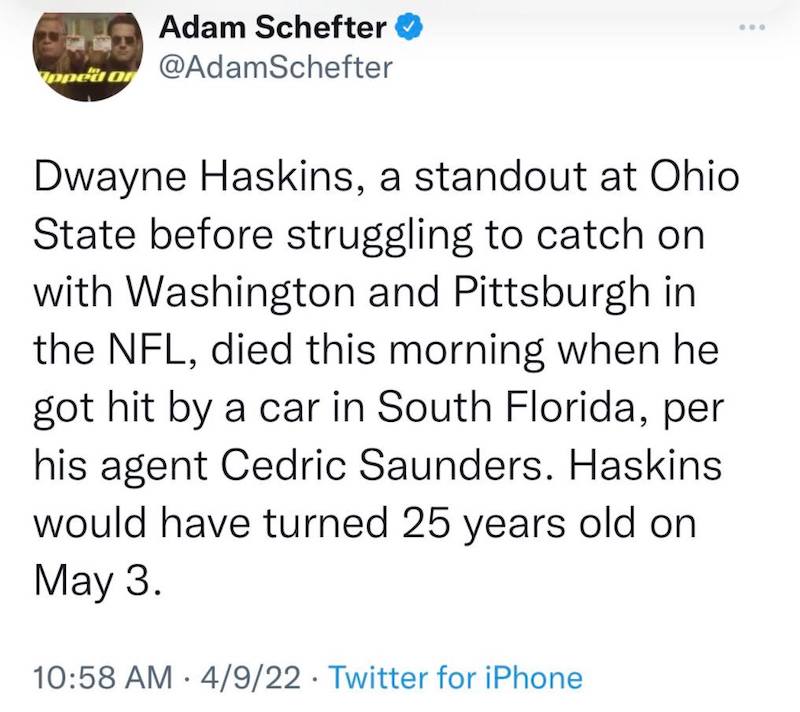 This tweet was devoid of sensitivity. A well-liked man, just 24 years old, lost his life tragically. There was absolutely no need to report the tragedy while simultaneously diminishing the legacy of Dwayne Haskins.

The backlash on social media was fast, furious and brutal. Even players dumped on Schefter.

Twenty-one minutes after his ill-advised tweet above, Schefter deleted it and replaced it with the more tactful one below. But the damage was done. The deleted Tweet coupled with an apology that didn’t arrive soon enough for most, had the cancel culturalists swirling above Schefter like buzzards hovering over fresh road kill.

I’ve never met Adam Schefter. But I know others who have and another who considers him to be a friend. What I hear is that he’s a good man, respectful, hard-working and loyal. But one can still possess those qualities and make mistakes. Schefter has made a few this year and they’ve sullied his reputation as being THE go-to source for breaking NFL news. Yesterday, he showed the humility that social media demanded.

An apology and a tribute to Dwayne Haskins. pic.twitter.com/QxjShC4ZYu

I don’t condone what Schefter tweeted in his insatiable thirst to be first. He messed up. But that Tweet shouldn’t be grounds to dismiss the good that he’s done – to cancel out his contributions as an upper-echelon insider…to sully his legacy.

Besides, my next mistake is just waiting to happen – waiting to teach a lesson I haven’t yet learned.