A Professional Parting of Ways

“The Ravens are seeking a wide receiver” seems to be an annual rite of passage for the franchise, although this time the team invited the unexpected trip when they surprised everyone on draft day, trading 2019 first-round pick Marquise Brown.

The trade seemed like a long shot and probably wouldn’t have even registered as a prop at a new online casino. But to the credit of all parties involved, the Ravens, the Cardinals, Brown and his agent, probably even Kyler Murray, Brown’s other BFF, kept a tight lid on this trade right up to the time it was consummated. That’s professionalism! And that helped to keep the Ravens’ options open.

Marquise Brown confirms he asked for the trade and talked about it multiple times with Lamar Jackson, dating back more than a year.

Said he’s proud of the way he and the Ravens handled it internally. Said offensive system (run-first) just isn’t for him.pic.twitter.com/m34mimtu9J

With the 14th-pick, now that we know this trade was in the works, the Ravens could have drafted a wide receiver. Had they done so WITHOUT public knowledge of the Brown trade, it could have been a mind-blowing experience for fans and the media. But the board didn’t fall the way the Ravens expected and consequently they drafted Kyle Hamilton, announced the trade shortly thereafter, and then doubled down in Round 1 to pick up Tyler Linderbaum.

The trade was a coup for GM Eric DeCosta. He essentially was able to get productive and relatively inexpensive labor from Brown for 3 seasons and then traded him for essentially the same amount of draft capital invested in the former Sooner, particularly when you consider the swap with the Bills from 23 to 25 that netted the Ravens a third-round pick.

Peter King used a great analogy to describe the trade.

It’s like the Ravens drove a BMW off the lot for $54K, used it for three years, then took it to a used car dealership, and were given $54K for the car. pic.twitter.com/hMPgyLwPz2

Brown now goes to a team that prioritizes throwing the football, engineered by Arizona Cardinals head coach Kliff Kingsbury. That bodes well for the receiver, should he test the market following the 2023 season. It remains to be seen whether the Cardinals will extend Brown but they did exercise his fifth-year option, which barring a trade, will be $13.413M on Arizona’s books next season.

Hollywood Brown believes he'll be able to get more one-on-ones now that he's with the Cardinals. 👀 pic.twitter.com/K2jyCJO7Zc

Parting with Brown wasn’t an easy move for DeCosta, as he explained to Garrett Downing and Ryan Mink on The Lounge:

You know I’m of the opinion, and maybe I’m just mellowing as I get older, if players really don’t want to play here, I don’t have a strong feeling for keeping them, all things being equal. I appreciated his thoughts, appreciated where he was at in his career. I told him that I would try to help him, all things being equal. But the organization needed to win, meaning that we had to make a trade that I thought was a strong trade beneficial to the Ravens.”

Brown’s departure does leave a void in the Ravens receivers’ room. His ability to stretch the field is a weapon no longer available to offensive coordinator Greg Roman and that could compress the part of the field that Mark Andrews has expertly navigated since his arrival in 2018 – particularly in 2021, an All-Pro season for the big-bodied tight end.

There has been some talk about the Ravens being in play for the services of free agent Jarvis Landry who according to Ian Rapoport, turned down a 1-year deal to return to Cleveland. Landry would provide veteran leadership and he would be an asset to a young wide receiver room. The Ravens most chiseled “veteran” WR is all of 25 years old, James Proche.

But back to Landry for a moment, the former Brown offers excellent route running; he’s effective after the catch; a willing blocker; plus he provides some gadgetry opportunities given his ability to throw the football – a lefty nonetheless. But Landry doesn’t possess the ability to take the top off a defense like Marquise did and I have some concern about whether his skill set is complementary or just redundant, particularly if the Ravens have to pay him handsomely. The team’s limited cap resources would be better invested in an edge rusher.

Jadeveon Clowney, come on down!

I’ve seen some friendly debates on Twitter about the services of Will Fuller. The speedster and former Golden Domer has yet to play a 16-game (now 17) schedule during his six seasons in the bigs. He played in just 2 games in 2021 and a total of 55 of a potential 97 regular season games (57%) throughout his career. Unless Fuller is willing to take an incentive-laden deal with very little to no guaranteed money, he’s a hard pass for me.

And then consider this…

It doesn’t take much imagination to see Clark reunited with former defensive coordinator Wink Martindale in the Big Apple. A swap of Clark for Slayton seems to make sense for both teams and for the players. According to RSR’s Brian McFarland, if the Ravens make such a trade post June 1, they would realize $2.5M in cap savings by trading Clark and pick up Slayton’s salary of $2.54M – essentially a wash.

This deal makes sense and it preserves the Ravens cap integrity to potentially go after someone like Clowney. Of course they might have to restructure a player or two, the most likely candidates being Marlon Humphrey and Kevin Zeitler.

Just seems that many lose sight of the fact that the offseason is a complete body of work. It’s only May 10! The meal isn’t yet totally prepared, something that escapes the cerebral cortex of the alleged “insider” on @1057TheFan.

While the entire free world dishes out A to A+ grades to the Ravens for their 2022 Draft Day prowess, leave it to 105.7 The Fan’s Inside Access (ha-ha…that’s funny) to throw shade on the Ravens, led by CBS’ Jason LaCanfora. You have to wonder what the suits at CBS think about LaCanfora’s inability to get an inside scoop from his hometown team, just miles away, much less any useful information from the other 31 clubs. The only thing this guy scoops is ice cream.

Word is CBS is either considering an alternative to the Baltimore-native or an addition to their insider’s staff.

The Ravens front office is really, really good at this. I won’t apologize for stanning! pic.twitter.com/wuddKw63lg

We all share a passion when it comes to the NFL. In part, that’s why you are here. But sometimes, we overlook the fact that the players and coaches have real lives, real families and real losses. Recently, Ravens offensive line coach Joe D’Alessandris lost his wife Toni after a seven year fight against MSA-P, a rare form of Parkinson’s disease. Toni was 67.

As is the Ravens organizational way, they treated the loss with their customary grace and style. 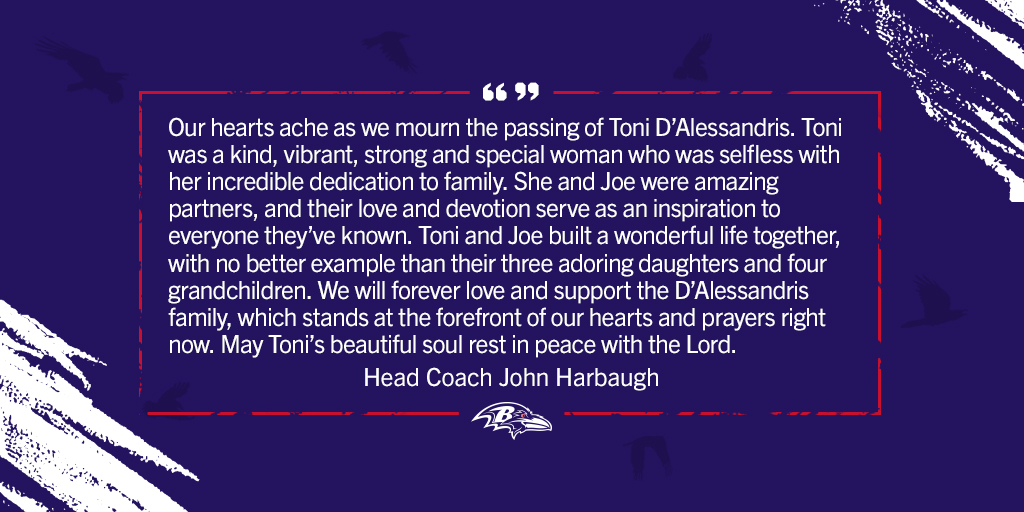 On behalf of all of us at RSR, we would like to extend our deepest condolences to the D’Alessandris Family. We hope that Toni’s zest for life, passion for sports and devotion to family resonate well beyond her years on this planet. And most importantly we hope your memories and love provide you comfort during a difficult time.