Ravens Left Out at Wide Out

Count me among those who aren’t upset by Jarvis Landry opting to play for the Saints instead of the Ravens. Landry is a classy veteran who isn’t afraid to do the dirty work. He’s a chain-mover with great hands and possesses outstanding route running skills. His experience and durability would have been a welcomed addition to the Ravens receiver room. But his skill set isn’t necessarily complementary. The tools that Landry provides are a bit redundant for the Ravens and his presence would have slowed the development of the other members of the receiving corps.

The #Saints gave WR Jarvis Landry a 1-year deal with a base value of $3M, source said. He can earn another $3M in incentives, mostly based on individual stats. A good value option for New Orleans, while Landry gets his 1-year deal that allows him to get paid again if he produces.

Was it a loss? Perhaps, a minor one. But the Ravens do have a young talent at the position who if given the chance, could be a reliable option for Lamar Jackson. His name?

Proche possesses receiver traits very similar to those of Landry. They are the same size. They make contested catches. They each possess a nose for the sticks. And…Proche is actually a bit faster, clocking a 40-time of 4.62 v. Landry and his 4.77. Sometimes a player just needs a chance and from the looks of it, Proche will finally get his.

That said, there has to be some concern on the parts of John Harbaugh and Eric DeCosta, respectively, about the depth of the receiving corps after trading Marquise Brown, losing Sammy Watkins to free agency and releasing 2019 3rd-round pick Miles Boykin. Only Rashod Bateman (46), Devin Duvernay (53), Proche (17) and Tylan Wallace (2) have caught balls in the NFL – combined, just 11 more than Mark Andrews had in 2021.

One injury to any of those four and the depth (or lack thereof) becomes a bit frightening.

So where does that leave the Ravens and the long-time problematic position of wide receiver? Should there be concerns about free agents such as Juju Smith-Schuster, T.Y. Hilton and Landry avoiding the Ravens? Is that an indictment on Lamar Jackson, Greg Roman, John Harbaugh or all of the above? Let’s be honest, Charm City is where receivers’ careers often go to die. Even Brown, who had 91 catches, 1,008 yards and 6 TDs during a season that was destroyed by injuries, practically begged DeCosta to let him go and leave his best friend behind.

Of the free agent wideouts the Ravens could sign, practically every single one is injury prone, long-in-the-tooth or both. Hilton missed seven games last season and caught just 23 passes. Will Fuller hasn’t played in more than 11 games since his rookie season (2016) and missed 15 games in 2021. Julio Jones, 33, missed 7 games in each of the past two seasons.

The Ravens should sign Will Fuller, Julio Jones, and DeSean Jackson and hope they get a combined full season between the three 😅

There’s also Odell Beckham, Jr. who will not be available until November given his ACL tear in the Super Bowl; 35-year-old Emmanuel Sanders who caught 42 balls for 626 yards from Josh Allen; 35-year-old DeSean Jackson who was on the receiving end of 20 passes for two teams in 2021 but played in just 6 games combined from 2019 to 2020; John Ross, the ninth overall pick from the 2017 NFL Draft, is available for some team hoping that he can dress a bit more regularly on Sundays. Ross has played in just 21 of a possible 49 games over the past 3 seasons.

It is just May. A lot can happen between now and September but make no mistake about it, assistant coaches Keith Williams and Tee Martin must be a bit restless these days.

Like Marquise Brown before him, Chuck Clark has scrubbed mentions of the Baltimore Ravens from his social media feeds. The Ravens defensive captain is said to be not-to-pleased about the team’s offseason acquisitions of Marcus Williams and first-round pick Kyle Hamilton. There’s a good chance that defensive coordinator Mike Macdonald can work Clark into his sub-packages and perhaps even start Clark at times. But there’s little doubt that Clark’s reps will diminish. And given the promise of the potential of a Williams-Hamilton tandem, the developing Brandon Stephens and Geno Stone plus the veteran Tony Jefferson who played very well late last season, Clark is expendable and is unlikely to be part of the team in 2023, the last year of his current contract that is scheduled to pay him $3.285M. 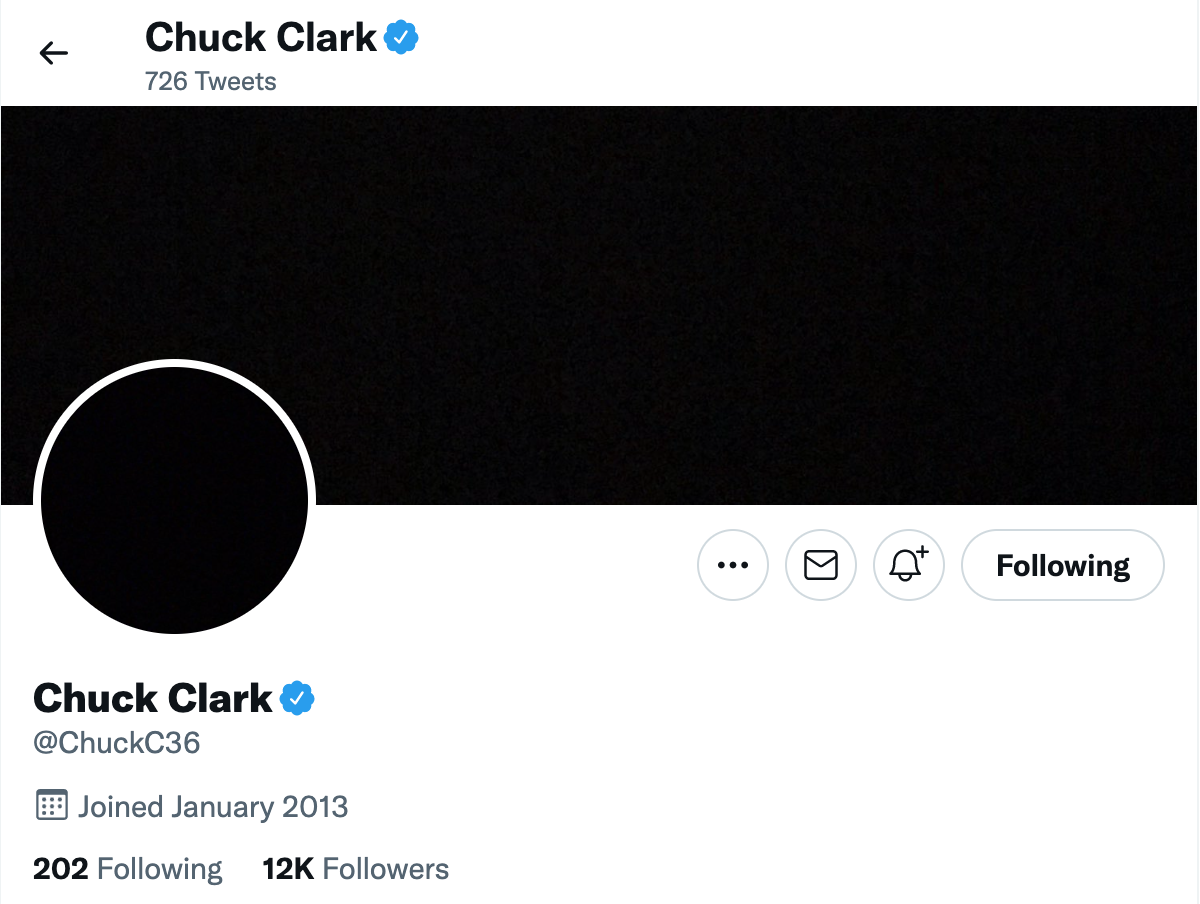 Players who are part of the team and begin to express displeasure with their current situations, have found their respective way out of Baltimore. The list includes Hayden Hurst, Orlando Brown, Jr. and Marquise. Could Clark be next? DeCosta shared his opinion on the delicate topic following the trade of Brown.

“You know I’m of the opinion, and maybe I’m just mellowing as I get older, if players really don’t want to play here, I don’t have a strong feeling for keeping them, all things being equal. I appreciated his thoughts, appreciated where he was at in his career. I told him that I would try to help him, all things being equal. But the organization needed to win, meaning that we had to make a trade that I thought was a strong trade beneficial to the Ravens.”

The Giants and Wink Martindale would be a great landing spot for Clark. The question remains, what do the G-Men have and would be willing to relinquish to complete such a “strong trade beneficial to the Ravens”.

RSR's @RavensSalaryCap & @RSRLombardi cover several #Ravens topics and potential roster moves. They also explain why the team CANNOT make any moves of significance unless EDC & Co. do some restructuring…STAT!https://t.co/dNWMvqXZMZ

Two veteran edge defenders received the rare unrestricted free agent tender this offseason. The Chiefs offered Melvin Ingram such a tender while the Ravens did the same for Justin Houston. In 2021 Ingram agreed to a 1-year, $4M deal and by virtue of the Chiefs’ UFA tender, they were willing to pay $4.4M, 110% of his 2021 pay. Ingram reportedly agreed to a 1-year, $5M deal with the Dolphins which the Chiefs had the opportunity to match, but instead took a pass.

You may recall back in 2018 Gus Edwards was elevated to starter, replacing Alex Collins. Edwards north-south style was deemed to be a better fit for the Ravens offense when the keys to Marty Mornhinweg’s offense were handed over to Lamar Jackson following Joe Flacco’s hip injury. The move was a smart one and since, when healthy, Edwards has been a very effective runner in the Jackson-led attack.

Last season, the Ravens were caught short-handed when they suffered late camp injuries to Edwards and backfield mate J.K. Dobbins. The Ravens personnel group were then forced to dive into the scrap heap of running backs that included Devonta Freeman, Le’Veon Bell and Latavius Murray. Given the uncertain recoveries for the team’s one-two backfield punch, the Ravens brought in another back whose style, like Edwards’, is a solid fit for the offense.

Mike Davis was given the Veteran Salary Benefit (VSB) which is essentially a 1-year deal with the applicable minimum salary (based on the player’s service time) and a small signing bonus ($152,500 in 2022). But for cap purposes the team only has to count Davis’ salary at the level of a player with only 2 years of service time (plus the bonus).

So, given the Rule of 51, Davis will add just $152,500 to the Ravens cap. Not a bad move to avoid sifting through said scrap heap if Edwards and/or Dobbins are slow in their recoveries. Last season Davis rushed for 503 yards and three touchdowns for the Atlanta Falcons.

Besides the offensive backfield, the Ravens are counting on their defensive backfield to bounce back from key injuries – specifically those suffered by Marlon Humphrey and Marcus Peters. Yesterday, Jeff Zrebiec from The Athletic posted an interview with Peters during which Jeff asked how Marcus’ recovery was coming along and when he might return to the field.

“I ain’t even going to lie. Putting a timeframe is always going to be just people’s words and shit like that. When Marcus is ready to be on the field playing ball, I’m going to be.”

I always chuckle when players or celebrities refer to themselves by name or in the third-person.

Jeff later asked Peters about a possible contract extension, something that could trigger about $4-7M in cap space for the team, depending on the structure.

“I’m going to just say this. I wouldn’t want to go anywhere else. I feel comfortable being here. If some things get worked out, then they get worked out. But as of right now, I’m in the last year of my deal. I’m here to get my leg better and just play ball at the highest level I can play ball at. The rest of the shit will take care of itself.”

But can he play wide receiver?