A Wolfe in Black Sheep’s Clothing

When Derek Wolfe seemingly struggled early on during the 2020 season, the word “bust” seemed to be a popular description of the free agent defensive tackle signing across the Twitter universe. Fans were hardly enamored. I didn’t join in on the criticisms. During reviews in my Good, Bad & Ugly, I saw things that were positive and as the 2020 season reached its midway point, things began to click for Wolfe in the Don “Wink” Martindale scheme. Then, I hoped he and the Ravens could work out an extension following the 1-year rental they agreed to in March 2020. And to the Ravens delight the two sides did exactly that in March of 2021 when Wolfe signed a three-year extension.

Today, the Ravens are suffering from buyer’s remorse.

After signing his three-year extension with the Ravens, Wolfe wasn’t happy. He blamed COVID and its impact on the salary cap for limiting his market potential. After signing the extension he shared:

“I had an injury last year, so teams couldn’t bring me in and see if I was doing all right. This year, they screwed us with the cap. It’s just the way it is.”

And now he’s screwing the Ravens.

Wolfe hasn’t played a down of football for the Ravens since the team’s 17-3 loss to the Buffalo Bills in the Divisional Playoff Game held in Orchard Park, NY on January 16, 2021. During training camp in 2021, Wolfe was about as active as the 50-gallon trash cans the team uses for props during 7-on-7 drills. He eventually gave it a go during joint practice sessions with the Carolina Panthers in Spartanburg, SC but shortly after declared that he was unable to practice.

Sitting out camp and preseason games morphed into the Injured Reserve list. Then when he was scheduled to return from IR, Wolfe decided that he couldn’t play. When asked about whether or not Wolfe would be available to the team after his IR stint, John Harbaugh shared:

“I think Derek’s going to be out for the rest of the year, in all honesty. It looks that way. I don’t really have any details on it. I can’t say I understand it completely.”

Harbaugh was trying to be politically correct, but what he probably meant to say was (obviously I’m paraphrasing):

“We’ve done everything we can for Derek. We’ve had him evaluated and tested by every hip and back specialist our medical staff is connected to and no one can understand the problem. We let him go back to his home in Denver to rehab on his own. We never made a stink when we heard that he was regularly hunting but not practicing. Instead of a three-point stance, he was in a tree stand in Colorado or Wyoming.”

Entering the 2022 season, Wolfe’s $2M salary is fully guaranteed so if the team opts to cut him, the cap charge for Wolfe will be $3.8M (the $2M salary plus the amortized amount of his signing bonus). In other words, there are no cap savings. However, if the Ravens can find a trade partner for Wolfe, the Ravens could save $2M in cap space. But Wolfe’s decision to get a second hip surgery to “try and live a normal life” just dealt a death blow to any trade possibilities which even before the second hip surgery, would have taken an act of Houdini by Eric DeCosta to unload a 32-year-old defensive lineman coming off hip surgery – one scheduled to make $2M and one exhibiting very little motivation for anything other than money and hunting.

Check out this sequence of social media posts and be sure to hit the advance arrow with Wolfe’s Instagram post.

Good luck to all the rookies out there hoping to make their dreams come true over these next few days. And if you don’t get picked in the @NFLDraft let that fuel your fire. 1st round or Free agent, everything is earned in this league.

We have designated DE Derek Wolfe for return, allowing him to practice Tuesday. pic.twitter.com/vRXxBXhcHp

On the mend, hip surgery was a success. pic.twitter.com/8xHAPNGYJn

Here’s #Ravens DE Derek Wolfe in Wyoming with a 300-pound collared black bear on his back. Rehab looks to be going well. 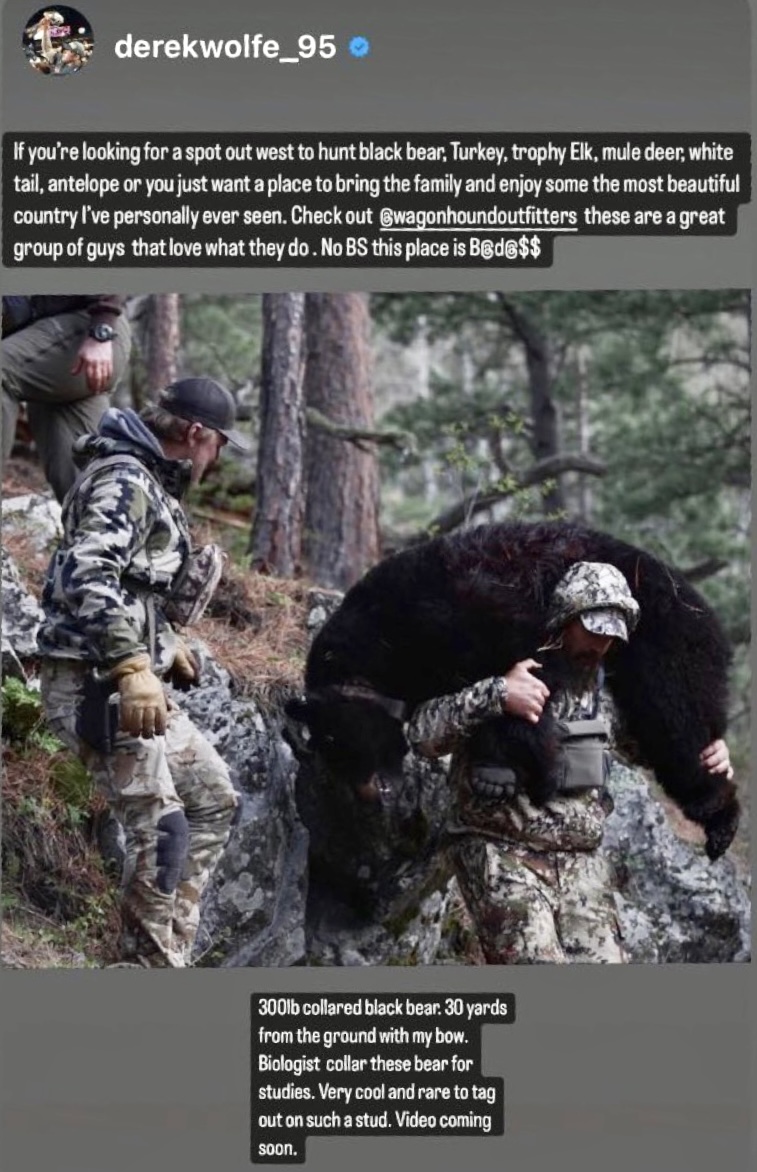 Guess who stopped by #DenverFireDepartment Station #23 yesterday? Former @Broncos & current @Ravens defensive end @Derek_Wolfe95! Crews showed Derek our gear & equipment, & even recruited him to come back to @CityofDenver & 'play' for the #DFD! Thanks for the nice surprise Derek! pic.twitter.com/f3CgxWqWDV

More from Derek Wolfe: He said he’s hoping for a “full recovery” and looking to “live a normal life.”

I must admit that I really thought Derek Wolfe embodied the qualities of what it means to Play Like a Raven…to put in the work; embrace the grind; play smart; play tough; play fast; to be relentless. Obviously Wolfe is not the man I thought he was. He’s not the man the Ravens thought he was.

The sooner “former Raven” rests beside his name the better.

It’s time for Wolfe to begin his next career as a game warden or taxidermist.

Hasn’t he ripped out enough hearts?

UPDATE: As of 4PM EST

Harbaugh said they’ve reached an injury settlement with Derek Wolfe. So he’s no longer with team.