When the Ravens signed Michael Pierce to a 3-year, $16.5M deal back in March, I was hardly impressed. My opinion of Pierce was tainted by his last year in Baltimore. Heading into a contract season, the behemoth defensive tackle reported to camp so grossly overweight that John Harbaugh had to ask him to leave the practice field. It raised concerns about his work ethic and I hoped that 2019 would be Pierce’s last in Charm City.

My wish came true, as Pierce signed a 3-year, $27M deal with Minnesota in 2020. He played exactly 8 games for the Vikings (opting out of 2020 due to COVID) before they cut him loose.

Now I get that the Ravens wanted to re-tool their defense in 2022. I get that they wanted to push the pocket a bit more than they have in order to help the edge defenders get home. I was even ok with giving Pierce a prove-it veteran deal to return. But $16.5M, $6.75M of which is fully guaranteed? Look I trust the Ravens organization and I have the utmost confidence in GM Eric DeCosta – but C’MON MAN! 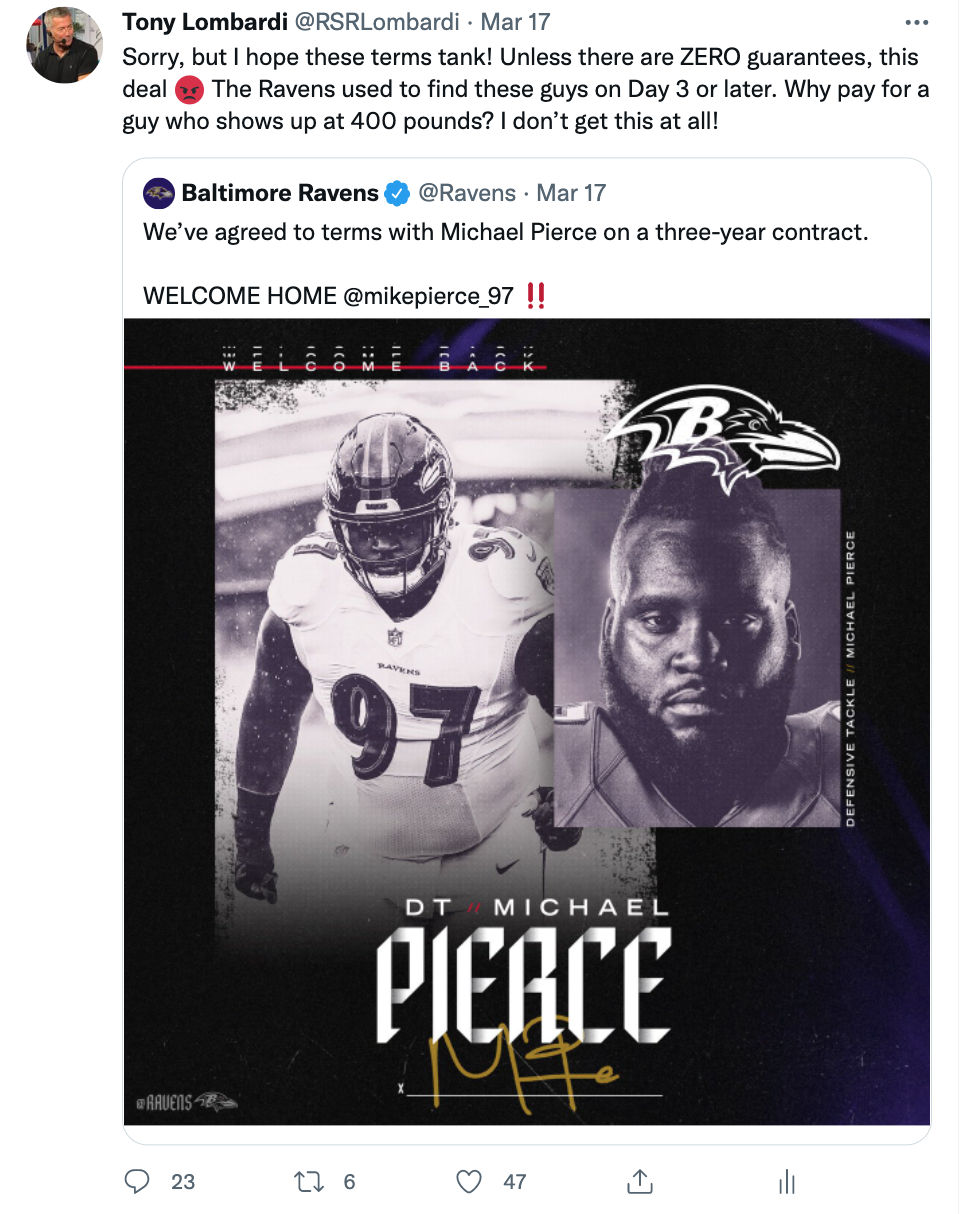 I listened as other football minds that I respect talked me down from the ledge. But even their learned words of wisdom couldn’t completely convince me. I need to see why the signing makes sense for myself and I welcome the opportunity to be proven wrong.

Pierce was a no-show for this offseason’s OTA’s. Ok, I get he’s familiar with the organization and some of the coaching staff and that the practices were voluntary, but I harbored concerns about his conditioning. Was he hiding? I hoped to see a picture of a relatively svelte Pierce on Twitter holding up today’s newspaper to prove the photo was current.

Yesterday kicked off the start of mandatory mini-camp and just as I feared, Pierce was once again a no-show. When asked why Pierce was absent, Coach Harbaugh replied:

“I can’t give you any details. I can tell you it’s a personal matter, [and] we understand his situation. It’s something that kind of is what it is, and that’s where it stands.”

If this had been a personal matter involving Michael’s health or the health of a Pierce family member, the heartfelt Harbaugh would have more eloquently stated his concerns. But, “It’s something that kind of is what it is” is disturbing.

Not long after being questioned about Pierce, Harbaugh spoke glowingly about the development of the team’s young defensive linemen:

“They’re doing well. The young defensive line … I really like those guys. I’m going to tell you; Broderick Washington is really stepping up – just to throw a name out there at you. He played well last year, and he’s only getting better every single day. Of course, Travis [Jones] is a young guy; he looks good. There are some guys in there that are … They’re going to be a couple surprise guys in there, too, [with] the D-line. I think the D-line is going to be really good.”

At the end of the day, Michael Pierce, the man, is the biggest concern. I certainly hope for his wellness. But that said, if for some reason Pierce never suits up again, the Ravens can void his guaranteed salary and pursue bonus forfeiture to get the bonus money back. And then of course there would be a salary cap benefit to such maneuvering.

Is it possible that I’m overreacting and reading into this too much?

But, where there’s smoke, well, you know the rest.