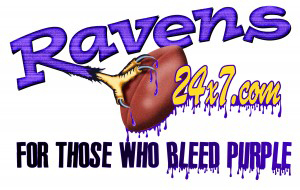 During the Summer of 2002 while in Ocean City, Maryland, one Ravens fan bought a copy of The Baltimore Sun hoping to catch up on the latest at training camp.

The fan searched the sports section from cover to cover – not a word about the Baltimore Ravens! Completely frustrated and feeling out of touch, this fan decided to take matters into his own hands and deliver Ravens insights and opinions through the eyes of a fan for fans. It was then, literally born on a napkin in a seaside diner, that Tony Lombardi created the concept for what would become Ravens24x7.com.

The following summer the site launched on July 3, 2003.

Those accolades aside, perhaps the crowning achievement of the site is that it never has lost sight of what it is – a fan website. At least that’s what Mr. Lombardi would have you believe.

“The awards are nice and we’re honored by them but they don’t motivate us. Our customers and site visitors do!”

And in the spirit of rewarding site visitors, Lombardi is very clear on 24×7’s mission.

“We don’t aspire to be a news breaking entity. The value of that has diminished significantly with the advent of the internet, social media and hand held devices that deliver such news instantaneously. What we’ve chosen to do is take the news, distill it and then opine on it from the perspective of an intelligent fan.”

When you are a fan it’s a bit easier to understand what fans want and Ravens24x7.com’s 48% annual growth since its inception suggests that they are dialed in to their audience.

“Some of our competitors dismiss us claiming that we aren’t true media”, Lombardi explains. “I’m really not sure what that means or even if we’re supposed to take offense to that. What I do know is that when I wake up every day there are two things on my mind when I sit down in my office: 1) What can we do today to make a visit to our site a worthy one; and 2) What can we do to provide value to our customers?”

The site’s growth is extremely impressive and companies that are looking to reach out and touch Baltimore area football fans have taken notice. So have the Baltimore Ravens.

“We have operated as Ravens24x7.com for 9 years and now the Ravens have asked us to change our name. And in order to remain in good standing with the team and help them preserve the integrity of their trademark it makes sense to accommodate the request. After countless hours of internal discussions, we changed our name to RussellStreetReport.com.”

For those who don’t know, Russell Street is the address of the Ravens home, M&T Bank Stadium. And that address is a fitting new home for the site’s web address.

“Russell Street is where it all happens”, says Lombardi. “Not only is it the team’s address on Sundays, it is also where friendships are deepened, new friendships are made and memories are born. Like 33rd Street was to generations of Colts fans, Russell Street will become legendary for future generations. And we hope to capture and preserve that through our words, pictures, videos and sense of community.

“Here’s to the future Baltimore!”