Everyone has dreams. For Craig Steichen and his son Matt, theirs’ is to visit every football stadium. When the NFL added weekly Thursday night games to the schedule this season, the Steichens decided to make their dream a reality.

Matt follows the words of wisdom from his dad; experiences are more meaningful than material things or money because they create lifelong memories. These words of wisdom combined with Matt’s dream are how All32in17 was born.

The theme of the project is “Real Heroes”, honoring Wounded Warriors.

Craig and Matt pay most expenses out of their own pockets. Corporate sponsors including Westin Hotels and Buffalo Wild Wings contributed to their project. Most NFL teams donated tickets; some included field passes.

Thursday night games made their goal easier to achieve since they can attend games in more cities.

In just two weeks they have been to five cities. They have taken the Wounded Warriors to see the New York Giants, Denver Broncos, Green Bay Packers, Carolina Panthers and Atlanta Falcons.

They will add two more cities to their journey this Sunday. First they will accompany Lance Corporal Caleb Getscher and his father William to the Redskins-Bengals game in Washington, DC. Later that day, they will head to Baltimore to take Lance Corporal Michael Martinez and his friend to the Ravens-Patriots game.

In addition to the games, they hope to take them to brunch or dinner, tailgate and a possible trip to the White House. They will also present them with thank-you letters and cards from kids in Craig and Matt’s hometown of St. Charles, Illinois.

Taking “Real Heroes” to football games makes their journey a more meaningful experience, one they won’t forget and neither will their heroes.

Craig believes the most rewarding part of the journey is seeing the reactions and smiles on the Wounded Warriors during the games. They start the day as strangers, but when it is over, Craig and Matt feel like they are best friends with the Wounded Warriors.

This experience has given Matt a new outlook on veterans and Wounded Warriors. He is more thankful of their heroics and looks up to them. It is inspiring and Matt believes that he “will end up a much better person at the end of this journey”. He wants others to learn from it and to do something for someone else they normally would not thought of doing.

When their journey is said and done, Craig and Matt do not want recognition, they simply want to raise awareness for Wounded Warriors and give them an experience that will last a lifetime.

Visit their website to follow their journey, read Warriors’ stories and see pictures of their game-day experiences.

And say hi when they visit your city and help them to honor our country’s heroes. 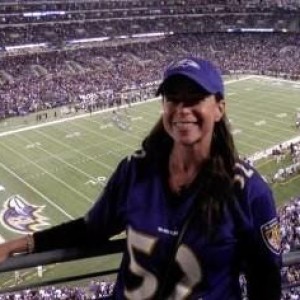 Melissa was born and bred in Baltimore and currently resides in Washington, DC. She is a self-professed sports addict and a lifelong Baltimore sports fan, her favorite team is the Ravens. Since she was young when the Colts were shipped out of town and she grew up without a football team, she became a die-hard Ravens fan and is in constant need of a football fix. In the real world she is a web/social media maven, though her dream job would be in the sports world and until the dream becomes reality, she spends her spare time writing and obsessing about her beloved Ravens. Follow Melissa on Twitter: @egoddess1