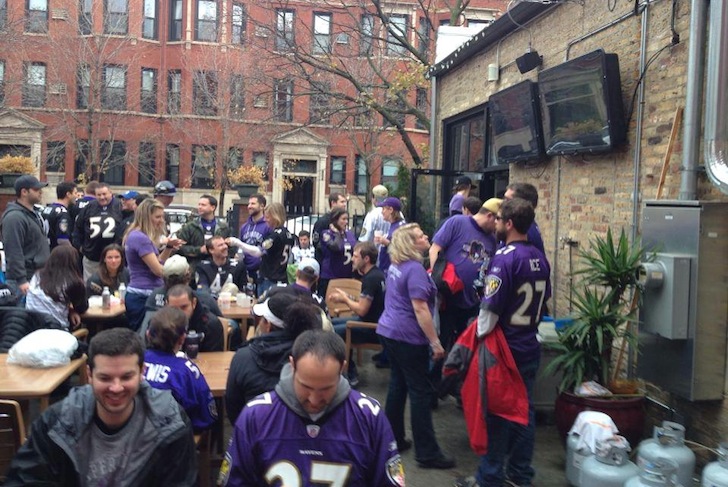 In 2003 I moved to Chicago, and quickly reconnected with some friends from High School. We’d watch games together when they were on National TV, or when I could get the bar that I worked in to put the games on one of the many TVs.

It was always a struggle!

In early November of 2011, this group and I had gotten about 15 of us together to watch Sunday Night Football game between the Steelers and the Ravens. The bar wouldn’t put the sound on.

So we ran (literally) down the street to the George Street Pub, a local bar that opened earlier that spring. I knew the owners from my bar days and they were all too happy to put the game, with sound, on for us that night.

As our cheering, pacing, fist pumping, ref-yelling night continued, they saw our passion and invited us to come back every week. They even offered to play sound for us each week if the Bears were not on.

Erin Creaney Loftus and decided then and there that it was time to make our club “official.” We made a Facebook group and our small 15 quickly grew to 20, 30, 50, 75, and now roughly 150 between the club page and the LIKE page.

There is no longer a question if there is sound – its on every Sunday, the Staff is in Purple shirts, and their Ravens flag flies high. They even help us host a Crab Feast in August to get everyone excited for the up coming season.

This year, for the Ravens vs. Bears game, we have had 3 School busses worth of Ravens fans bussed down to Soldier Field. I would get calls from home, with people laughing saying that they were going to be riding on the Bus – it was quickly discovered that it was our bus.

Needless to say, it’s been a pretty cool ride and out here, we loudly rep NEST IN THE MIDWEST!!!