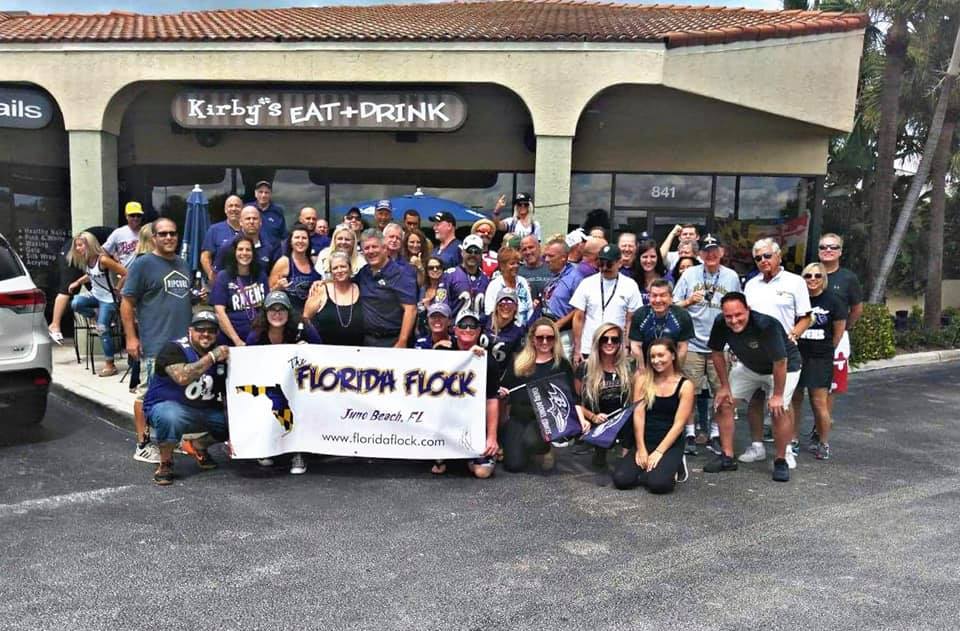 Six years ago five dedicated fans were sitting in a bar drinking beer and discussing our love for the Ravens. After a few pints we drafted an article that laid the foundation of what is now known as The Florida Flock.

Fast forward a few years, and that small group of guys has become a network of Raven friendly bars in South Florida.

Kirby’s Sports Grille located at 841 Donald Ross Rd, Juno Beach and Maguire’s’ Hill 16 at 535 N Andrews Ave, Ft. Lauderdale are the original chapters. There are also four sister Flocks in Orlando, Nature Coast, Jacksonville, and Tampa. Altogether the Florida Flocks have a few thousand followers throughout the state of Florida.

On most Sundays you can find the Flocks loyal fans tailgating in the parking lot or having a pregame BBQ on the beach at Ocean Cay Park in Jupiter. It’s not uncommon to find members playing a round of corn hole, or playing a friendly game of beer pong before kick-off.

One advantage of watching the Ravens in South Florida is the average temperature is about 80 degrees during football season. Tailgating on a beach sure beats a snow-covered parking lot in South Baltimore! The Flock members consist of mostly Maryland transplants and seasonal snowbirds of all ages. Our members hail from all areas of Maryland, so many a Bal-mer accent can be heard on Sundays.

At Kirby’s in Juno Beach, and McGuire’s Pub in Ft Lauderdale, don’t worry about small TV’s and no sound, these are true Ravens Bars, so no Steeler fans allowed. Both Florida Flock locations have incredible food and great drink specials. Kirby’s is known for

their authentic MD crab cakes, award-winning wings, and Baltimore style steamed shrimp. McGuire’s offers Irish cuisine and some of the best wings and pub fare around.

The Florida Flock is a year round club, in addition to Ravens games we also host Orioles Spring Training games, crab feasts, Toys for Tots Drive, and an annual Florida Flock road trip. So far we have been to Atlanta, Baltimore, Jacksonville, and Miami.

Last year’s Miami trip the Flock partnered with Bmore Around Town and Russell Street Report, rallying over 2000 people at our tailgate and 1000 people at our pre-party at McGuire’s. This year we are looking forward to road trips to Tampa and Miami. Details will soon be posted on our website www.floridaflock.com and on Facebook.

In my opinion one would be hard pressed to find a group of more dedicated fans outside Baltimore, so next time you’re in town put on some flip flops and shorts and watch the game with us Florida Style!