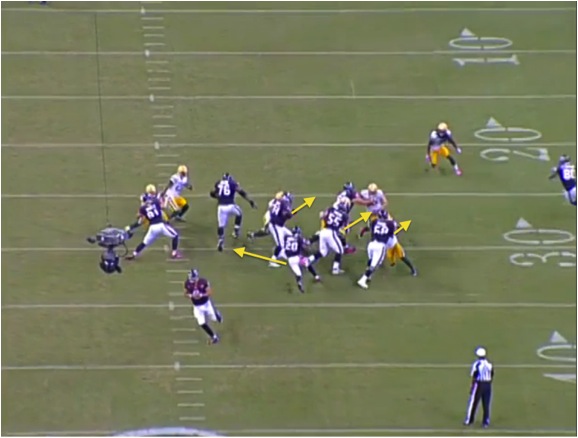 It appears that tight end Owen Daniels could have been the first of many former Gary Kubiak pupils that the coach brings with him to his new team.

After adding Daniels – someone who figures to be a valuable complementary piece in the offense next season – the Ravens added another Houston Texans member later that same day, as they signed journeyman running back Justin Forsett.

The signing didn’t make many headlines, as the team added the 28-year old on a one-year, non-guaranteed deal after an injury-plagued 2013 season in Jacksonville in which he carried the ball just six times.

The Ravens need running back help, and adding a player with Forsett’s background isn’t exactly an offense-changing move.

But will he be in the backfield once the regular season starts?

Outside of the fact adding another player with experience in Kubiak’s system would be beneficial, Forsett proved in his limited time over the past few seasons that he can still provide quality carries for an offense.

His career year came with Kubiak in 2012, when he carried the ball 63 times for 374 yards, averaging a career high 5.9 yards per carry.

Overall, in his career though, it has been a rather pedestrian five-year campaign, although his career average of 4.9 yards per carry stands out, and his play backs up the statistics.

With Houston, the positives of his game worked well for the zone blocking run scheme.

Outside of his noticeable burst (good for any scheme, obviously), Forsett’s ability to stop and cut back in one fluid step was valuable to the run game.

In a zone scheme, a valuable asset to have is the ability to follow the blocks as they all lead toward one side, and then at the right moment, cut back across the blocks and head the opposite way. Typically if a running back can’t execute the transition to the opposite side of the blocking direction in one step, it ruins chances of getting an advantage on defenders who also must change direction.

The more steps it takes to cut back, the more time defenders have to react.

For Forsett, one of his best assets is the lower leg strength he possesses that allows him to execute the cutbacks.

Here, the entire run play is sweeping toward the right side, and the Green Bay defense is reacting accordingly.

Instead of sticking to the right side of the play and following his blockers, Forsett opts to cut back, giving himself more of an open field instead of the wall in front of him on the right.

He executes his cutback before the defense reacts.

This leads to a wide-open running lane, leaving only the secondary to react.

Why is this ability valuable?

Last season, Baltimore running backs Ray Rice and Bernard Pierce typically followed the crowded part of the play, and more often than not on a play like this, they would stick to the right side, following the blocks and only gaining a few yards.

The ability to change direction in one step is a trait Forsett possesses, and one valuable to the run scheme.

The ability to come back across a play in one step was also evident in his limited chances with Jacksonville last season.

Following his blockers on the right side of the play, Forsett stays behind them long enough to let a lane open to his left.

He stops and cuts in one fluid motion, which allows him to enter the running lane before any Kansas City defenders can react to the play.

This gives him ample space up the middle as the defenders recover.

Forsett’s vision is also an asset, as he typically knows which running lane to pick early in the play.

On this play, he has three running lanes that typical running backs could decide from. The two closest to him – black and yellow – are the easiest ones to go through, but the biggest one is to the outside (orange).

Forsett isn’t anything spectacular, but he gets the job done in the short yardage game, with his good decision-making often being the difference between two or three yards and eight yards.

His leg strength is noticeable, and his ability to plant his foot and drive toward another direction is above average.

While he has a quick burst at the beginning of the play, he doesn’t have the top end speed at this point of his career to break any runs for long gains. He shed some arm tackles here and there, but isn’t a power runner who can drive through defenders.

Forsett can also provide value in the receiving game, as he has 115 career catches, though only 18 of those came in the last two seasons.

Ultimately, the draft will decide Forsett’s future with the team. On a non-guaranteed deal, it’s obvious the Ravens don’t have any solidified plans for Forsett.

While he does provide value as a runner and enters his sixth NFL season with not much wear on his tires (only 347 career carries), he still isn’t someone who can enter training camp with roster entitlement.

The working assumption for quite some time now has been that the Ravens will use a draft pick on a running back, adding another young (preferably fresh and healthy) runner to a backfield of two running backs in Rice and Pierce who both played injured and below standard last season.

If the Ravens indeed use a draft pick to add another member to the backfield, Forsett’s chances of making the roster as the third running back would take a hit.

Rice’s future also comes into play, though, as an early-season suspension is still possible, potentially opening the door for Forsett to stick around for a few weeks into the season.

For a minimal contract, the Ravens got a player who looks like he still has some juice left in his game, as well as the skill set to complement that fact.

Forsett’s 2013 season-ending foot injury should also be kept in mind, although he says he is 100%.

Bottom line: best-case scenario for Forsett, he shows enough in the preseason to earn the third running back job, and would be a bargain in that role. Worst case, he loses out to a rookie, missing out on the final roster, and the Ravens don’t face a financial burden, as there isn’t any money committed to the veteran.