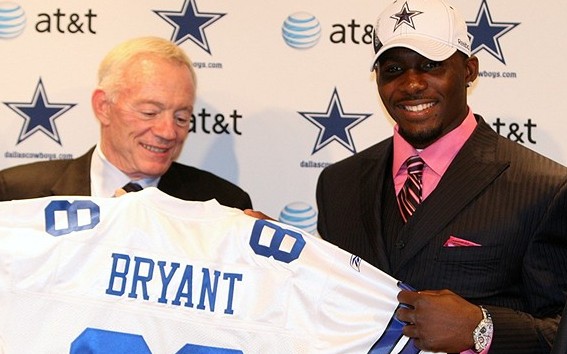 All of the recent discussions about franchised wide receivers Demaryius Thomas and Dez Bryant conjured up memories of the 2010 NFL Draft. Many hoped that either of these players would fall to the Ravens at No. 25. Count me among them.

Thomas was chosen by the Denver Broncos with the 22nd overall pick, right about where draft prognosticators expected him to go.

Bryant was a different story.

Some argued that he had Top 5 talent but the character issues would force him down the board, similar to another immensely talented wide receiver who dropped to No. 21 in the 1998 NFL Draft – Randy Moss.

With two picks standing between them and Dez Bryant the Ravens personnel brain trust watched as the Green Bay Packers selected Bryan Bulaga at No. 23.

Phone lines were burning up.

Ozzie Newsome tried to swap with a familiar trading partner, the New England Patriots, to move up one spot (No. 24) and pick Bryant. The cost: the No. 25 overall pick and 2011’s third round pick.

The Ravens believed the Patriots demands were too pricey just to move up one spot.

The third round pick in 2011 that the Ravens refused to surrender became Jah Reid. Obviously that wasn’t Reid’s fault. He didn’t literally keep Bryant out of Charm City but given the clarity of hindsight, the Ravens erred.

But what if they had made the trade with Bill Belichick?

We don’t know if Bryant would have been any more or less productive as a Raven than he has been in Dallas. Would the Ravens have won Super Bowl XLVII?

We can reasonably conclude that Torrey Smith would not have been the team’s 2011 second round pick and it’s likely that Steve Smith, Sr. never makes his way to Baltimore, perhaps instead landing in New England where he may have won his first Super Bowl ring.

Today if Bryant was a Raven he would more than likely be Ozzie’s contractual headache. Instead he’s Jerry Jones’.

The inches are all around us…

Do you wish the Ravens would have made the trade to get Dez Bryant?