The Miracle On 33rd Street

The 1975 Baltimore Colts are fondly remembered by NFL historians, veteran sportswriters, and most Baltimore football fans who are north of 40 as the first team in NFL history to go from last place one year to division champions the next. Along with that they were one of the most entertaining football teams Baltimore fans have ever witnessed.

The 1974 Colts had finished the season at 2-12 and in last place in the AFC East division. This was their third consecutive losing season. They had gone from winning the Super Bowl following the 1970 season to cellar dwellers in four short years.

General Manager Joe Thomas sold and traded off 28 players from that Super Bowl team, including legendary players such as John Unitas, John Mackey, and Tom Matte. He replaced them with draft picks, had made some trades, and grabbed players from the waiver wire. While some picks were highly touted and his drafts were considered positive by the experts, they only registered 11 wins total the previous three seasons. Thomas’ moves and the losing had Colt home attendance drop by almost 20,000 fans a game by the end of 1974 from the NFL record attendance levels they set from 1957 to 1972.

26 Nov 1976, Baltimore, Maryland, USA — Original caption: Baltimore: Colts’ quarterback Bert Jones confers with coach Ted Marchibroda as they prepare for the Nov. 28 game with the Jets. A Colts victory would clinch a playoff spot and possibly also the division title. — Image by © Bettmann/CORBIS

Thomas brought in Ted Marchibroda to be his new head coach for 1975, the former Redskins offensive coordinator got right to work. He summoned his quarterbacks, third year player Bert Jones who was regarded as a player with tremendous potential and his back up Marty Domres to meet at Marchibroda’s Virginia home for a week in May 1975 to review film and preview his offense.

Marchibroda also had one of his new assistant’s attend the film session, 23-year old Bill Belichick broke down film for Marchibroda in what was his first coaching job. This became the first unofficial offseason workout the league had seen.

While the Colts appeared to be better on paper they were predicted by the national media to finish last again in 1975. With Jones and Domres entering camp with complete knowledge of the offense, the local outlook was mildly optimistic. They were better somewhat, winning their first exhibition game, but finished the preseason with a losing record. The national predictions appeared to be justified.

Opening day saw the Colts face another mediocre team from 1974, the Bears in Chicago. The three-point underdog Colts surprised and destroyed the Bears 35-7, and held their heralded rookie running back Walter Payton to no yards on eight carries in what was his first pro game. The Colts were winners but the Bears were not considered much of a test.

The next four games would be the real barometer as they had to face 1974 playoff teams the Raiders, Rams, and Bills in succession, while also facing the 7-7 Patriots in Foxboro. The Colts surprised each, but only for a half, as they led in each game before falling. (Losing leads, sound familiar Ravens fans?)

The Colts were again at the bottom of the division after five weeks but seemed to be better. The stats subtly showed that. They were averaging more than a touchdown a game better than in ‘74, and Jones was completing 60% of his passes, a league high. Defensively, they had 16 sacks in comparison to three a year ago after five games.

At 1-4 and trailing the Dolphins and Bills, both enjoying 4-1 records at the time, the playoffs were seemingly a dream – a quintessential long shot. But, reaching .500 was a reasonable goal and Marchibroda instilled in his player’s a mentality to play one game at a time.

Their next opponent was the Jets, whom the Colts beat for one their wins in 1974. Jones accounted for three TD’s, the defense had 7 sacks of Joe Namath, and returned an errant Namath pass for a score in a 45-28 win at Shea Stadium. The Colts followed this with a 21-7 home win over the winless Browns, setting up the rematch between the 3-4 Colts with 5-2 Buffalo Bills.

The Bills came in as 8-point favorites. That appeared to be more than justified as OJ Simpson scored three TD’s in the first 17 minutes of the game. After trading scores the Colts trailed midway thru the second period 28-7. What followed was the turning point of the 1975 season, and one the most impressive offensive performances of any Baltimore football team.

The Colts scored 35 unanswered points. It started with a Domres pass for a score on a fake field goal, a Jones 89-yard scoring strike to Roger Carr, a Jones TD run, and two Lydell Mitchell scoring runs which gave him three for the game. It all resulted in a stunning 42-35 Colt win. They followed this with another drubbing of the Jets 52-19. The 52 points were the most the Colts has scored in a game since 1964.

At 5-4 the Colts next went on the road to face the 7-2 Dolphins. Jones had to leave the game in the first period with injured ribs and they trailed 14-9. That did not stop the Colts as Domres came in and ran a ball control offense that gained 180 yards on the ground and scored 4 rushing td’s as the Colts shocked the Dolphins 33-17 to pull within one game of the division lead.

The next two weeks the Colts collectively outscored the Chiefs and Giants 49-14 for easy wins. The games were highlighted by interception returns for scores by free agent DB Jackie Wallace and 17th round draft selection, linebacker Stan White who that year would set an NFL record for most interceptions by a linebacker in a season with 8.

The 8-4 Colts next hosted a rematch with the 9-3 Dolphins on 33rd Street to play for the division lead. It was the Colts first home sellout since 1972. 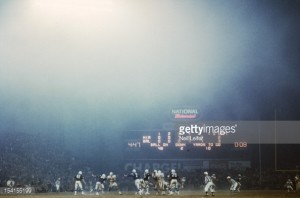 In one of the most exciting games played in Baltimore football history the Colts and Dolphins battled to a 7-7 tie in a defensive struggle. The Dolphins would virtually clinch the title with a tie.

The Colts needed a win.

With fog rolling in Memorial Stadium during overtime to add to the drama, a Miami punt rolled out of bounds on the Colt 4 yard line. Jones converted a key third down with a 20-yard completion to TE Raymond Chester to keep the drive rolling. Jones eventually drove the Colts for 17 plays taking them to the Dolphin 14. Where at 12:44 of OT, Toni Linhart’s 31-yard field goal not only beat the Dolphins 10-7, but brought the 1-4 Colts all the way back to tie the Dolphins for the division lead. By virtue of sweeping the Dolphins, now the Colts had only to beat the 3-10 Patriots at home in week 14 to complete the most outstanding and surprising turnaround in NFL history and clinch the AFC Eastern Division.

The Colts had won 8 games in a row, they were the hottest team in the NFL and playing with confidence. While all of the 48,400 fans in attendance that afternoon figured that after beating the Dolphins, a win over the 3-10 Patriots seemed a foregone conclusion.

But someone forgot to tell the Patriots.

Allen Carter silenced Memorial Stadium by returning the opening kickoff for a TD and when rookie QB Steve Grogan ran for a 4th quarter score the Patriots led 21-20. Yet the vibe that hovered at Memorial Stadium was one of confidence. There was no way the Colts could lose.

And they did not…

Mitchell would eventually gallop in with his 11th rushing TD of the season and DB Nelson Munsey returned a Grogan interception for a TD, which was the Colts league leading 4th pick-6. Along with that the Colts would lead the NFL in sacks with 59, compared to 1974 when they had 21 sacks. The Colts won the game and division 34-21.

In one season they went from a last place 2-12 team to a 10-4 division champion. They did it by getting up off the canvas, recovering from a 1-4 start and by winning nine games in a row during a 14 game season.

In the playoffs a week later the defending champion Steelers beat the Colts 28-10 in Pittsburgh. A game during which Jones was sidelined for most of the afternoon after being kicked in his throwing arm by the Steelers Glenn Edwards. The Colts made it interesting, leading 10-7 in the third quarter. They stayed in the game by intercepting a pair of Terry Bradshaw passes. In the end though without Jones the Colts could not generate a consistent attack.

Marchibroda was the unanimous selection for NFL Coach of the Year. Thomas won the NFL Executive of the Year award. Considering that there was no free agency back then the Colts were rebuilt the old-fashioned way – through the draft, trades and claiming free agents cut by other teams.

The NFL at the time did not enjoy the benefits of the parity we see in Roger Goodell’s modern day league. Then it was a story of the haves and have nots with the Colts falling into the latter category. Rapid turnarounds were few and far between and that makes the ’75 Colts achievement, winning 8 more games than the season before, all the more impressive.

The Miracle on 33rd Street.

This season, the 1-4 Ravens have an opportunity to match the feat of the Bert Jones led Colts of 1975 – to overcome a sloppy start and earn a playoff berth. In a league that is characterized by parity a miracle on Russell Street isn’t out of the realm of possibility.

They just need to take some advice given by the franchise’s very first coach and take it one game at a time.

Note: With a 1-4 start, the Ravens have to start piling up wins, especially against struggling teams like the 49ers. Watch the Ravens turn things around in person by using Hipmunk.com for flights to San Francisco, in addition to looking through cheap hotels in San Francisco on Hipmunk to enjoy the city before or after the game.