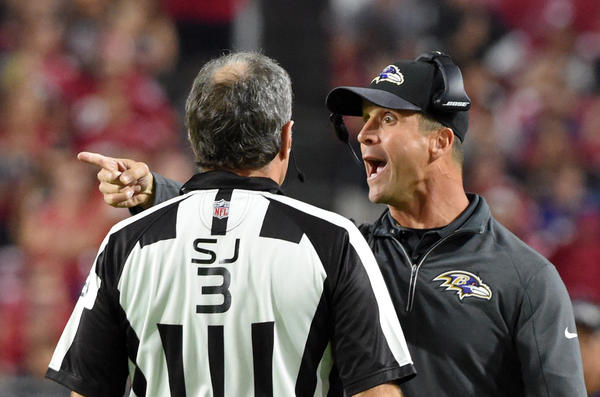 This afternoon, the Ravens proposed a rule change that would force offensive linemen to wear pinnies with a number ranging from 1-49 or 80-89 if they are reporting eligible. The rule proposal would eliminate the confusion that happened during the AFC Divisional Round matchup in 2014 and during a catch by John Urschel this season which was called back. Errors from the officials screwed up both of those plays.

The rule proposal seems like a fair change. Regardless of which side you take in this debate, we can agree that the intention was to cause confusion on Baltimore’s defense. We can also agree that John Urschel’s catch and run that Monday night that was called back should have definitely counted.

Don’t tell that to New England writers, who, like their fans, want to make everything about them.

From Kevin Duffy of MassLive.com:

When referring to the Baltimore Ravens, Tom Brady once said, “Maybe those guys gotta study the rule book and figure it out.”

How Baltimore interpreted it, apparently: Maybe those guys gotta change the rule book.

And from Doug Kyed of NESN:

It has been over a year since the New England Patriots deployed a confusing ineligible receiver strategy, and the Baltimore Ravens still don’t seem to be over it.

This has been what we have come to expect from New England media. The arrogance and narcissism of their fans has rubbed off on them. Instead of challenging any point of the proposal, they decide its best to talk about how badly the Ravens were burned by the rule. And by the way, the rule by which they were “burned” doesn’t even exist anymore.

Tom Ley of Deadspin has an actual reason why it might not work.

I suppose the proposed rule change would help solve these problems, but asking linemen to run to the sideline, squeeze themselves into a pinnie, and then run back to the huddle in time to get the play off seems impractical. Although the idea of a crucial drive being short-circuited because some flustered equipment manager couldn’t wrestle a pinnie onto a 350-pound man fast enough does sound appealing, from a purely comedic standpoint.

How about that? Logic! Take notes, New England media.

Anyway, in order to quell that concern, the jersey could be looser. Linemen would likely offer resistance to that, though. They are notorious for wearing tight jerseys to make sure they can’t be grabbed. They wouldn’t like having a loose piece of clothing to help defenders gain leverage.

One thing you can’t deny is that the rule, as it stands now, is a bad one. It relies too heavily on referees who are totally unreliable. At least with this rule proposal there will be an argument to change it.