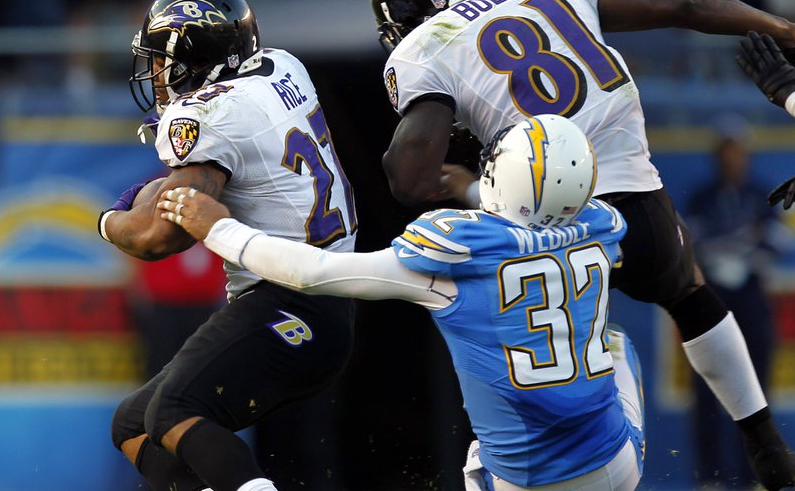 Say what you will about Ray Rice, but without him, Baltimore wouldn’t have won Super Bowl XLVII.

Perhaps the most clutch play of his career occurred four year ago today: “Check down, Hey Diddle Diddle, Ray Rice up the middle.”

In 2012, the Ravens started the season 5-1, with their only loss being by one point at Philadelphia in Week 2. In Week 7, they lost by 30 at Houston, right before their bye. Baltimore’s hot start was quickly stopped in its tracks, and what had been a promising season was suddenly hitting the skids.

They bounced back nicely, though. Following the blowout at Houston, Baltimore reeled off four consecutive wins to enter December with a 9-2 record. The ninth win came in overtime at San Diego, 16-13. That win would prove crucial, as the following five weeks would include four losses and a change at offensive coordinator.

The Ravens might not have known it at the time, but their win in San Diego would enable them to win the AFC North, give Ray Lewis one last home game, and put them on a playoff course that Baltimore fans would never forget.

The biggest play of that Week 9 contest against the Chargers came late in the fourth quarter, when Baltimore had nothing but ‘a chip and a chair.’ Yet, it wasn’t a scoring play or even a turnover. It was, however, a fourth down conversion that will be as memorable as it was improbable.

Down by three points, with just over three minutes remaining in regulation, the Ravens had the ball at the San Diego 40-yard line. After an incompletion and a 16-yard strike to Dennis Pitta, Joe Flacco had Baltimore in prime position. Unfortunately, a holding penalty, two incompletions, and a sack/fumble (recovered by Michael Oher) would present the Ravens with a fourth down and 29 to go from the San Diego 37-yard line.

Thank goodness for the checkdown.

On that 4th-and-29, Cam Cameron called four vertical routes, and had Rice stay in to block before releasing into the flat as a safety valve. On the surface, it seemed predictable and basic, and to some extent, it was. But, the Ravens offense executed that play perfectly.

Baltimore’s offensive line afforded Flacco just enough time to sit in the pocket and survey the defense. With his eyes, Flacco forced the San Diego defensive backs (two of which were Eric Weddle and Shareece Wright–current Ravens starters) to stay deep. Then after a few seconds, Flacco checked the ball down to Rice, and his signature shiftiness took over.

Rice raced across the field and after making multiple Chargers defenders miss,  he needed to clear one more obstacle before reaching the line to gain.

The former Cardinal absolutely laid Weddle out, and Rice was given just enough real estate to lunge for the first down. After a measurement and a Charger’s challenge, the Ravens officially gained a first down at the San Diego 34-yard line with 1:34 remaining and two timeouts at their disposal.

Justin Tucker came through once again, as he converted two 38-yard field goal attempts (one at the end of regulation to tie it, and one with 1:12 remaining in overtime to win it) to ensure a Ravens victory.

After an emotional three-point win at Pittsburgh the week before, Baltimore traveled cross-country to play the Chargers in Week 9 of the 2012 season. The Ravens were held scoreless in the first half and need 73:48 to defeat the Chargers.

As we all know, Super Bowl XLVII was won on February 3, 2013. But perhaps, when Rice converted 4th-and-29 in San Diego, the Ravens and Baltimore fans started to realize that the season was going to be truly special.