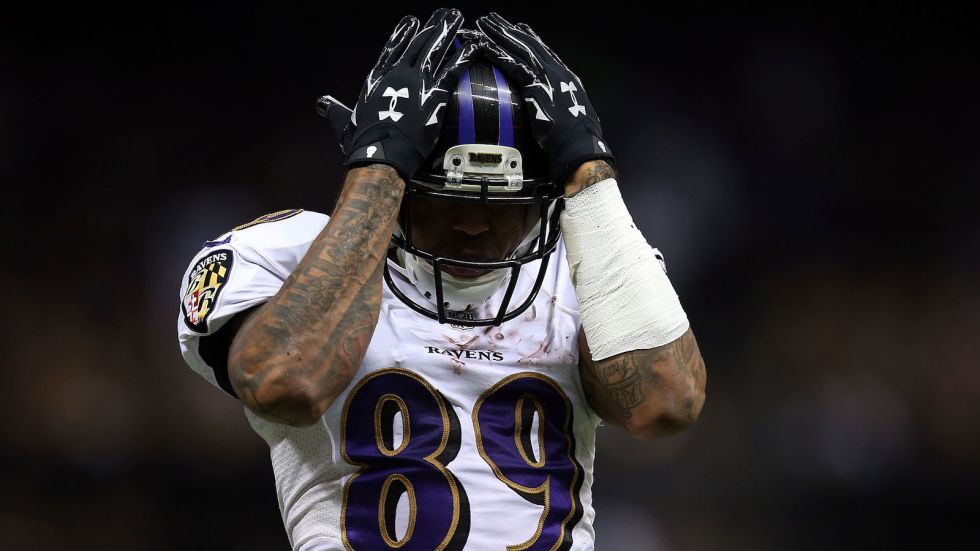 In a nutshell that sums up the Ravens 30-23 loss at Gillette Stadium on the grand stage of Monday Night Football.

The game wasn’t as close as the score. Typically, when your opponent throws an interception in the red zone, fumbles at their own 3 leading to a TD and then they fumble the ensuing kickoff leading to another TD, that normally spells defeat for the gratuitous team.

Nothing about last night’s game was normal.

Despite the extra day of preparation, the Ravens looked anything but prepared. The only thing the extra 24+ hours did was give the Patriots brain trust a bit more time to expose their more football cerebrally challenged counterparts. Brady v. Flacco, Belichick v. Harbaugh, McDaniel v. Pees, Patricia v. Mornhinweg. Add it up it’s akin to Harvard University v. Community College of Baltimore.

Following a week when they seemed to make major strides against the Dolphins, the Ravens took big steps backward against the Patriots.

Today, as we struggle through the aftermath, the plan is quite clear for the next 3 games. Win all three or it’s likely to be an early vacation for the Ravens followed by some necessary but unpleasant changes.

Let’s get to the unpleasantries from last night…

Despite little real estate to navigate, Kenneth Dixon (dropped passes aside, one of which would have gone for a loss) ran with determination and produced most of his 81 yards from scrimmage after contact…Kyle Juszczyk played inspired football despite being blown up like a Vin Diesel movie on the safety. He rumbled and tumbled his way for 40 yards following a short catch in the right flat…Ronnie Stanley and Marshal Yanda were solid at the point of attack and kept Joe Flacco’s blind side clean…Elvis Dumervil and Lawrence Guy pushed the pocket and each had 2 QB hurries…Zach Orr tackled well and was great in pursuit when plays were in front of him (10 tackles). In coverage beyond 10 yards he struggles…Eric Weddle was on his way to an excellent outing (11 tackles, interception, sack) but his blown assignment on the Brady to Hogan 79-yard connection was a back-breaker…Credit to the team for showing grit and determination. A team with less character would have crumbled against a superior opponent in such a hostile environment.

Joe Flacco’s stats will describe a quarterback with a solid outing against a tough opponent on the road. But his throw into double coverage resulting in a Devin McCourty interception was a complete crap-shoot. Last time I checked AJ Green is not on the Ravens roster. Flacco’s lack of patience in the pocket even with ample time to set and throw played right into the hands of Patriots defensive coordinator Matt Patricia, as the Ravens QB willingly accepted the short, underneath bait Patricia trolled with. The mounting frustration stemming from the premature check downs was evidenced by Steve Smith’s emotional outburst following a back shoulder catch for 25 yards in the 4th quarter. Flacco failed to move the Patriots’ defense with his eyes, body movements or pump fakes. He never even tried. It doesn’t help that his lack of salesmanship with the football is really exposed against a team as well prepared as the Patriots.

Down 23-3 in the third quarter Mike Wallace dropped a pass on a deep post that forced the Ravens to punt. Fortunately, the ensuing punt was muffed and the Ravens recovered on the Patriots 3-yard line. Wallace’s effort on the McCourty INT was questionable…Dennis Pitta’s lack of physicality was evident all night. He was manhandled by the Patriots linebackers.

Jerraud Powers is a coverage liability. The sooner he falls down the depth chart the better the Ravens will be but with Jimmy Smith’s high ankle sprain and Matt Elam seeing meaningful time following the Powers concussion, solutions are hard to find, particularly with a lack of pressure on Brady. The combination is a recipe for disaster. Somewhere Ben Roethlisberger was salivating…CJ Mosley remains a coverage liability. When teams recognize Mosley’s coverage assignments and they get him out in space, let’s just call it low hanging fruit. Brady exposed him for a 61-yard pitch and catch with RB James White. Mosley looked like he had a piano on his back while in pursuit…The Ravens reclaimed their spot as the second most penalized team in the league with 8 flags for 47 yards.

The Ravens were 0 for 6 on third down in the first half and they had just 7 rushing yards on 4 attempts before the break. Why John Harbaugh doesn’t find this to be alarming is mind blowing. This isn’t the first time that such an anemic running game helped to ground the Ravens offense. Where’s the accountability? …Marty Mornhinweg was completely outclassed by Matt Patricia. Heading into the game, Joe Flacco had completed 112 passes on throws to the middle of the field, first among NFL quarterbacks. The trend did not go unnoticed by the Patriots defense as they choked down between the numbers and the Ravens seemed reluctant to go outside except on check downs. Two shots down the sideline produced 72 yards on throws to Breshad Perriman (47 yards, left sideline) and Steve Smith (25 yards), respectively. Remember when Flacco could hit Derrick Mason all day on simple out patterns? Yeah, me too…Mornhinweg’s personnel groupings and formations were apparently familiar to Patricia who was often one step ahead of his counterpart. The running play from the Ravens own 1-yard line was as predictable as Joe Flacco’s cadence. It was dead on arrival…Remember when the Ravens took a few shots down the sideline each week when they got man coverage and even without a completion they’d often got a DPI? Yeah, me too. 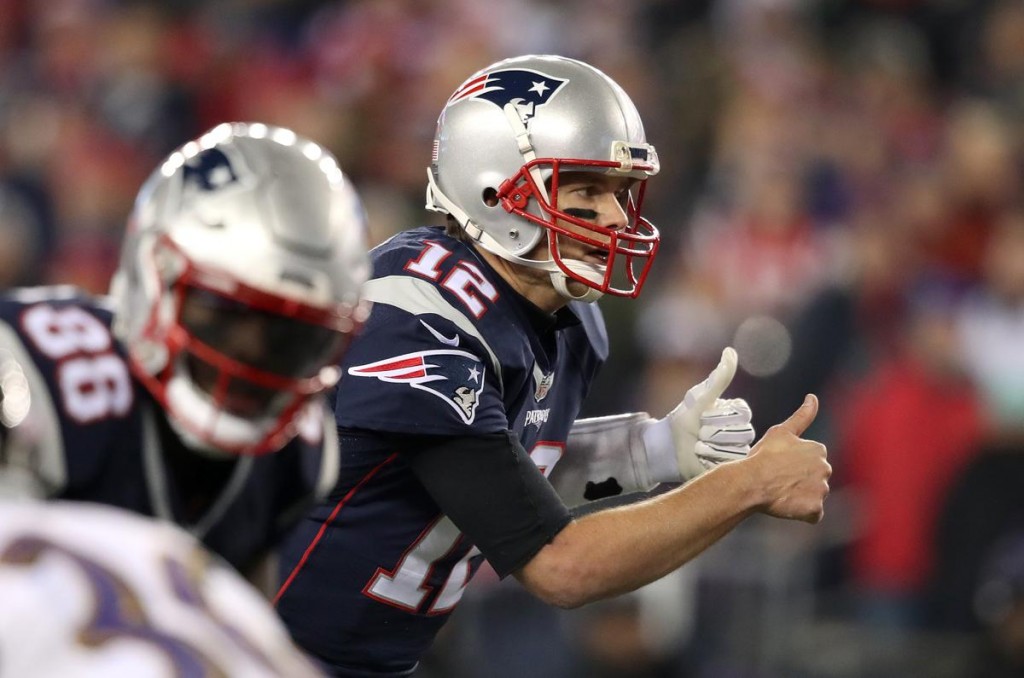 Defensively the Ravens just flat out gave Tom Brady too much time to throw. They played press coverage to minimize the damage on the dink and dunk, but they only managed 1 sack on 39 drop backs by Brady and too often gave him time to allow plays to develop downfield. Maybe they should have given up more of the dink and dunk? Think about this – the Patriots had 257 yards on 6 key pass plays and they averaged 10.3 yards overall when throwing the ball. On the evening Brady racked up 406 yards passing and 496 yards overall against the unit formerly known as the No. 1 NFL Defense…Pees just had no answers for Brady who regularly found mismatches in coverage and exploited them. He was like a lion identifying wounded potential prey in the Serengeti.

Justin Tucker has been rock solid – perfect through his first 12 games. But give the Patriots coaching staff credit for looking at tendencies in the Ravens kicking game too. They found one and concluded they could time the snap and send a flyer over long-snapper Morgan Cox to end his string of successful field goal attempts at 28. Shea McClellin’s block resonated as each succeeding PAT or FGA was a bit shaky and clearly not as impeccable as the balance of Tucker’s season.

Shea McClellin jumps over the center and blocks Justin Tucker’s field goal to preserve the Patrio… – via @ESPN App https://t.co/nLGXLITyAZ

There’s no need for Devin Hester to continue to siphon salary from the Ravens. When a player who can successfully complete a simple fair catch is a definitive upgrade over the incumbent, it’s time for the incumbent to pack his bags. The Ravens defense opened the game with 2 three-and-outs and quickly had Brady frustrated. Things were going well but that momentum ended abruptly when Hester failed to come up and field yet another punt, allowing it to roll to the 1-yard line. One play later it was 2-0. Unfortunately, Devin Hester is ridiculous again – in all the wrong ways…Speaking of ridiculous, the Ravens clock management and complete lack of any sense of urgency is just flat out amateurish. It’s like their play clock is in dog years! And that rests on the shoulders of their quarterback (who looked like he was just rolled out of the O.R. following a lobotomy) and on the shoulders of Harbaugh and Mornhinweg. They should expect more from the hurry up and if for some reason they don’t, then owner Steve Bisciotti should hurry up and do something about it before it’s too late.

Facing 4th and a ½ yard with 2:07 to go and down by 10 at the Patriots 20, Harbaugh decided to kick the field goal instead of going for it and possibly setting up an opportunity to score a touchdown. This was the decision from a coach who regularly goes for it on 4th down with more than a ½ yard to gain, even from within his own territory. Given the way the game had gone up to this point, if your team can’t gain a ½ yard, why would he think that the sequence of field goal, successful onsides kick and a 50+ yard drive for a touchdown with under two minutes on the road against a Belichick-Brady led team is a better alternative?

No one from the Ravens was worthy of the award but in the spirit of Megan’s movies where she’s been known to give “it” away, this week’s award is shared by two Patriots who did their best to keep the Ravens in the game and give it away – namely Cyrus Jones and Matt Slater. Their back-to-back fumbles allowed the Ravens to close the gap from 23-3 to 23-17 within 85 seconds of the third quarter.

On to the Eagles!

And in other news… 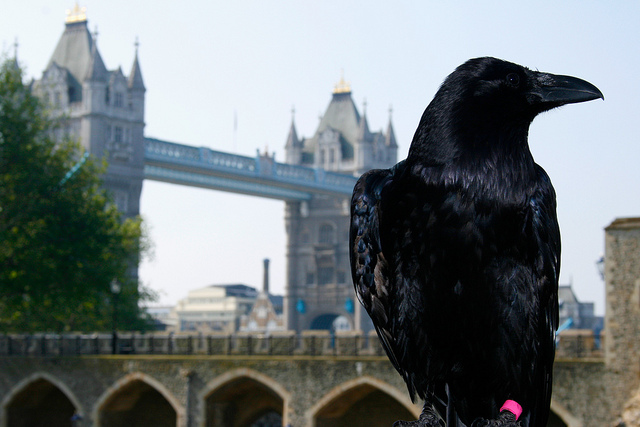