The NFL had brutal ratings all season long… good thing the Wild Card Weekend came around to right the ship!

Fortunately for us NFL fans, the likes of backup QB Matt Moore, practice squad worthy QB Connor Cook, looks-12-but-really-28-year-old Matthew Stafford, and the New York Boat Brigade have all gone golfing; meanwhile the best (sans Brock Osweiler) will face-off in this weekend’s Divisional Round and the NFL’s rating shall be saved!

Once again, let’s give these match-ups the Joey Porter treatment, shall we?

Everybody keeps dubbing this the ‘Battle of the Birds‘ as if it’s some sort of original tag line in a league that also boasts the Ravens, Cardinals, Eagles & Browns (those would be the boo-birds).

This is actually a very interesting match-up.

On one side of the field, you have MVP candidate Matt Ryan (fun fact- that just took me like 5 minutes to type those 4 words in that order) and a sneaky good Falcons team. On the other side of the field awaits Russell Wilson and a playoff tested (and proven) Seahawks team.

[Sidebar: did anybody else almost lose their minds when the Seahawks threw on 4th and goal from the 1 last week? Richard Sherman was about to jump out of his jersey!]

And what’s more telling? The Falcons defense ranks 25th in yards per game allowed, 28th in pass yards allowed, and 27th in points allowed per game. Kinda plays a role in why the offense needs to chuck the ball around and score a ton…

Oh, and that Matt Ryan guy? He can count his playoff wins on the same number of fingers that Joe Flacco can count his Super Bowl MVP’s on. He kinda has this whole playoff allergy thing going for him. Like clams up when that post-season smell is in the air, and I expect that to happen once again.

I still think Russell Wilson is overrated, but at least he knows how to win in the playoffs.

Meh… not so much.

This game absolutely should have been the day game and not the prime time night game. Why? Because this will be more laughable than Pete Carroll talking about how great Devin Hester looked after the Seahawks signed him. 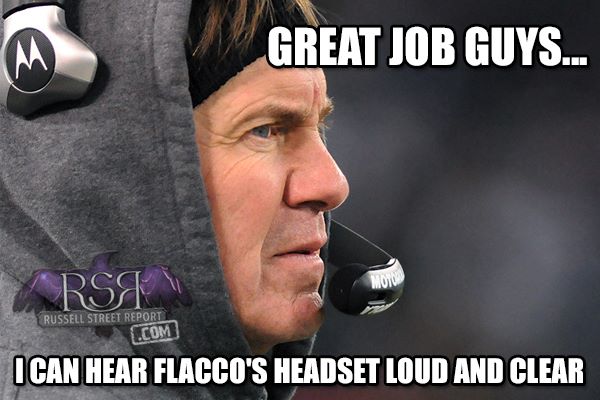 Houston brings their awful, overpaid quarterback Brock Osweiler, their hanging-on-by-a-thread coach Bill O’Brien, and… I mean, I guess Jadeveon Clowney would be the next notable name? Deandre Hopkins maybe? Actually, I think I’m more intimidated by the injured JJ Watt on the sidelines than anybody else on the field for the Texans.

I don’t need to show stats here for you to know how this game is going to go. The Patriots are proven winners in the post-season going toe to toe with a mediocre-at-best Texans team that made it this far in the playoffs thanks to Derek Carr‘s injury and… nope, that’s pretty much it.

Expect scoring early and often… by the Patriots.

Expect turnovers… by the Texans.

Expect this game to be over by the end of the 1st quarter.

The first 28 minutes of the Packers Wild Card game against the Boats & Bros team from New York was relatively silent. People started talking about the Giants shutting down the Packers, and thought the game was done.

Then Aaron Rodgers woke his inner-MVP and the Giants were systematically dismantled in a drubbing of a game.

Of course the Giants were in an offensive tailspin to end the regular season, while the Packers opponent on Sunday, the Dallas Cowboys, are just a tad better on offense, and actually seem to mimic the Packers in a few key categories:

Of course Cowboys fans will point to the ‘Boys 30-16 Week 5 victory over the Packers at Lambeau as a clear cut sign that the Cowboys have the upper hand. And while I agree they have the advantage in their run offense vs the Packers run defense, it’s also worth noting that this is NOT that same Packers team from early this season. Rodgers was a bit lost, the run game was completely non-existent, and that loss to the Cowboys set off a collapse where the Packers would lose 5 of 6 games… before rattling off 6 straight regular season wins (7 if you include last week over the Giants in the Wild Card Round).

The X-Factor here is once again experience. Give me Aaron Rodgers and his savvy veteran experience (and Super Bowl ring, and discount double check, and Olivia Munn) over the young bucks in Dallas who seem overly confident and cool.

Actually, I haven’t heard a peep from Dez Bryant about playing the Packers in the playoffs… wonder why…

Tony Romo will have himself a phenomenal swan song riding the pine and watching another QB not named Tony Romo fall short in the playoffs, thus helping him cope with all of the years of Romo-bashing that he once endured for the team’s shortcomings in the playoffs.

Still stings Dallas, and this Sunday won’t help you exercise those demons, as the hot-handed Packers keep rolling.

Humor me… who is all of the pub surrounding for this matchup?

Running back touting himself as an innovator? Steelers

Not really injured QB who acts all injured & ESPN felt obligated to send me a notification updating his tear flow rates? Steelers

Meanwhile, Andy Reid and the Chiefs are quietly preparing for this weekends match-up at home…

And while most folks will be looking at the Steelers shredding the Miami Dolphins defense in last week’s Wild Card match up, people tend to forget that the Chiefs defense ranks 7th in PPG allowed and pose much more of a threat than the hapless Dolphins did last week.

All of the talk last week was about his 2 big touchdown passes to Antonio Brown. Except… roughly 87.5% of those yards were yards after catch, and a result of Antonio Brown’s wheels coupled with a Miami secondary that would be honored to bring Shareece Wright on board next season as a starter.

Of course, if you pay attention to the NFL outside of Baltimore (and I’m sure you do because fantasy football says so) you’d also know that the Chiefs have already lost to the Steelers this season. Badly. Like REALLY manhandled.

But I chose to disregard those ‘facts‘ and I am calling a Travis Kelce party in the endzone on Sunday. TWICE. And we’ll all mimic his dance moves here in Baltimore as we rejoice watching the Steelers get knocked out. Sure they’ll still brag about their super cool AFC North Champs tee-shirts, but we know how to respond accordingly (“hey, what will your team be doing on Super Bowl Sunday?”)

Oh, and I’m picking an obscure score for the Steelers who seem to go for the 2-point conversion at the most random times in games, whether or not it makes any sense.

In a perfect world, we’d see the Patriots and Steelers go down just so we don’t have to worry about one of them making it to the Super Bowl.

But ultimately, I just hope it’s not 4 more blow outs with all of the top seeds advancing with ease.