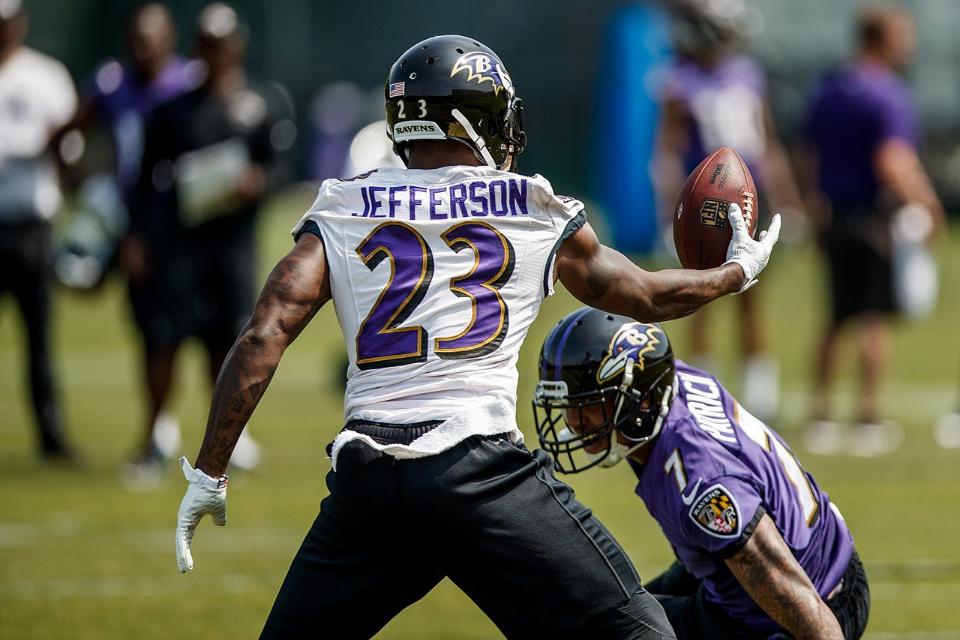 When the Ravens signed DT Brandon Williams 5-year deal worth $52.5M, with $27.5M guaranteed, I wasn’t a fan of the move. It’s not that I have anything against Williams. He’s a very good player who contributes mightily to the effectiveness of the team’s run defense. The issue I had with the signing is that the Ravens had limited cap space entering the new league year and then committed so much of that space to a two-down player. Plus, the Ravens had so many other needs to address.

But let’s give the front office some credit for seeing the big picture. Despite a cap situation that was among the league’s worst, the Ravens were able to land S Tony Jefferson, CB Brandon Carr and RB Danny Woodhead. They re-signed Lardarius Webb to a much less expensive deal. They quickly replaced injured nickelback Tavon Young with the capable Brandon Boykin and of course they’ve added Jeremy Maclin. And Ben Watson agreed to a healthy pay cut.

There are still weaknesses to address and time is running out. But to cover the ground that they have during an offseason that may have been the club’s most challenging since the 2002 cap purge, is a testament that Ozzie Newsome & Co. still have what it takes to restore the Ravens to a perennial contender.

Early on during free agency, Tony Jefferson’s name was linked to the Ravens. It seemed like a perfect fit although affordability was a concern. Obviously the two sides struck a deal and since Jefferson signed his new contract, without ever wearing the Ravens’ colors on Sunday, he’s emerged as a leader.

Jefferson seems determined to help restore the Ravens defense to greatness. His contract is a byproduct of his ambition but it isn’t his end game. He’s said in the past the he doesn’t play the game for the money. It’s bigger than that for Jefferson and this season he appears focused on elevating his game.

“This is an opportunity for me to step out and be a household name.”

Jefferson is stepping up as a leader and like his safety sidekick Eric Weddle, he has become quite the headhunter. And I’m not talking about a dirty Vontaze Burfict kind of headhunter.

Jefferson hosted an NBA Finals party and invited Jeremy Maclin while the team was still courting the wide receiver. In another fine “Byrne Identity” on BaltimoreRavens.com, Bobby Engram shared this:

“It was a good-sized group and a good cross section of our team. I think this was a very important part of Jeremy’s decision. He saw who we were, from a longtime Raven like ‘Sizz’ [Terrell Suggs], to newer teammates like Tony and Eric [Weddle]. There were at least 15 players there, and they were into the game. I think he was impressed with the whole group.”

Jefferson would later explain his rather obvious end game.

“I wanted him to be around our guys – see for himself, how we communicate and react to each other. Our team chemistry is great. And, I wanted him here. I’ve played against him. He’s a beast. I thought he got a really good feel for us that night.”

It’s often difficult to determine how effective players are during OTA’s. They play at different speeds and each player has his own goals and objectives during each team outing. Sometimes they are trying to sharpen technique. Other times they are learning new terminology or they are trying to develop rapport with teammates that will translate to winning during the season.

But as observers, we aren’t clear on what that day’s practice agenda is for any given player. For some, particularly the established vets, the goal might be as simple as getting in the work – to get into football shape. And those players might not play as fast during practice as players whose jobs are on the line.

That’s why it may appear at times that an undrafted free agent is outplaying a former high draft pick.

Back when WR Tandon Doss was a Raven, he enjoyed a particularly solid camp one summer. Former Ravens offensive coordinator Cam Cameron was asked about Doss’ performance following a productive afternoon.

“This is practice”, said Cameron. “Let’s see how they do when we introduce the threat of contact.”

What you see in practice might not be what you get on Sunday in the NFL. The untrained eye can be deceived.

When Michael Oher left the Ravens following the 2013 season, eventually signing a free agent contract with the Titans, many were concerned about who would play right tackle. Some rumors surfaced that the Ravens might entertain signing Eric Winston. That didn’t happen. What did happen is that Ricky Wagner was given the opportunity to earn the job and he did.

Fast forward to 2016, the year Daryl Smith was let go by the Ravens. Concerns about Smith’s replacement were regularly expressed but to the surprise of many, Zach Orr stepped up and performed at times like a Pro Bowl player.

Now Orr is gone and we’re left wondering who will step in for him.

Put me down as a big believer in Kamalei Correa. He’s fast, plays the game with enthusiasm and he’s instinctive – provided of course the coaching staff doesn’t weigh him down with too many responsibilities in unfamiliar positions. And that’s exactly what happened last season.

I recall early on during training camp in 2016, the Ravens ran a play we’ve seen many times, with great success – the tight end (in this case Maxx Williams) streaking down field parallel to the hash marks. Joe Flacco typically drops the ball behind the linebackers and in front of the safety. Only this time, Correa’s drop was on point and Flacco’s pass slightly underthrown. But it does shed some light on Correa’s athleticism. Take a look…

Unless the Ravens sign a right tackle, James Hurst will get an opportunity similar to that of Wagner back in 2014. And that’s a very scary proposition for Flacco and the Ravens. It was Hurst who was steamrolled and pushed back into Flacco when the Ravens QB suffered that torn ACL in 2015.

Players can and do improve and maybe that can happen for Hurst. But his body of work suggests otherwise. Unless new offensive line coach Joe D’Alessandris is the Offensive Tackle Whisperer, Hurst at best provides below average depth to a line that needs to improve if the Ravens are going to protect their quarterback and commit to the run game as they’ve repeatedly vowed this entire offseason.