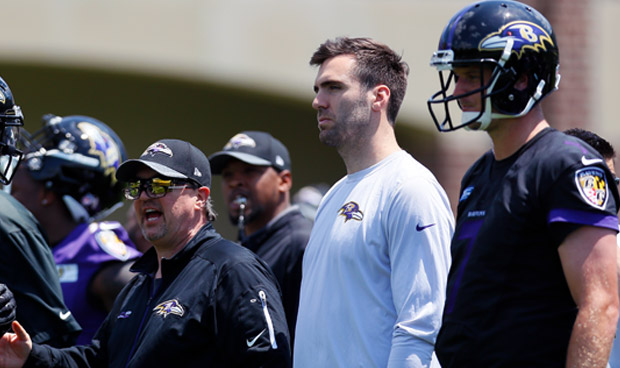 There has been rampant speculation about the severity of Joe Flacco’s back injury.

Ravens coach John Harbaugh said at the beginning of camp that Flacco would be sidelined for about seven days. Flacco met with the media on Friday and was less confident about the exact date.

When asked when he might return to practice, Flacco replied: “I’m not really sure. Hopefully not too long, but at the same time, it is kind of a waiting game. I think we are being conservative, a little bit cautious. I have some tightness down there [in my back]. I was out here over the weekend and dealt with a little bit of it afterwards. It is just one of those things where you have to be patient and not let your competitive nature get the best of you.”

A report by Ian Rapoport of the NFL Network claimed Flacco could be sidelined three to six weeks. However, I’ve been told by other NFL sources that Flacco would only be out that long “if he ends up injuring his back again.”

There was also a report in the San Diego Union Tribune that claimed Flacco might be dealing with a herniated disc. That type of injury could hamper a player throughout the season.

When Flacco was asked whether his back injury is a disc issue, he replied: “No. It is just a little bit of stiffness.”

The speculation about Flacco won’t end until he actually steps on the practice field and is able to participate in team drills.

And despite his detractors, the Ravens’ season could hinge on his health. Flacco has struggled recently, going 29-29 since winning the Super Bowl in 2012. He has thrown 80 touchdowns and 61 interceptions over that four-year span.

Adding further intrigue to the situation, Harbaugh said the team would consider signing Colin Kaepernick if Flacco might not be fully ready for the regular season. Baltimore has missed the playoffs for three of the past four years, so there is a sense of urgency in Owings Mills.

Right now, Kaepernick appears to be solid Plan B if Flacco is not 100 percent, especially if he can regain the form that highlighted his early career. The Ravens also have one of the best public relations staffs in the NFL and they could handle the potential backlash with the signing of Kaepernick.

For now, though, Baltimore is confident Flacco will be the starting quarterback for the regular season opener Sept. 10 in Cincinnati. If nothing else, there should be more clarity to the situation this week.

— The Ravens placed an emphasis on improving their pass rush in the offseason. So far, the team looks like it accomplished that goal with a pair of rookies.

Outside linebacker Tyus Bowser, a second-round pick from Houston, has been especially impressive getting to the quarterback and with his pass coverage skills. He had 8.5 sacks and 11.5 tackles for a loss over eight games for the Cougars last season. He is also played two years of basketball at Houston.

“He has really taken a step here, I think, in the first few days of training camp of coming back more prepared,” defensive coordinator Dean Pees said. “Coming out of OTAs, I thought, ‘OK, it’s going to be a little while in training camp.’ But, he’s come out here more prepared than I thought. He’s a quick-twitch guy.”

Tim Williams, a third round pick from Alabama, also could make an immediate impact. He has been dominant during 1-on-1 pass rush drills, beating left tackle Ronnie Stanley, the team’s first round pick past season.

“He looks like the guy that we drafted,” Pees said about Williams.

— Keep an eye on Keenan Reynolds and his ability to make plays on special teams and as a returner. The former, record-setting Navy quarterback has made big strides since his rookie season on the practice squad.

Reynolds has also improved as a receiver. However, a spot on the final roster will likely hinge on his special teams play.

— While second-year, offensive lineman Matt Skura has been impressive, it appears that veteran Ryan Jensen has the inside track as the starting center. Jensen was able to get a firmer grip on the job when John Urschel decided to retire hours before the first full-squad practice of training camp.

“Well, as you know, Ryan is a tough, physical guy,” offensive coordinator/quarterbacks coach Marty Mornhinweg said. “[There were] a couple center-quarterback [snapping] deals going on. We have to get that ironed out. Other than that, he’s doing a heck of a job. He’s a good football player.”

What would be your immediate reaction if the Ravens did as Herm Edwards suggested and sign Colin Kaepernick?