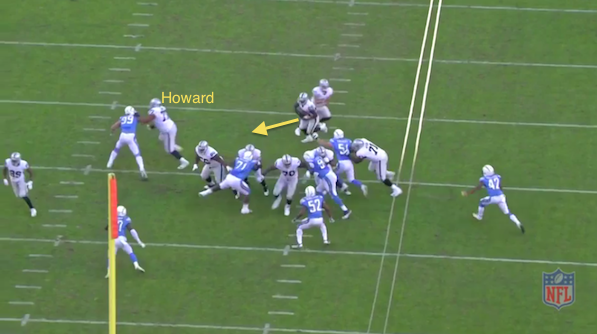 As the Baltimore Ravens prepare for the Washington Redskins on Thursday night, one projected starter who will not be on the field is newly signed right tackle Austin Howard.

After joining the Ravens last week to the tune of three years and over $15 million, Howard has yet to practice with the team. This is likely a result of Howard’s continued recovery from shoulder surgery in January, but patience from Ravens fans will run thin if Howard’s absence carries over into next week.

Looking at the big picture, despite Howard’s absence from the practice field, he is expected to be the team’s starting right tackle this season. This comes after the departure of Ricky Wagner in free agency and the ongoing underwhelming play of James Hurst. Luckily for Hurst, Thursday’s game against the Redskins gives him a chance to prove himself with the starters, but given Howard’s hefty contract, there appears to be little hope for Hurst to sneak into the starting lineup for the regular season.

A healthy Howard gives the Ravens more experience and stability and right tackle, but what should the expectations be for Howard in 2017 as he works to fill in the gap next to Marshal Yanda?

The unfortunate reality is Howard not only has not practiced yet this season, but he also has not played a full 16-game season since 2014. Howard played through the shoulder injury in 2016 and quite frankly looked below average at times. The hope for Baltimore is that the surgery in January will right the ship for Howard and allow him to return to pre-injury form.

Let’s rewind to 2016 and take a look at where Howard excelled and where he struggled, as come September, the Ravens will be turning to Howard to anchor the right side of the offensive line.

Battling through the injury, Howard still had success as a run blocker. In the Wild Card round against the Houston Texans, Howard held his own on run plays. 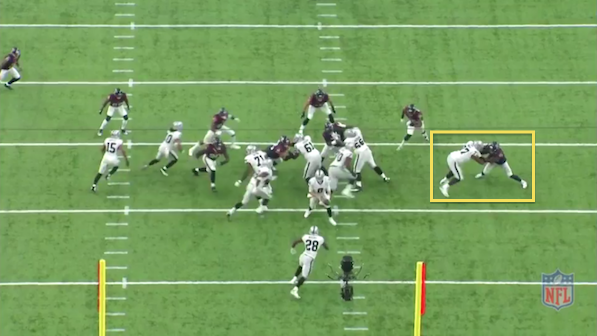 Howard’s technique was inconsistent throughout the season, but he gained leverage more regularly on run plays. Once he locked onto the defender, he showed consistency in maintaining the block throughout the duration of the play. 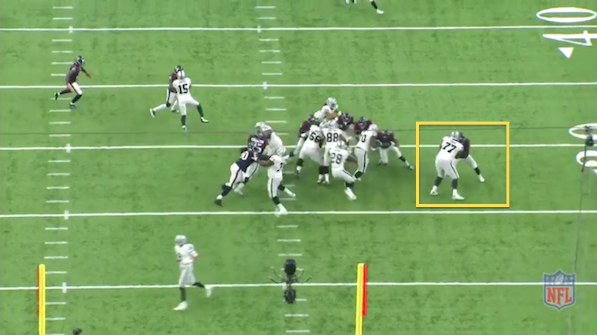 Even if the run play was not necessarily to Howard’s side of the line, he maintained aggressiveness and effort through the whistle. 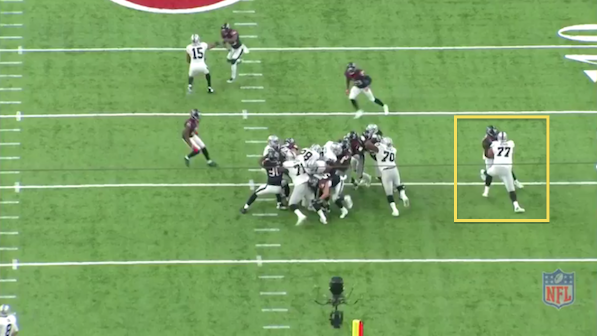 This was apparent against some of the better defensive ends in the NFL, including Joey Bosa of the Chargers. On this play, the run is to Howard’s side, making it a necessity for Howard to create space. 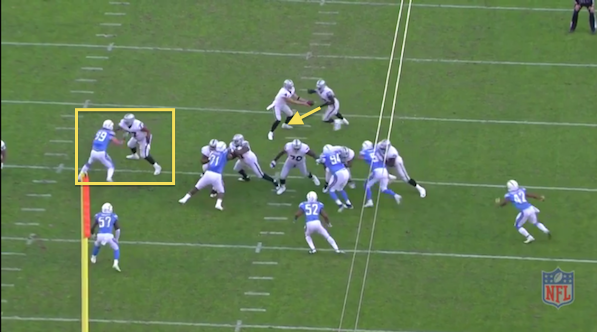 Howard engages and turns Bosa away from the play as the running back receives the handoff, allowing for a run lane to open up.

Through relentless pursuit, Howard is able to not only latch on to Bosa, but then drive him away from the ball carrier, allowing for a clean run lane. 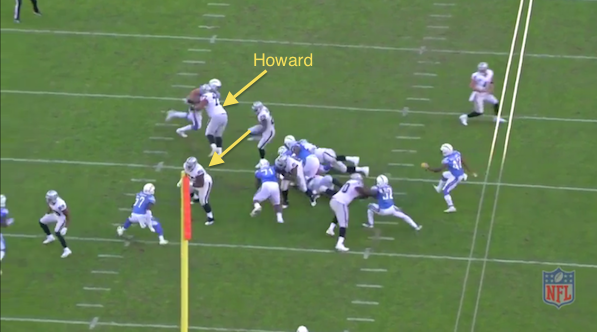 Howard was far from perfect as a run blocker in 2016, but he was rather consistent, and should provide some value in that aspect for Baltimore this season.

Unfortunately, on the flip side, Howard was much less consistent as a pass blocker. His technique and form seemed to be below par relative to his run blocking, and more talented edge rushers gave him fits all season.

In the playoffs against Whitney Mercilus, Howard engages well off the snap. 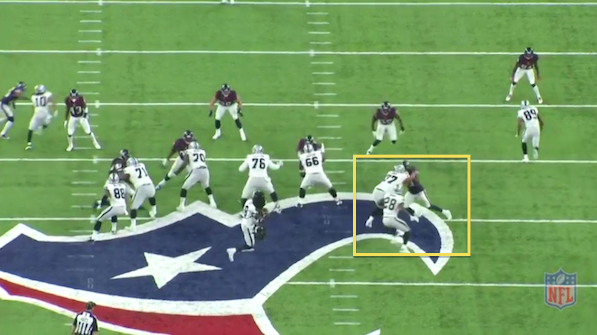 Mercilus, however, is able to take advantage of an overextended Howard, dipping his shoulder and taking the inside route to the quarterback. 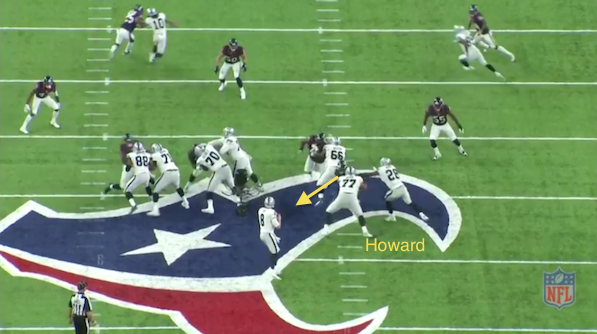 At this point in the play, Mercilus has all of the leverage, allowing him to dip and shred through Howard’s marginal block, creating a direct path to the quarterback. 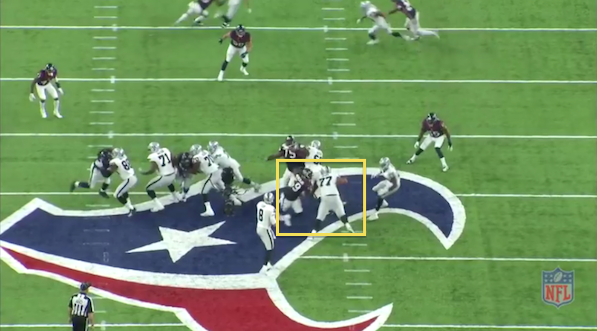 The same type of play was on display against Bosa, as Howard allowed the pass rusher to gain inside leverage off the snap. 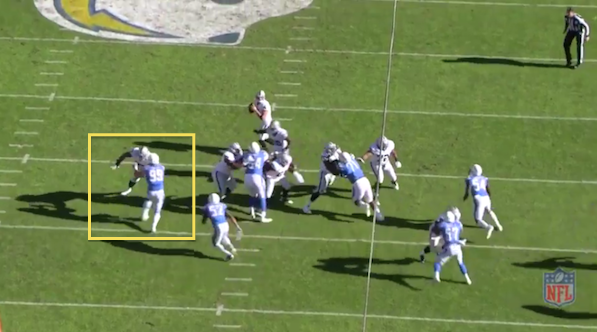 Bosa’s quickness is too much for Howard, as he bends around the inside and toward the quarterback. 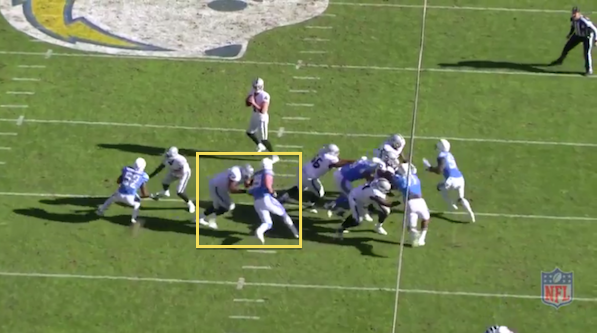 A combination of slow feet and less than desirable strength from Howard leads to Bosa effortlessly pursuing through the block, forcing the quarterback out of the pocket. 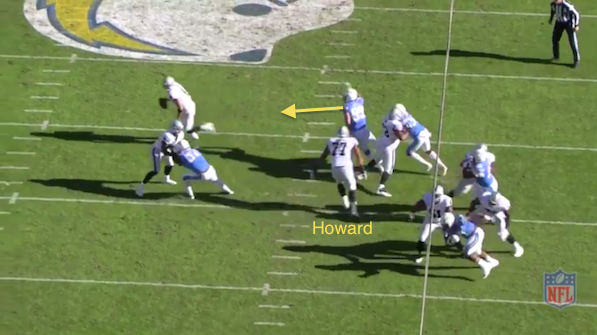 Whether it was due to the injury, poor technique, or a combination of the two, Howard simply did not look the part as a pass blocker last season.

The surprisingly large contract for Howard will create the expectation that he should seamlessly fill the void left by Wagner, but the reality is that Howard struggled in 2016 and is coming off of major shoulder surgery. When healthy, he is surely better than Hurst, but is still below the talent of Wagner.

Expectations should be tempered for Howard, as all the Ravens need at right tackle is some consistency, not necessarily stellar play. With a healthy Ronnie Stanley, Alex Lewis and Yanda, the Ravens will have three studs who can carry the offensive line. An ideal scenario is Howard starts all 16 games, provides value as a run blocker and is simply “good enough” as a pass blocker.

Expecting Howard to step in and effortlessly replace Wagner is too much to ask, but if he can offer some level of consistency, the Ravens can get by with what they have as a starting offensive line this season.