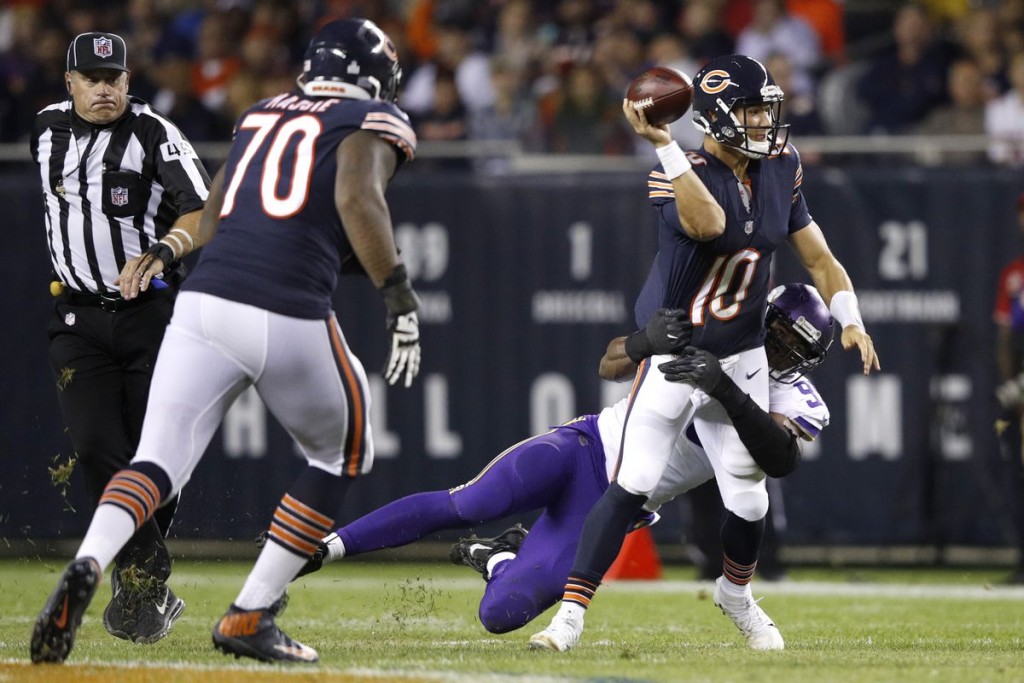 Defensive coordinator Vic Fangio is not a household name like some of the more notable defensive coordinators around the league such as Wade Phillips or Greg Williams or Jim Schwarz. But he’s one of the best. Fangio challenges quarterbacks because he won’t show much movement in the pre-snap phase. But once the ball is snapped, the defense morphs into something different. It’s especially difficult to decipher what type of coverage Chicago is in from the pre-snap to post-snap transition, as Fangio will mix up coverages consistently.

It’ll be a difficult read-and-react situation for quarterback Joe Flacco. He’s going to need to stay patient after the ball is snapped and wait for the defense to declare itself before he pulls the trigger. It’s going to be a tough adjustment because the west coast offense is timing-based, but he’ll need to be extra cautious. 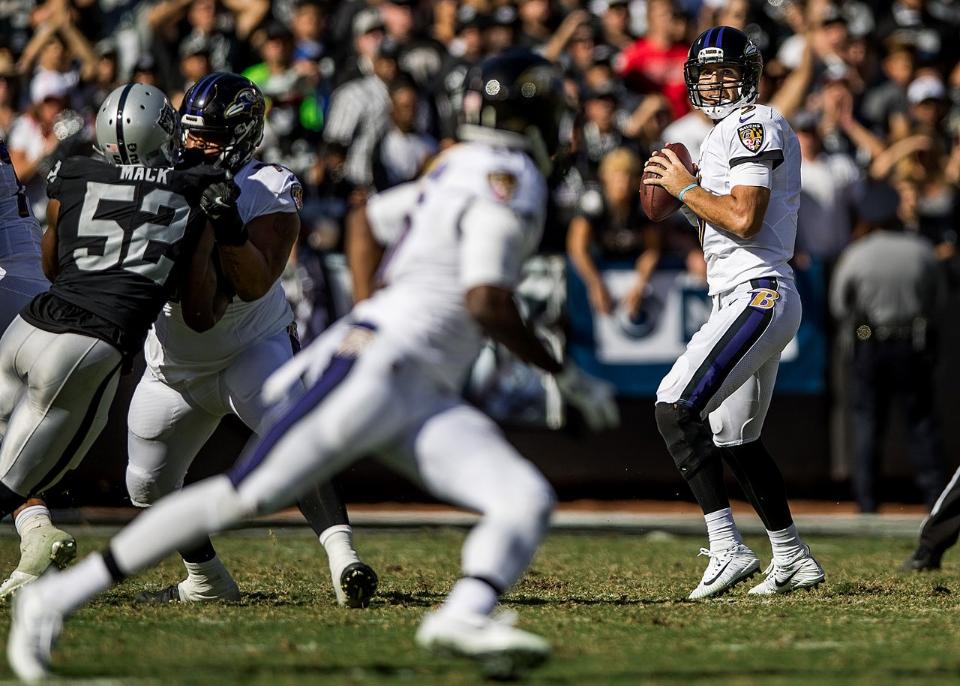 2. Change Up the Tempo

Another way to handle a defense that shifts around a lot after the snap is to speed up the snap count on them. Don’t let them get set. By snapping the ball earlier in the count, and varying the times when the ball is snapped, the defense will also have a harder time adjusting throughout the game.

The Ravens and Flacco in particular don’t mix up their cadence enough. It’s an area that Flacco showed better awareness with at the beginning of the season. There was some use of a quick count against the Browns. But they need to revisit this tactic against the Chicago defense.

In addition to changing up the timing of the snap and running some quick count action, offensive coordinator Marty Mornhinweg should run the ball on these plays. The Bears have been a stringy run defense overall this season, but with the injuries suffered at the LB position last week against Minnesota, this group is more susceptible than they were at the beginning of the season. The Vikings were able to wear them down and rip off some chunk gains in the second half, including a 58-yard TD to Jerick McKinnon.

Mornhinweg and run-game coordinator Greg Roman need to continue devising ways to get their interior linemen to the second level and pound these Chicago backers.

When Roman was brought in to take over the rush offense, we knew that the tight ends would be instrumental to the blocking attack. In San Francisco, Roman would run a lot of two-tight packages featuring Vernon Davis and Delanie Walker, with Walker playing the role of the H-Back who would move before the snap and pull on isolation blocks.

That H-Back role has largely fallen on the shoulders of Nick Boyle. He’s been the lynchpin lead blocker in the run game. Last week against the Raiders, Boyle was the motion man on well-timed wham blocks and pull blocks against Oakland’s inside backers.

The first offensive drive of the game featured three-tight looks, and throughout the game, two-tight ends (mostly Boyle and Ben Watson) were on the field. The two-tight packages were essential to containing Khalil Mack’s pass rush last Sunday. Similarly, look for more of those two-tight and three-tight combinations to contain the emerging Leonard Floyd.

Out of these multiple TE looks, play-action has some bite, and Mornhinweg can create favorable matchups against the decimated Chicago linebackers.

Rookie QB Mitchell Trubisky looks like the real deal. He’s got tremendous touch and location as a passer. Moreover, he’s an impressive athlete who can throw on the run. Offensive coordinator Dowell Loggains has completely tailored the offense to Trubisky’s strengths. That means a lot of boot action and opportunities to get the young gun comfortable operating outside of the pocket.

Defending boot action requires playing with discipline – something the Baltimore defenders just haven’t done a good enough job of this season. The edge defenders in particular can’t be too aggressive chasing the run down the line. When the Bears ran the bootleg, Trubisky consistently moved to his right, so it’ll be up to the combo of Za’Darius Smith and Matt Judon to stay backside and get in the face of the rookie when he rolls off the play-fake. 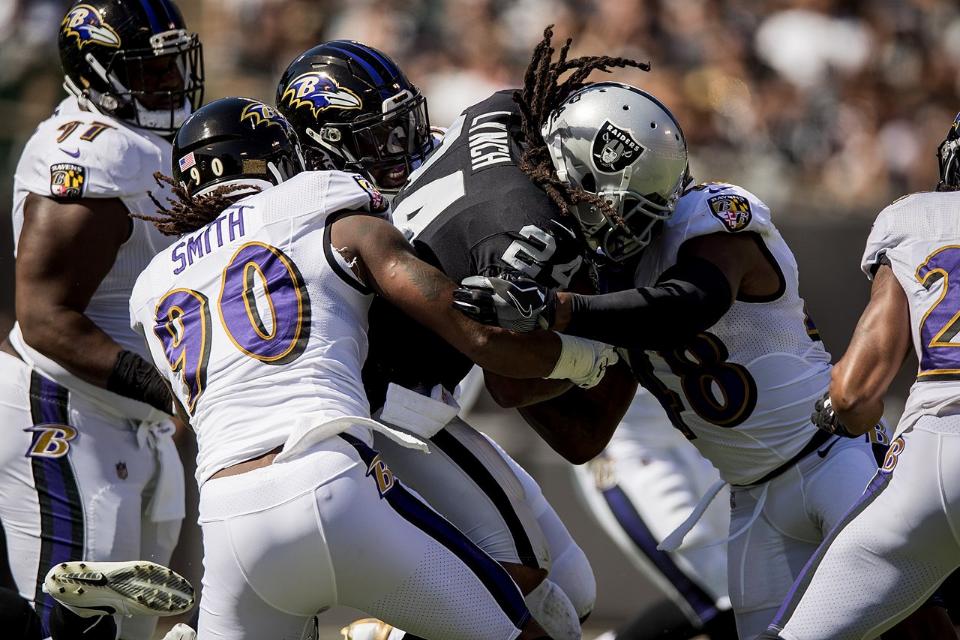 The Ravens also faced similar looks against the Raiders, who were looking to widen the edge defenders so tailback Marshawn Lynch could cut the ball back inside.

Regardless of the formation type, the Baltimore front line needs to be prepared for the zone stretch, and it’ll require the same eye discipline and gap integrity to defend those runs as the bootlegs. If the defensive linemen over pursue, Howard and the speedy Tarik Cohen are fully capable of cutting the ball inside instead of staying on their perimeter pathways.

Minnesota provided the blueprint for defending Trubisky when he’s in the pocket. Mike Zimmer didn’t sit back against the rookie. He would walk his linebackers and safeties up in the box right before the snap, stack their stances so Trubisky couldn’t tell who was coming and who was bluffing, and end up sending both rushers from the slot on an overload rush.

The beauty of these schemes were how well they were executed. Harrison Smith would time his movement before the snap and he didn’t make it obvious that he was the blitzer. Time and time again, Trubisky couldn’t make the protection slide and Minnesota got pressure in his face. Although the Vikings only notched one sack, they were able to speed up his delivery.

Dean Pees showed his share of overloads and slot blitzes last Sunday against the Raiders. He kept his safeties active and stealth. This week, both Eric Weddle and Tony Jefferson should flash from the box and force the rookie to account for them as blitzers when he’s operating from the gun. 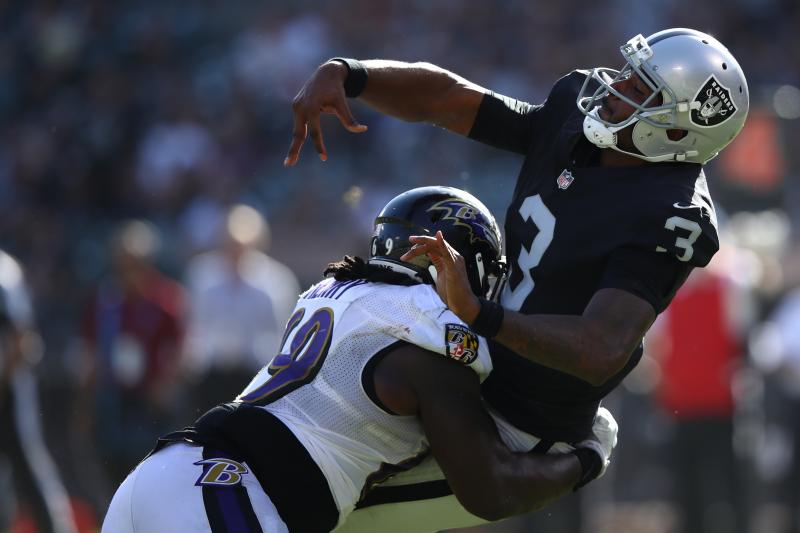 The second-year defensive linemen from Michigan continues to get better and better each week. Last Sunday he played his best game against a dominant left guard in Kelechi Osemele. He was able to go pound for pound against Osemele to defend the run, using his hands to stack and shed at the point of attack. It was an impressive display of power and technique. He’ll have his work cut out for him again against Sitton. Like Osemele, the veteran guard is a powerful guy who can anchor at the point, and he also has the quickness to pull and trap on perimeter runs. Henry will need to maintain his balance and stay on his feet to have success against Sitton.