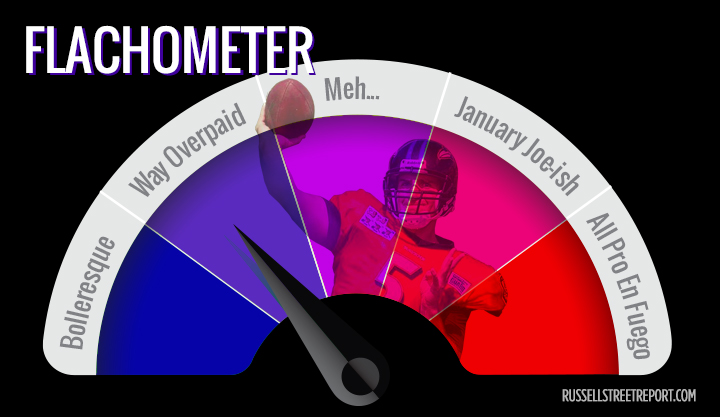 This past week on The Ringer NFL Show, Michael Lombardi had some blunt comments about Joe Flacco. Here’s one of Lombardi’s gems:

“Until they come and have an intervention and admit Joe Flacco stinks, you can forget about Baltimore.”

Lombardi’s criticisms aside, there’s no denying that Joe Flacco has been absolutely dreadful this season, and his numbers reflect that. He’s averaging under 170 yards per game and 5.3 yards per completion which is last in the league, and he ranks 30th in total QBR with only Mike Glennon and DeShone Kizer trailing him. However, to blame the Ravens struggles on Flacco solely, is an unfair assessment. The Ravens have a systematic problem on both sides of the ball and there’s plenty of blame to go around. But if you want to pin their current struggles on one person, Lombardi would be better off starting with the head coach.

The Ravens coaching staff knows what they have in Flacco at this point. He’s an above average quarterback, who can be a little bit of a diva, but can take you deep in the playoffs when he’s surrounded by adequate talent and an offensive coordinator who can get the most out of him.

While Gary Kubiak‘s stint in Baltimore was a short one, it provided a perfect example of the type of coordinator John Harbaugh would have to find to get the most from Flacco. Good head coaches and good leaders in general know how to surround themselves with talented people. John Harbaugh’s coordinator carousel is a reflection upon his inability to find those people. Now he’s forced to stick with Marty Mornhinweg because firing another coordinator mid-season could be his ultimate undoing as well.

Harbaugh hires dinosaurs who aren’t a threat to his job, but the irony in that is that will ultimately probably be what gets him fired. Until the Ravens start hiring coaches like Sean McVay, Adam Gase or Dan Patricia, their offense and team will be a reflection of the coaches who are calling the shots.

Slow, old dinosaurs who are getting lapped by young innovative play callers.