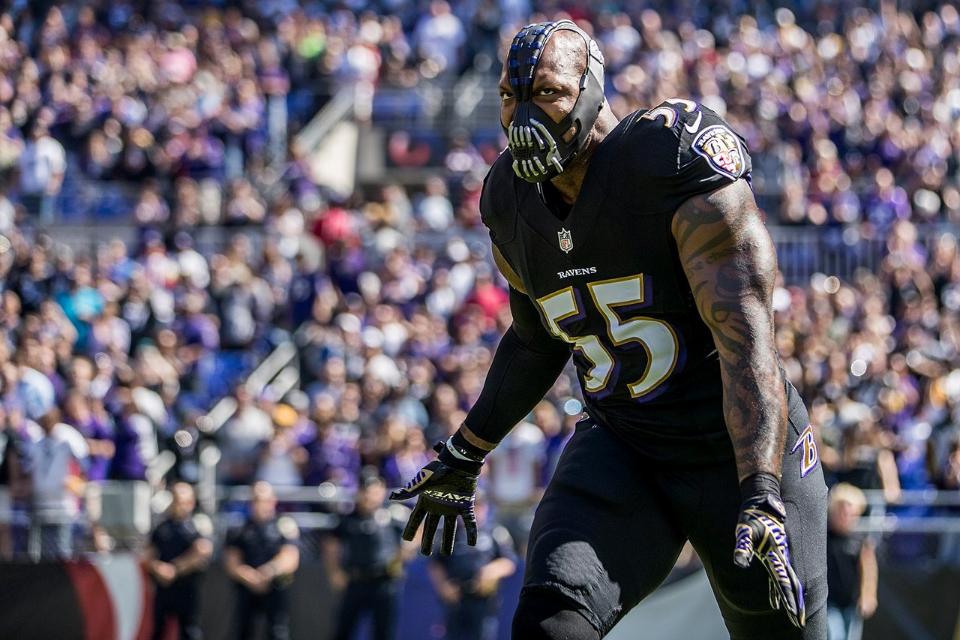 As the Baltimore Ravens enter the second half of the season in a position to make a playoff push, the team will rely on one key veteran on defense to carry the team during key points in games.

Ageless wonder Terrell Suggs has shown no signs of slowing down during his age-35 season, and at this point, it is safe to say that he will be one of the most important players on defense during the final eight-game push.

At 35 with two torn Achilles tendons to his name, Suggs racked up 4.5 sacks during the first half of the season, and has continued to be a force in run defense. For a defense that entered the season desperate for edge-rushing talent, the senior member has been one of the most valuable players.

Let’s dive into just how dominant Suggs has been this season, and why he may very well still have a few years left in the tank.

In run defense, Suggs has been a physical force, using his pure power to seal off run lanes and disrupt plays. Against the Chicago Bears, this was on display.

On a run to the outside, Suggs engages with the tight end and dips his shoulder to work through the block. 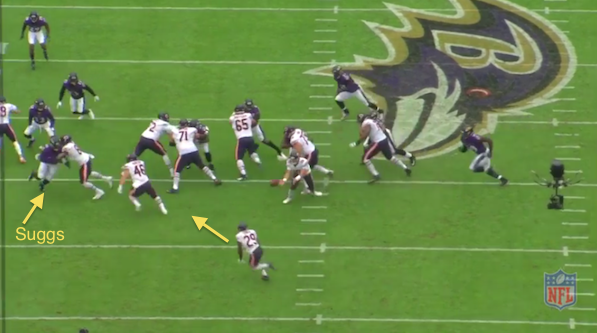 He uses his innate power to simply rip through the block and close in on the ball carrier before the running back receives the pitch. 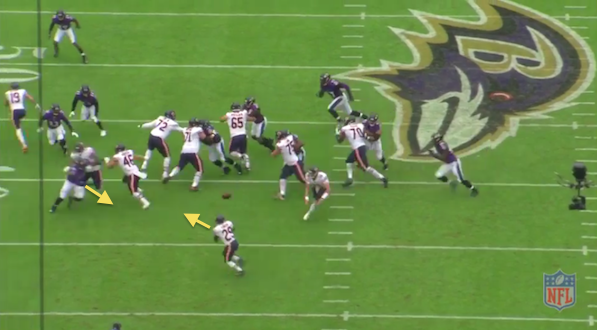 By the time the running back is able to gather himself and start his run, Suggs has already disrupted the defense, blown up the run play and blocked off any chance of a gain. 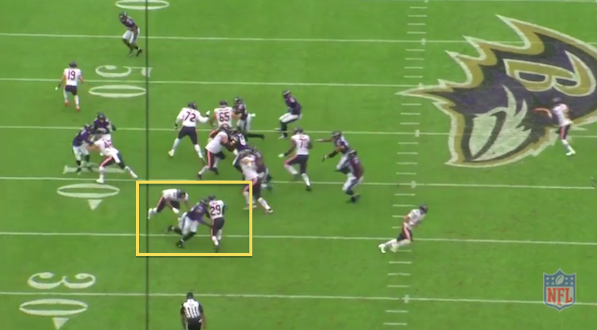 Suggs has always been a force in run defense, but what was needed from him coming into the season was a consistent pass rush.

Since Week 1, Suggs has regularly lined up one-on-one against left tackles and has been able to win isolated plays with ease.

Here, off the snap Suggs engages with the left tackle on the outside. 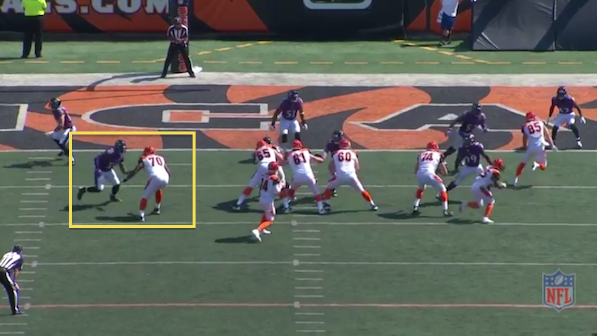 He utilizes his supreme hand usage to engage with the blocker and gain leverage. 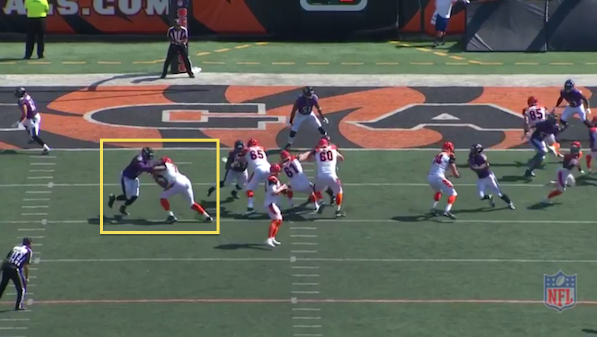 By the time quarterback Andy Dalton has settled in the pocket, Suggs has already shed the block and is able to close in for a sack. 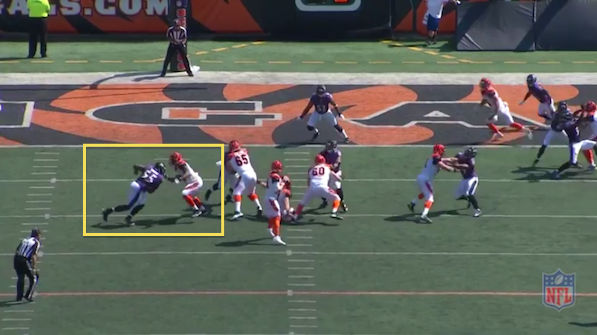 This same type of play was on display again in Week 5 against the Oakland Raiders. Here, Suggs faces another one-on-one play on the outside, isolated without pass-rushing help. 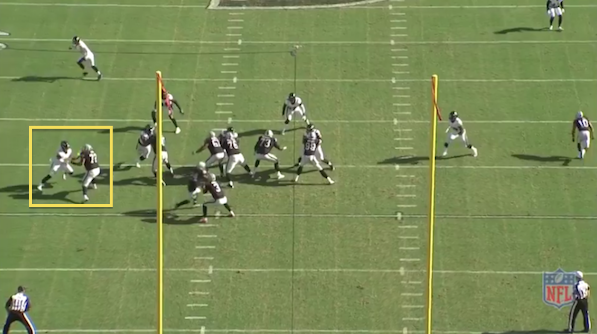 Suggs uses his hands to rip through the block and work his way inside. This is about as simple as it can get for Suggs: engage, power through with his hands and then close in on the quarterback. 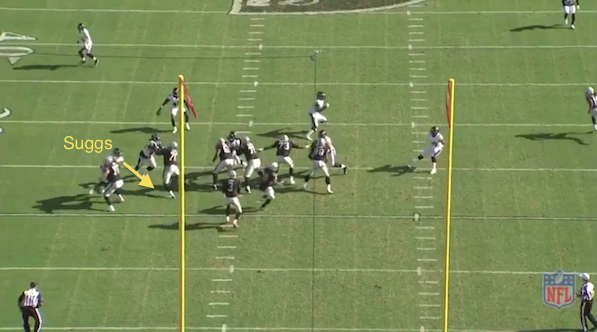 Quarterback EJ Manuel is helpless as Suggs, despite his age and wear-and-tear, quickly closes in for a sack. 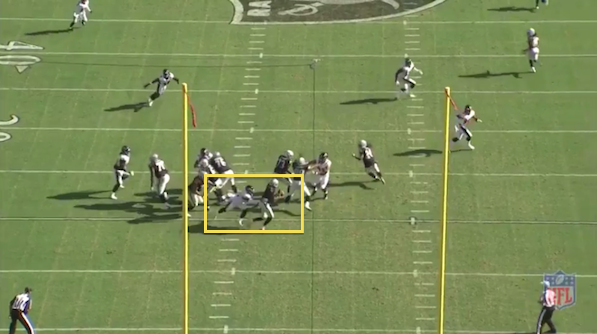 This year has been an enigma of sorts for Suggs. A pass rusher in today’s NFL at 35 with two torn Achilles in five years and a torn bicep injury last season should not be playing the way that Suggs is. Despite the circumstances, Suggs continues to dominate left tackles with ease, and has Baltimore’s defense well-positioned for a potential postseason push during November and December.

If Suggs’ play keeps up, the rest of the defense should thrive as a result, and the Ravens should find themselves right in the thick of things during the final weeks of the season.