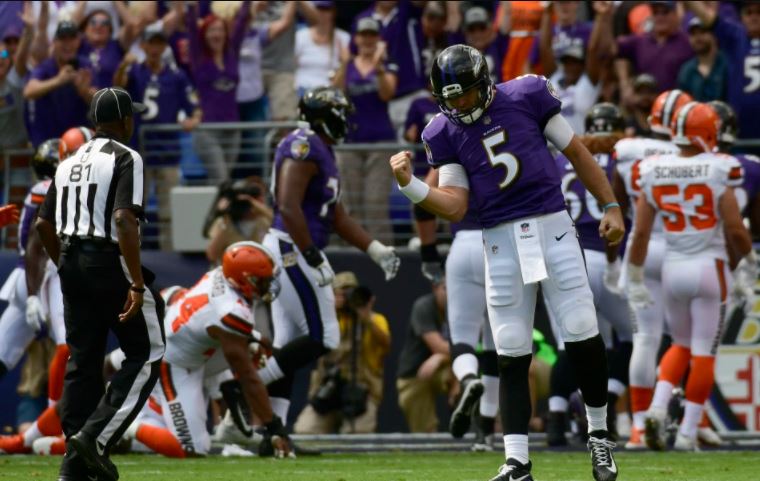 Tracking the Safeties and Moving Them Out of Position

In the last two games, we’ve seen a much different Baltimore Ravens offensive attack. It’s not just the results that have been impressive – scoring a combined 82 points against Detroit and Pittsburgh – it’s how they’ve achieved those results through play design and play-call diversity. The passing game especially has been much more dynamic, incorporating pre-snap movement, pump fakes, and play-fakes to draw defenses out of position.

Quarterback Joe Flacco has used more pump fakes and actual handoff sells than we’ve seen since perhaps the Gary Kubiak days. We even saw him manipulate the Pittsburgh DBs on Sunday Night by throwing his shoulders into the pump fakes and using his eyes to look them off.

The pre-snap deception and manipulation of the Cleveland defensive backs is going to play a major role in how well the offense continues to move the ball against a Browns’ secondary that changes coverages often. They’ll play Tampa-2 (two safeties staying wide to cover two halves of the field and the middle backer dropping in the deep middle), but they’ll also bring their safeties up and keep them active.

Regardless of where the safeties are positioned in the pre-snap phase, Flacco needs to use play-fakes, pump fakes, and his eyes to move them out of position or freeze them from providing help over the top.

It’s amazing what a downfield passing game can do to open up the underneath passing game. For weeks, we’ve seen the Ravens struggle to generate any room for their backs underneath on check downs because the defense has been driving on all their short routes. Against the Steelers, we saw Alex Collins and Danny Woodhead get loose on outlets and flare routes on the sidelines. Both players were able to bail Joe Flacco out at times when Flacco had to sprint up in the pocket and avoid the rush.

Against a Browns defense that will sell out at times with their backers leading the charge, both backs will need to be involved as release valves for Flacco, especially when he identifies a heavy blitz look early in the pre-snap phase.

Although the Ravens’ screen game remains a work in progress, there have been some improvements, and the screen game was effective against Detroit in first-down situations to catch the linebackers out of positions. Screens should be mixed in on first down to slow down the rush.

Keep the Run Game Moving Outside

Coming into this game, the Browns remain outstanding against the run. Cleveland (yes, Cleveland), yields the fewest yards per carry (3.3 yards), and they are sixth overall against the run (as often, teams are able to go run-heavy in the second half to sit on a lead, regardless of the low YPC). Led by inside backer Joe Schobert, and interior defensive tackle Danny Shelton, this is a stingy group that is physical and difficult to root off the ball inside the tackles.

While the sledding is going to be tough up the gut, the Ravens have done plenty of damage off-tackle without needing to slam into an interior brick wall. Behind pulling guard James Hurst, Collins put on a clinic running the sweep from the gun, consistently creasing the Steelers for chunk gains along the sidelines. Collins’ acceleration is special, and he can erase pursuit angles. Moreover, the receivers have done their part to seal the edges to give Collins daylight.

The sweeps and toss sweeps need to be a fixture in this game to force Cleveland to chase outside. But the zone stretch should also be in play to create opportunities for Collins to bounce the ball to the back side. It won’t be easy to run the ball, and Collins will have some bad runs, but offensive coordinator Marty Mornhinweg can’t get away from the ground game. 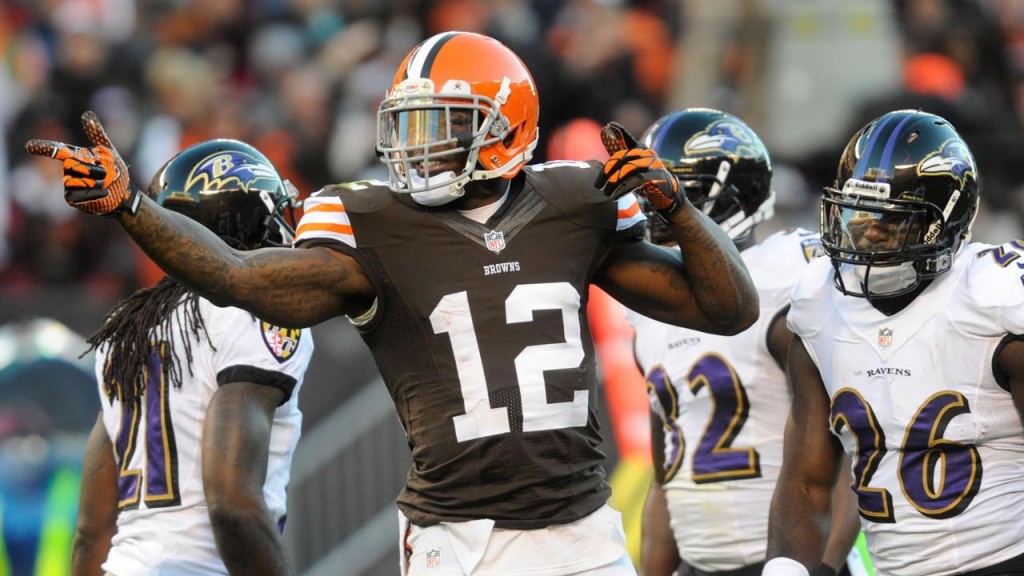 Before I continue down the path of writing this defensive key, I know the chances of employing any sort of “shadow” or “travel” technique to lock up a receiver are slim to none. It’s just not how defensive coordinator Dean Pees schemes his coverages. He tends to keep his CBs on sides. But he’s going to need to consider a different approach in light of the loss of Jimmy Smith. Rookie corner Marlon Humphrey needs to get the call to travel with prolific Browns’ receiver Josh Gordon on Sunday.

Here’s the thing: Gordon won’t just line up to one side of the field. He moves all over. Granted, his route tree is really rooted outside of the numbers. But the Browns will line him in the slot at times to create mismatch opportunities. What makes him so tough is that he’s got deceptive strength to go along with his raw vertical speed, catch radius, and leaping ability.

Brandon Carr has the size and physicality to lock up with Gordon, but he doesn’t have the recovery speed to stay with him. Humphrey does. Coming off a game in which he shut down both Antonio Brown and Martavis Bryant when they lined up to his side, the rookie is ready to be an eraser and contain one of the game’s most dangerous weapons.

In the last matchup against the Browns, Pees elected to rush four more often than not to contain rookie DeShone Kizer’s scrambling ability and his deep ball. Although the defense ended up being in a “bend but don’t break” shell coverage, they ultimately got the better of Kizer because they kept the long ball in check and forced the young QB into three interceptions.

Keeping Kizer’s deep shots in check will be even more of an issue with Gordon back in the fold and Corey Coleman healthy. Those two can easily take the top off.

That’s not to say Pees should show as many vanilla looks as he did in that Week 2 matchup. The heavy dose of disguise that he employed against Kizer in the first half of the game should be part of the game plan. But the primary rush approach should be to bring four and five-man contained rushes and take away the downfield passing game.

Force Kizer to string together methodical drives and test his patience to take the underneath routes. You have to bank on him losing his patience and forcing the issue at some point into double coverage.

Get Your Nickel and Dime Packages Ready from the Start

It’s a copycat league. There’s no doubt that the Browns will mimic a lot of the approaches that Pittsburgh employed in their offensive attack on Sunday Night. That means they’ll detach tailback Duke Johnson from the backfield and motion him out wide (he has experience playing out of the slot anyway). That also means that the Browns won’t wait until obvious passing downs to break out their spread formations. With Johnson providing the flexibility to motion out wide and isolate backers in space, you could see Kizer in the gun operating from empty plenty.

Pees will need to have his nickel and dime out there on the field on first down. Last week, there were too many times when the base defense was on the field against the Pittsburgh shotgun spread. He won’t be facing Le’Veon Bell this week (although Isaiah Crowell can be tough to deal with at times). Still, the emphasis should be to slow down Cleveland’s aerial strike and stop the run with a lighter box. 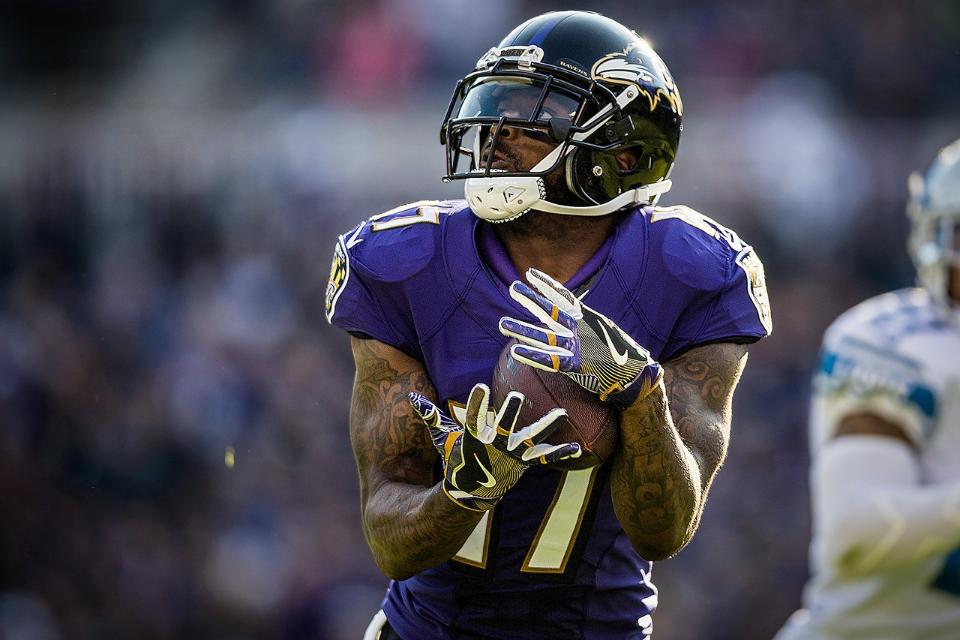 McCourty has been flying under the radar all season long, quietly putting together a Pro Bowl-caliber season. He’s a true cover corner who can run with athletic receivers. However, McCourty has struggled in his last two games against the Packers and the Chargers. He’s not exactly someone you have to completely avoid, although it’s probably the safer route to take. Wallace has been on a hot streak, so it’s hard to image Flacco getting away from him if he’s on McCourty’s side often. The big-play maven has injected new life into the Ravens’ vertical game, and he’s been especially deadly on post routes off of first-down shot plays.